ValueWalk
Home Value Investing The CAB For Which Records Began In 1919 And Correlates With S&P...

At nearly every point along an investment cycle there is always a dizzying array of conflicted investment opinion. Most believe the markets determine economic activity which is putting the ‘cart before the horse’. Every dip in prices is read as the latest reason to fear a major market correction. As long as the majority of investors continue to believe market prices determine economic news, the investment advantage lays with those who ignore price-trend investing and instead follow economic facts. If one knows the driving factors behind market psychology, then one will know the direction of prices. Two of the better economic indicators remain the Chemical Activity Barometer(CAB) and the T-Bill/10yr Treasury rate spread.

The CAB was reported to be at a record high of 121.55 with each of the past 3mos being revised higher. With chemical and plastic production responding to all sectors of economic activity from heavy industry and transportation to food production and medicine, the CAB is a broad indicator of economic activity. The CAB series begins 1919.  Both the CAB and SP500 responded to the strong US$(US Dollar) 2014-2016 with respective stalls-in-trend which related to an Industrial Recession even as other US sectors appeared immune. The SP500 was flat for the period while the CAB rose more slowly. The recent 10% correction in the SP500 has no counterpart in the CAB. Economic activity has continued to expand unabated. This is another instance in which the majority of investors will likely be positively surprised by economic news and drive market prices to higher levels in the months ahead. 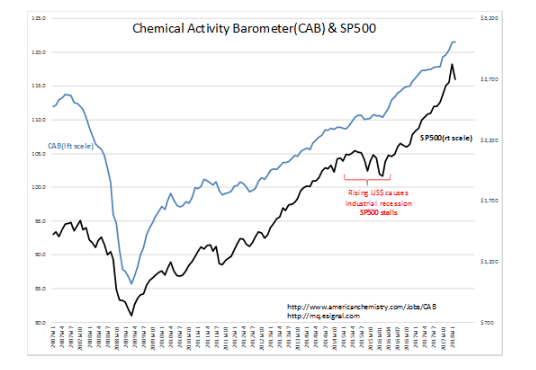 The T-Bill/10yr Treasury rate spread is so often referred to in these notes that it may appear over-hyped, but it remains as the most important of all the indicators which requires its repetition.  Underlying all economic cycles has been the rate spread between T-Bills and 10yr Treasuries. Rising/falling rates have always been viewed by investors as less/more market liquidity respectively. Likewise, Federal Reserve rate increases/reductions are widely seen as negatives/positives respectively for equities and economic activity. This has been accepted market thinking for ~100yrs (if not longer). It is widely believed that the Federal Reserve controls interest rates. History does not reveal a period when investors have thought differently. 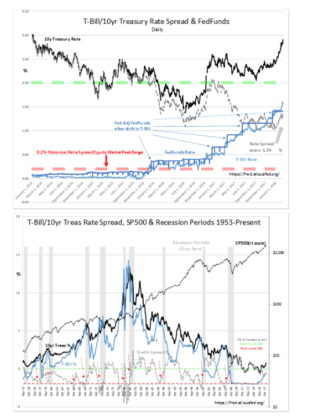 Rising/falling rates by themselves do not signal shifts in financial liquidity. It is the T-Bill/10yr Treas rate spread which is the primary determinant of liquidity. Currently the T-Bill/10yr Treas rate spread is widening which indicates economic activity should accelerate followed by rising equity prices. The CAB confirms this interpretation. The current market price dip should quickly revert back to an uptrend.