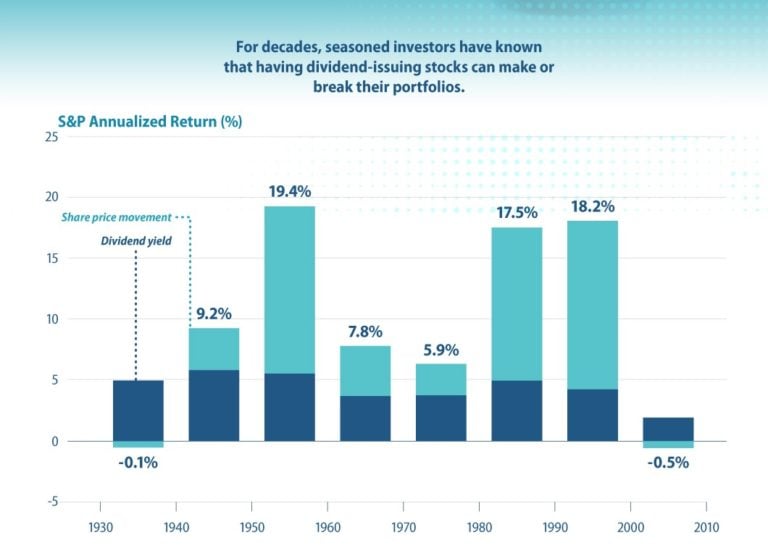 If you start talking about dividend investing at your next cocktail event, it’s possible that other patrons may not see you as the life of the party.

But that’s okay – because while dividends are not necessarily sexy, they are a foolproof way to reel in consistent, predictable returns in the market. And for decades, seasoned investors have leaned on dividends to help power their portfolios through both good and bad times in the market.

What is a Dividend?

When a company earns a profit, it essentially has two options.

1. Re-invest in the business

This is the option chosen by many high-growth companies. They pay down debt, or expand their operations to make more profit in the future.

2. Issue a dividend to shareholders

A dividend is a share of after-tax profit of a company, distributed to its shareholders according to the number and class of shares held by them.

How and when is a dividend issued?

Most importantly for investors, dividends from good companies should be predictable and sustainable. Some companies like Coca-Cola have been paying out uninterrupted dividends on common stock for over a century.

The History of Dividends

The first company to ever pay a dividend was likely a French bank called Société des Moulins du Bazacle, which was formed in 1250.

The Dutch East India Company was the first company to offer shares of stock. It famously paid a dividend that averaged around 18% of capital over the course of the company’s 200-year existence.

The Hudson Bay Company was likely the first North American company to have paid a dividend. The first dividend went to shareholders 14 years after the company’s formation in 1670, and was worth 50% of the par value of the stock.

In the early 20th century, most investors only cared about dividends. At the time, stocks were expected to have a higher dividend yield than bonds to compensate investors for the extra risk carried by equities.

Microsoft declares its first dividend after 28 years of rapid growth.

Today, roughly 422 of the 500 stocks on the S&P 500 pay a dividend, including companies like 3M, Chevron, Walmart, and McDonald’s.

Why is Dividend Investing Powerful?

Most investors are aware of the power of compound interest – and dividends work in a similar way, especially when dividends get reinvested back into the company.

That’s why investing $10,000 in Coca-Cola in 1962 would have yielded more than $2 million by 2012, which is 50 years later. Dividends get reinvested to buy more stock, which produces more dividends, and so on.

The advantages of dividend investing are as follows:

Dividends are a key way for companies to give back to shareholders, and in the right situation, dividend stocks can be a powerful component in an investor’s portfolio.