That innocuous surname has become my one-word rebuttal whenever someone suggests that we need not worry about financial markets.

It may be shorthand … but to those in the know, it’s terrifying.

It’s meant to be.

To me, “Minsky” is a reminder that long stretches of prosperity — such as the one we’ve been in since 2009 — sow the seeds of the next crisis.

Hyman Minsky — “an owlish man with a shock of gray hair,” as The Economist describes him — proposed what he called the “financial instability hypothesis.”

Minsky’s hypothesis did something most mainstream economists don’t do: He included empirical evidence of human nature in his model.

By contrast, his peers — and policymakers — relied almost entirely on abstract models. And they thought the structure of the financial system was irrelevant.

Minsky argued that this was bunkum. In the real world, the level and type of debt in the economy drives major economic cycles. We ignore it at our peril.

Post-2008, economists have started to use the term “Minsky moment” to describe when credit markets begin to deleverage after an extended period of rising debt levels.

Economies with strong cash flows and low debt levels are stable. But economies based on speculative and, especially, Ponzi finance are vulnerable to sudden collapses.

If asset values start to fall, either because of monetary tightening or some external shock, overindebted households and firms are forced to liquidate their positions. This burst of selling further undermines asset values, making things worse. Things spiral out of control.

Obviously, the way to avoid Minsky moments is to stick to safe and sustainable financing.

But when the economy is humming, and interest rates are low, the temptation to take on debt is irresistible.

Everything is fine until it’s not.

How Minsky Are We?

Let’s look at some indicators of debt.

First, global debt, including public, private and corporate debt, has increased substantially since 2007. The main drivers are the U.S. and, especially, China: 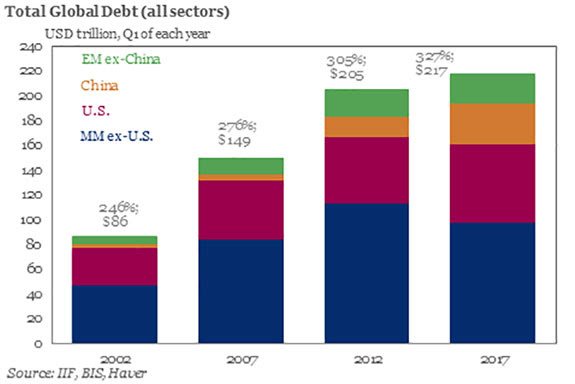 Within that global debt, nonfinancial corporate debt grew by 15% from 2011 to 2017 — from 81% to 96% of global gross domestic product (GDP). The total debt burden of all global firms is now almost equal to the world’s annual economic output.

Moreover, the proportion of highly leveraged firms — those whose debt-to-earnings ratio exceeds 5 — was 37% in 2017, compared to 32% just before the global financial crisis.

Within the U.S., unsecured consumer debt has increased substantially since 2007, driven mainly by student debt. But total credit card debt today is about where it was then (red line below): 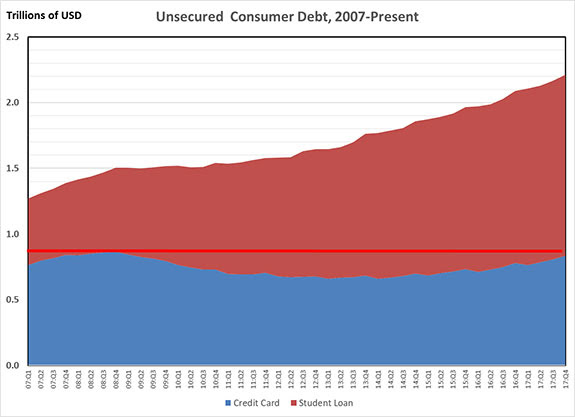 After declining until 2013, U.S. commercial and residential mortgage debt outstanding has resumed its steady march upward: 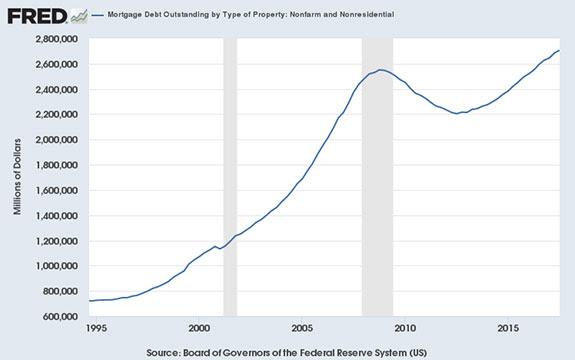 During the same time frame — roughly starting in 2013 — U.S. consumer debt repayment as a percentage of disposable income grew from under 5% to almost 6% today: 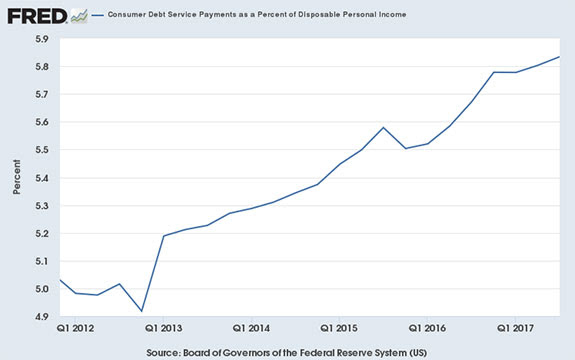 But here’s the one that worries me: Margin debt on brokerage accounts.

Margin debt is the mousetrap of the U.S. economy. It springs into action quickly, when equity values decline, and brokers call it in. Forced selling leads to a mini-Minsky moment in the stock market as sellers outnumber buyers.

It tends to peak just before big collapses — like the dot-com bust and the 2008 crisis. Its upward run since 2008 is quite spectacular: 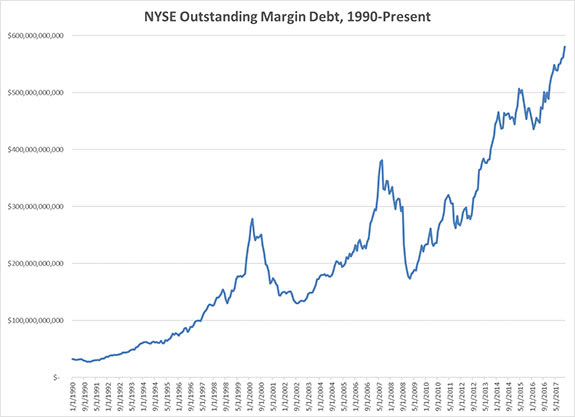 Keep a Weather Eye for the Minsky Moment

Sailors like me know to keep a “weather eye.” Merriam-Webster defines it as “1: An eye quick to observe coming changes in the weather. 2: Constant and shrewd watchfulness and alertness.”

That sounds like very good advice right about now. Low interest rates have encouraged a lot of borrowing around the world. Consumers, firms and governments have taken advantage of these rates to try to recover ground lost since 2008.

But even though we’re in a so-called “coordinated global upswing,” forecast global GDP growth is still in the 2.5% to 2.8% range. That’s just not enough to generate the real economic income needed to pay down the gobs of debt hanging off the global economy — especially the two biggest players, the U.S. and China.

My advice: Enjoy the good times! But keep a good weather eye out for the next Minsky moment. And in the meantime, explore the many ways you can protect your wealth — before it comes.