The Treasury Department estimated that it will borrow $955 billion in FY 2018. If the amount is correct (and it may not be), it will represent an 84% increase over the $519 billion Treasury borrowed for FY 2017.

This huge increase is clearly not taking us in the right direction, and it’s more than can be accounted for by lower tax revenues. Nor is it a one-time blip. The same report forecasts borrowing of $1.083T in FY 2019 and $1.128T in FY 2020.

The budget that has now been passed by the Senate and is likely to pass the House will add another $300 billion to the deficit over just the next two years. We are going to exceed $1.2 trillion in average debt for the next three years. And that’s just the on-balance-sheet deficit.

What’s the problem, you ask?

The answer will get us into some little-examined and perhaps arcane fiscal policy issues. They are nevertheless important.

In short, the budget deficit and the amount of government borrowing (for the year) are two different things.

The official deficit increasingly understates the problem… and I think markets are starting to realize that.

Politicians like to talk about managing the federal budget the way you manage a family budget. This rhetoric makes for good sound bites but ignores an obvious reality.

For one, you can’t set your home budget and then add additional expenses without changing your budget parameters. The government can do so, and it does.

These are the so-called “off-budget expenditures” you may have heard about. They don’t affect the official deficit that is discussed in the press. They do affect the amount of cash the government needs.

Where does it get that cash? It borrows it by issuing Treasury paper.

Off-budget expenditures pay for a variety of programs: Social Security, the US Postal Service, and Fannie Mae and Freddie Mac are among the more familiar ones.

On top of that, the category includes things like disaster relief spending, some military spending, and unfunded liabilities that turn into actual costs. Federal student loan guarantees sometimes force the government to disburse cash. That’s an off-budget outlay.

Off-budget outlays have risen in part because they include Social Security benefits, and the Baby Boomer generation is retiring. But the other categories mentioned above have grown as well, and they are becoming more and more problematic.

The Treasury Department has to juggle the government’s cash flows to pay the people and businesses Congress has decided should be paid. When there isn’t enough tax revenue, Treasury must borrow to meet the difference.

Any unforeseen decrease in tax revenue or increase in expenses can force it to borrow more. This activity has nothing to do with the formal “budget” even when we have one, and we currently don’t.

Do you remember a headline mentioning annual trillion-dollar increases in the US debt during the last eight years of the Obama administration? I didn’t think so.

The problem has been papered over by off-budget receipts, mainly Social Security taxes, that give the US Treasury more cash it can disburse. But eventually the benefits those taxes represent come due. Then outlays go up, but revenue may not. We are rapidly reaching that point.

Look at this table, which I found here and excerpted: 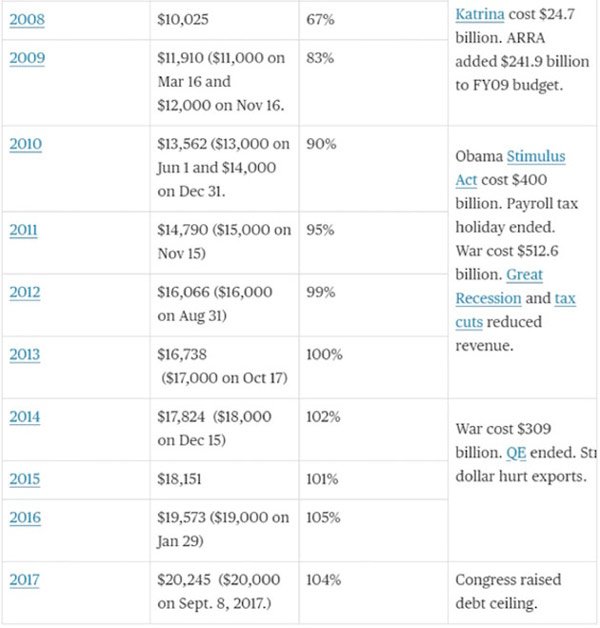 You will notice that there are many years during which the US debt rose by more than $1 trillion. Note that 2015 saw an increase of $1.4 trillion, while the on-budget deficit that year was “just” $439 billion.

Look at this chart of the on-budget deficit for the last 10 years. Comparing to the above table, you can see that off-budget deficits have been running more than $500 billion recently.

Some years not so much, but the general trend has been from the lower left to the upper right.

The End of Interest-Free Financing

It has kept short-term rates ultra-low, allowing the Treasury to borrow tons of cash with minimal financing costs. The Fed also bought Treasury bonds directly as part of its quantitative easing programs.

Since the Fed sends most of the interest it receives right back to the Treasury, those bond purchases amounted to almost interest-free financing. The average interest paid on the US debt has been reduced to less than 2%.

This is largely because Treasury has loaded up on short-term debt in order to reduce the interest-rate costs that must be allocated to the budget deficit each year.

So rather than focusing on long-term debt with the 30-year at an all-time low, Treasury has been selling short-term bills and notes. That’s good cash management in the short run and very shortsighted in the long run.

Both those factors are now changing.

The Fed is actively raising short-term interest rates while also reducing its Treasury bond purchases. This increase will raise Treasury’s interest costs considerably. And the interest must itself be financed, so that requirement will drive borrowing needs yet higher.

Do you think the chances are good that the Treasury will be able to finance its debt at 2% in 2019? Me neither. And with $20 trillion total debt, even a 0.5% interest rate increase will have an impact on the overall budget deficit.

Where Will We Get the Cash?

The important point here is that the Federal Reserve balance sheet reductions are just now getting started. The pace will quicken.

In January the Fed’s Treasury bond assets dropped by $18 billion. The combined total Treasury and mortgage bond balance is set to fall $420 billion this year and another $600 billion in 2019.

That number will continue to fall at that pace until either the balance sheet reaches zero or the Fed decides to stop.

This path would be fine if the Treasury’s cash needs were likewise falling. Instead, they are rising.

That $1 trillion that the Fed is going to sell back to the market will cost the Treasury a minimum of 2% and probably closer to 2.5%. That increases the deficit by $20–$25 billion a year.

So let’s add it up. The federal deficit will be north of $1.1 trillion. Let’s assume the off-budget deficit actually drops to $400 billion and that the Federal Reserve is going to want to sell $460 billion into the market. (Note: some of that will be mortgages, and the rest will be US bonds and bills.)

Simple arithmetic suggests that we will need to find about $2 trillion in additional funding to buy government debt in 2018. And candidly, that may be an optimistic projection.

Which brings me to my main question: Where will we get the cash?