ValueWalk
Home Info-Graphs The Top Tourist Attraction In Every Country 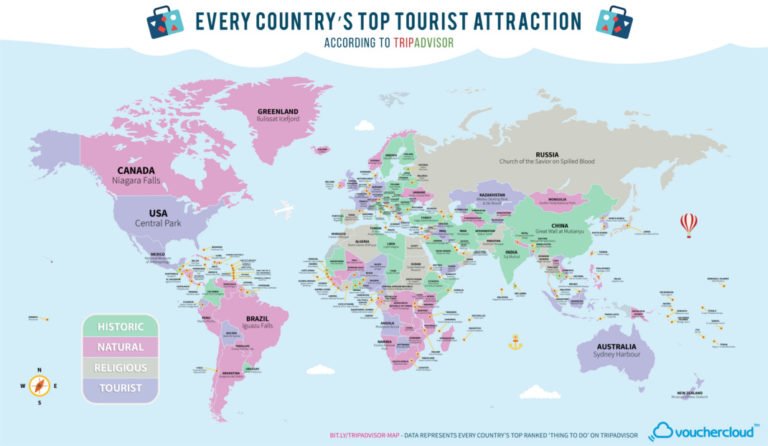 Even as early as a decade ago, if you were backpacking in a foreign place, it was not uncommon to rely on the wisdom printed in travel guides such as Lonely Planet or Rick Steves to choose your day-to-day activities.

“Go off the beaten path to see this secluded black sand beach that’s only used by locals.”

“See this historic city tour, because it’s a hidden treasure that you won’t find in any other guidebook.”

Tips like these felt like secrets only privy to you and other smart readers – and while you were sitting on that hidden black sand beach, you could revel in the fact that the rest of the travelling masses were stuck in a two-hour line to get into some silly tourist trap.

For better or worse, things are now very different.

Today’s infographic comes to us from Vouchercloud, and it shows the top rated “Thing to Do” for every single country in the world, according to Tripadvisor reviews.

In other words, the list is based on the amalgamation of millions of reviews from fellow travelers that have experienced these sights or activities first-hand.

On the upside, these reviews are coming from your peers. People just like you have rated all of the attractions in an area – from tourist trap to hidden gem – and the end result is pretty fair and democratic.

But this democratic component also has a downside. In the United Kingdom, for example, the highest rated activity is not seeing Big Ben, Ancient Roman baths, Stonehenge, or the Churchill War Rooms – it’s the Harry Potter Studio Tour, with 32,000+ reviews and 83% of reviewers giving it a perfect 5-star rating.

While the Harry Potter tour is obviously a popular attraction, it’s not likely representative of the type of attractions that old school travel critics may have raved about in their travel books.

Top Things to Do

In the map, the top tourist destinations are broken down based on the type of attraction.

Here’s the mix of top destinations for the 197 countries and jurisdictions included in the analysis:

The top category of attraction is natural (38.6%), which includes places like Canada’s Niagara Falls or Norway’s Geiranger Fjord. Meanwhile, historic attractions like China’s Great Wall made up 27.4% of the total, and places of religious significance such as Thailand’s Temple of the Reclining Buddha were the top tourist attraction for 14.7% of the countries.

The remaining category, called “Tourist” includes a much wider variety of destinations within it.

These attractions range from Central Park in the New York City to the aforementioned Harry Potter Studio Tours in the United Kingdom. The wide category also includes museums like France’s Musee d’Orsay, which holds a staggering collection of impressionist art, as well as Germany’s Miniatur Wunderland, which is a massive miniature railroad in Hamburg.