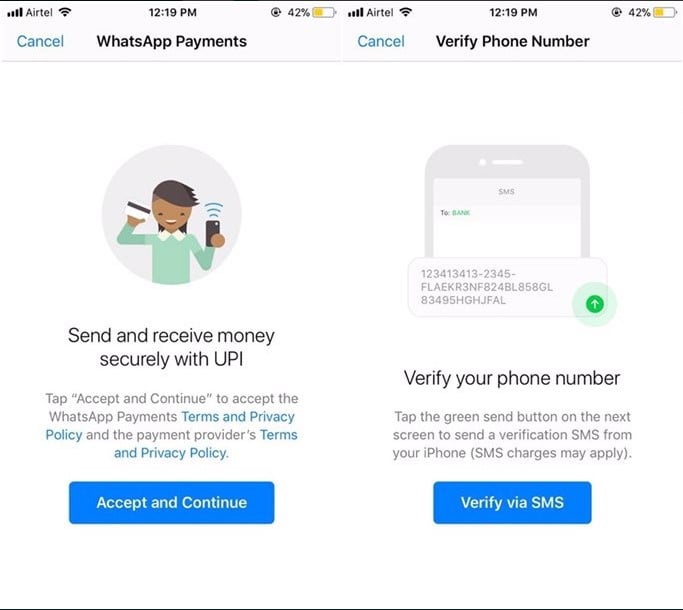 Several leaked screenshots have recently appeared online which seem to show the interface and experience of using the WhatsApp payment feature.

We’ve known about the WhatsApp payment feature for more than a year at this point, but we’ve only seen screenshots and a confirmation that it may be coming soon with these leaks the past few weeks. The screenshots, tweeted out by @WABetaInfo (courtesy of @nagenderraos), give us the first real look at what we’ll see from the upcoming service.

It had been previously speculated that the WhatsApp payment feature would initially be rolled out to Indian customers with its first launch, and that still remains a possibility as Indians are one of the biggest markets for WhatsApp. While WhatsApp does enjoy a decent user base in the United States, the service is not nearly as prevalent here as it is in Europe and Asia where it’s become the go-to messaging service in place of SMS.

As you can see from the screenshots, the banks are listed in no real order under the “Select Your Bank” menu within the app itself. The payment feature appears to confirm that the actual transfer of the money will be done through the United Payments Interface which is well-known for the seamless transition and security it offers users. If all goes as planned, the WhatsApp payment feature should launch without a hitch and provide a valuable service to users of the app worldwide.

The United Payments Interface is regulated by the Reserve Bank of India, which is another indication that the WhatsApp payment feature will make its first appearance within the country. The interface has been designed to instantly transfer a certain amount of funds between two bank accounts through the mobile platform. Many Indian users use the Trucaller service, which also takes advantage of the United Payments Interface technology.

It remains to be seen how accurate these screenshots of the WhatsApp payment feature actually are, but if they are to believed it’s looking as if the setup and transfer of funds may be completed in just a few steps. This will offer WhatsApp users within India a convenient way to transfer funds that is fully backed by the Reserve bank, adding yet another useful feature to one of the most popular apps in the country and around the world.

WhatsApp is owned by Facebook, and it seems as if the parent company is spreading its money transfer services over various apps in order to cover the most ground. Facebook messenger isn’t nearly as popular in many areas as WhatsApp, so the fact that the social media giant is using an existing platform to deliver useful features to their customers is a good move for their users as well as a good business decision.

In India in particular, the WhatsApp messenger is used quite often in order to conduct business, making it the perfect place to launch the payment feature. Provided its successful with an alleged first launch in the country, it’s likely that Facebook will roll out the WhatsApp payment feature to the rest of its users around the world. The technology seems like it’s decently far along in development, so users within India should expect to see the ability to make payment through WhatsApp coming in the next few weeks.