Does it pay to be a buy-and-hold investor in equities? The evidence raises awkward questions.

Risky assets can generate lower returns over the long run.

Do you believe that taking riskier equity exposures should reward you with higher returns? Most finance education is founded on the idea that higher risk leads to higher returns. Taking incremental risk would not be worthwhile otherwise. Over the long run (past 10 and 20 years) global and regional equities have not fulfilled that expectation. In fact, the relationship between risk and realized reward appears to be the reverse of what was expected! 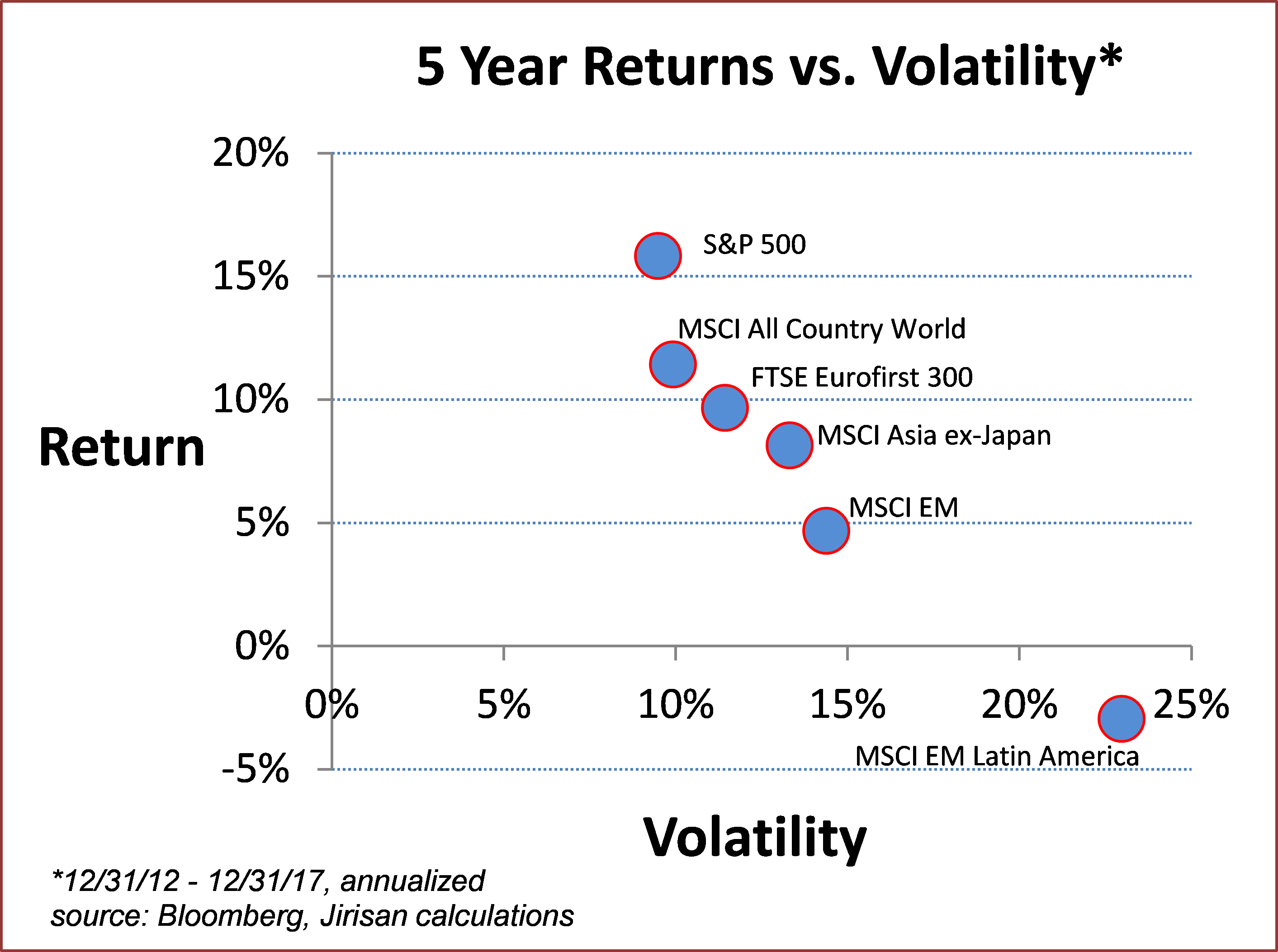 Riskier equities generated lower returns. This result is a two-handed slap in the face for anyone who still believes that markets are efficient. Despite the huge advantage of having excluded the perennial basket cases of Venezuela and Argentina (for most of the decade), the Latin American index rewarded investors with the highest volatility and negative annualized returns. A $100 investment in Latin America would have been whittled down to $87, after having suffered 28% annualized volatility and a worst drawdown of 61% that lasted 9 months.

Performance in EM equities and the Asia region was not much better. If you believe that long term equity returns should surpass that of Treasury bonds, you would have been extremely disappointed with equities as an asset class over the past decade. 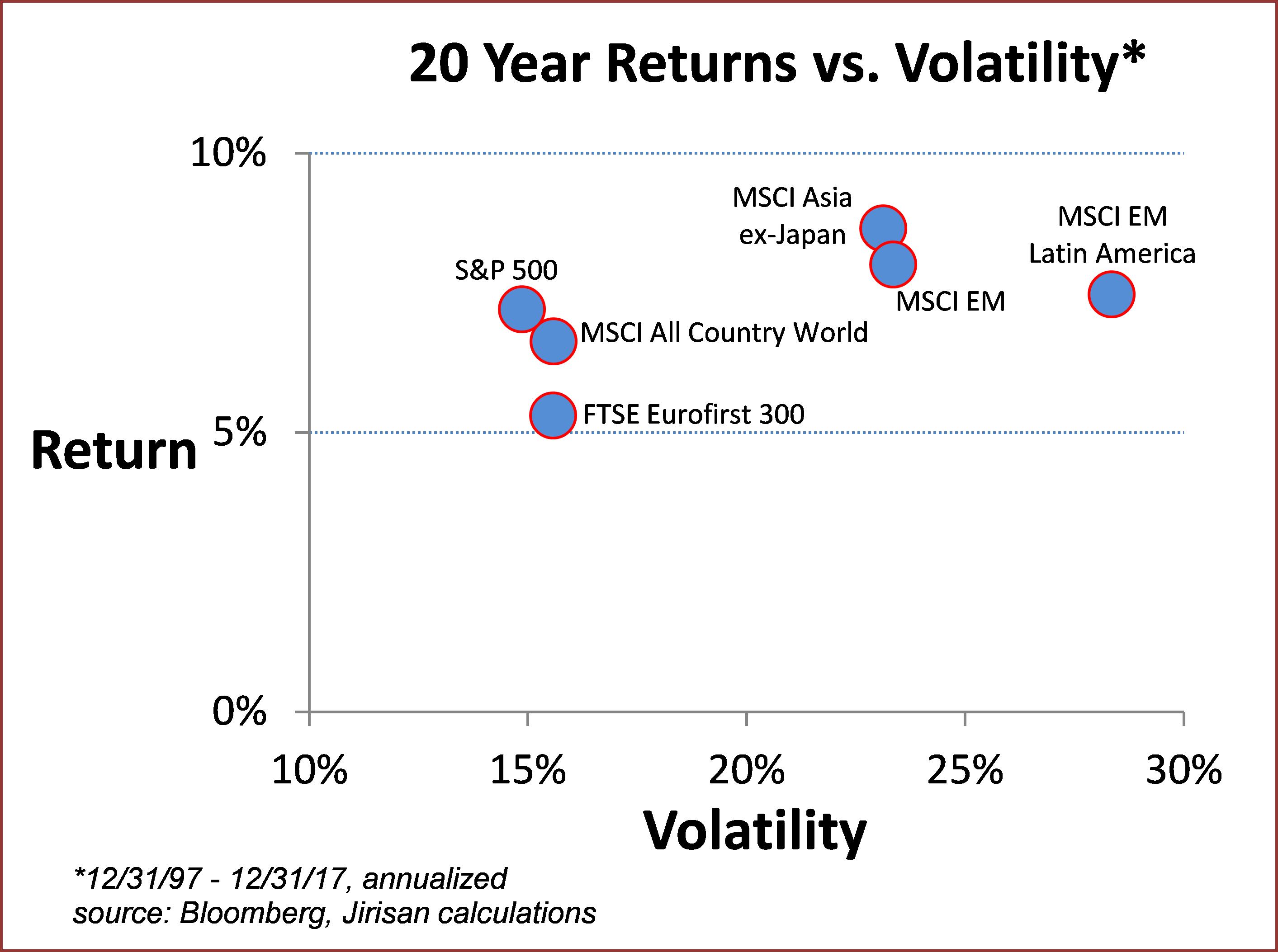 Even the S&P 500’s 8.5% annualized return is cold comfort when you consider that the Barcap 20+ year U.S. Treasury Index had a total return of 6.6%. The S&P 500’s realized excess return of 1.9% (excluding tax effects) includes a worst drawdown period of 14 months when the index lost 48%. For those who might point to the superior drawdown management of active equity investors, many active managers performed even worse than that.

Maybe 10 years is too short a time period to consider buy-and-hold horizon returns. What does it look like over the past 20 years? This time, the news is better (but not good!) for the typical MBA curriculum – there is the barest hint that riskier markets generated slightly higher returns.

But the weakly positive slope here is not convincing. Although the next 10 to 20 year period may not have a similar outcome, the risk/return profile over the past 10 and 20 years should make the thoughtful investor rethink the relationship between risk and reward. Over the past 20 years, the realized equity risk premium for the S&P 500 was 0.20%. Yes, that’s right: 20 basis points. In addition to the -48% drawdown experience during the Great Financial Crisis of 2008, the S&P also lost 45% during the early 2000s. I wouldn’t fault anybody for thinking that buy-and-hold equity risk was not worth the heartache. Indeed, a retiree would have to have an almost religious faith that markets will rebound from such a loss. But after demonstrating such faith after the first 10% drawdown, then 20%, 30%, 40%, at what point does faith dissolve in a pool of tears?

Changing our focus to markets operating in regions of highest economic growth, Asian equities returned 8.7% annualized over 20 years, only 1.5% better than the S&P 500, and 1.7% better than the Barcap 20+ year Treasury Index. During this period, Asian equities had two periods of horrendous drawdowns. The first occurred during the late 1990s, when the MSCI Asia ex-Japan Index incurred a 51% loss. During the Great Financial Crisis, it lost 61%.

And in case you wonder how risk vs. return looked over the past 5 years, here it is:

Those who object that volatility is a poor proxy for risk are correct. Worst drawdowns (i.e. losses from a previous high) are more important for most asset allocators and retirees. Here’s a chart showing returns vs. risk, as quantified by worst drawdown. The strongly negative slope in the relationship between returns and risk should, again, cause long term investors to question what they’re getting per unit of “risk” in these markets, especially when they are on the buy-and-hold bandwagon. 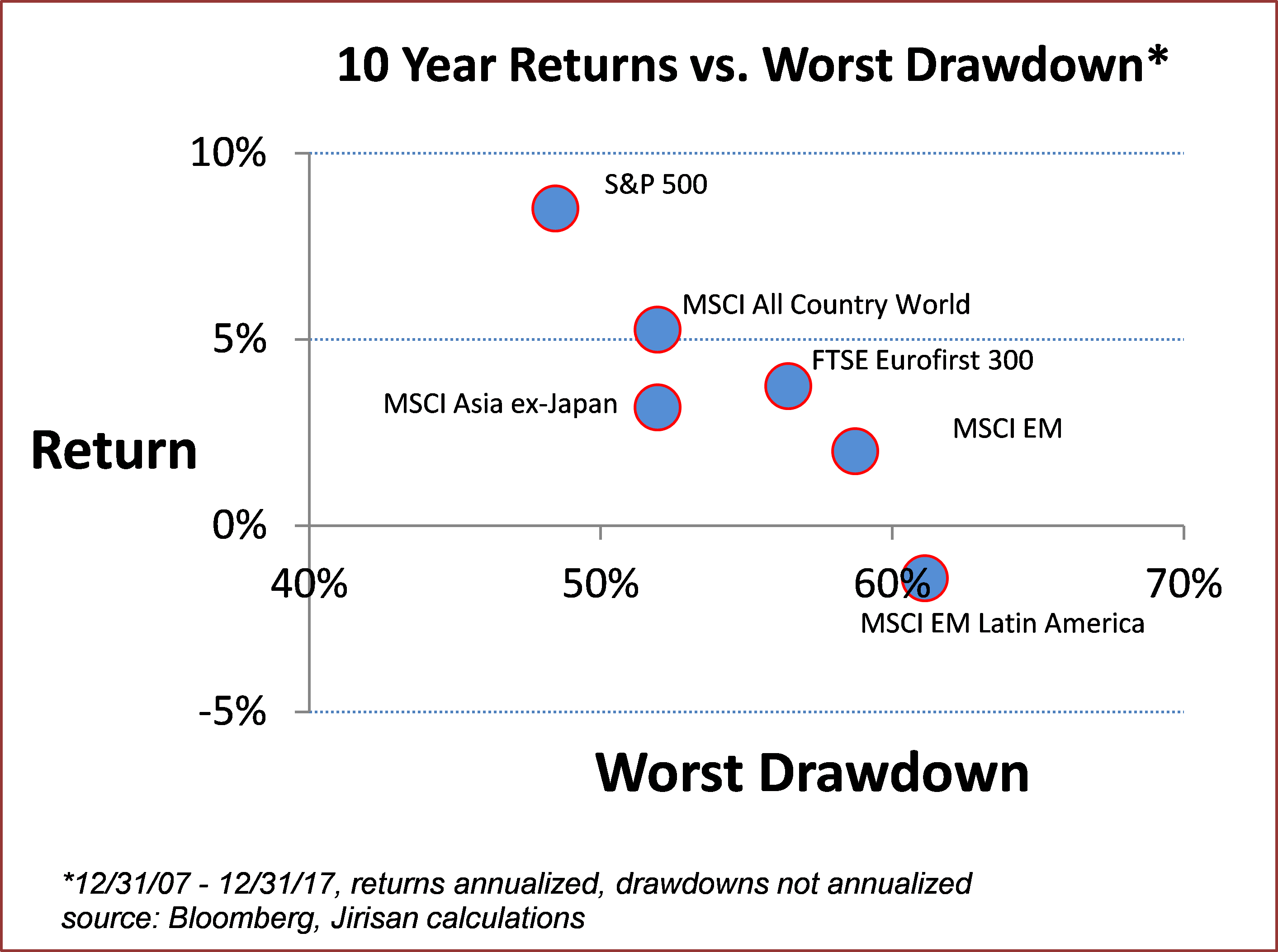 These observations may be of little interest to investors who are locked into a single equity silo (e.g. long only EM equity managers). However, for those with the freedom to hold other asset classes, the material may provide food for thought. Even for die-hard fans of the buy-and-hold philosophy, a nod toward asset dynamism was made by none other than Warren Buffett. He clarified in the 2016 Berkshire Hathaway shareholders’ letter that he isn’t a buy-and-hold investor when he is a minority shareholder in public equities.

Gerald Hwang is chief investment officer at Jirisan Capital, an investment firm focusing on global investing across multiple asset classes. He was formerly a portfolio manager at Matthews Asia and Vanguard. He graduated from The Wharton School with an MBA in Finance and Yale University with a B.A. in Comparative Literature. He holds the CFA charter.