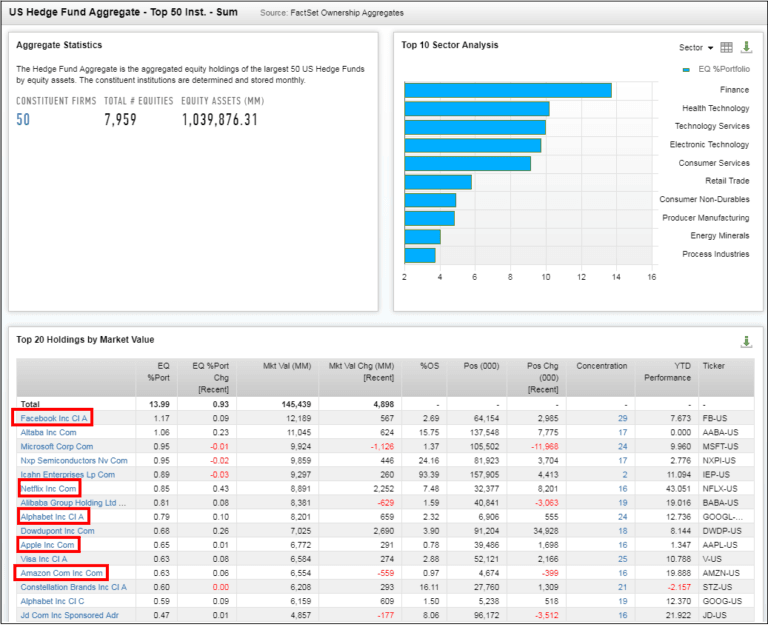 There’s been an ongoing debate on whether Facebook, Amazon, Apple, Netflix, and Google (collectively known as FAANG), and the technology sector in general, are overvalued and in the process of forming a bubble similar to the dotcom boom of the early 2000s. Ownership trends, performance, and valuations can provide insight on whether or not FAANG securities are overcrowded and potentially heading towards a “FAANG bubble.”

Hedge fund holdings typically garner a lot of attention from investors, and the U.S. Hedge Fund Aggregate (the aggregated equity holdings of the 50 largest U.S hedge funds) below gives a sense of how and where the hedge fund community is placing bets.

What Are Hedge Funds Buying?

Current holdings aside, let’s look at what the top hedge funds are buying and selling. Technology Services leads all sectors in terms of market value increases, an area where Facebook and Google are large players. However, hedge funds seem to be scaling back their positions in these securities and appear to be scattering their bets in this sector. Only one Technology Services security was listed in the top 10 list of increased positions by hedge funds. These funds may be hinting that the Technology Services sector is undervalued, but the individual securities held are less important than the overall sector exposure.

Consumer Services was ranked the third highest sector for increased market value. Netflix is one of the notable Consumer Services standouts, coming in second of all securities by market value increases across hedge funds. In addition to Netflix, hedge funds also increased their purchases of Comcast and Tropicana Entertainment from this sector. Unlike Technology Services, Consumer appears to be more about stock selection rather than overall sector exposure.

To round out FAANG, we also need to look at Apple (Electronic Technology) and Amazon (Retail Trade). Neither of these sectors had heavy inward or outward movements; however, Electronic Technology had two securities in the top 10 list of increased positions by hedge funds: Micron Technology and Qualcomm. Similar to Netflix and Consumer Services, hedge funds are trying to pick a few good stocks out of a relatively quiet sector. On the other end of the spectrum, Retail Trade didn’t have any securities in the top 10 list of increased positions, however they did have two securities in the top 10 of decreased positions—O’Reilly Automotive and Dollar Tree. A diversified Amazon seems to be giving hedge funds high hopes for the company compared to some of its peers.

Out of all of the FAANG securities, only NFLX had a top 10 net increase by hedge funds, suggesting they are starting to look outside of the group for outperformance.

Is There a FAANG Bubble?

While FAANG stocks have historically displayed positive performance, there has been speculation that these large cap tech stocks could be displaying behavior similar to that leading up to the dotcom crash in 2000. Let’s look at some of the performance metrics of FAANG vs. S&P 500 and its contribution to the index in 2017.

Despite only comprising 10.2% of the weight of S&P 500, FAANG stocks have contributed 4.34% of the S&P 500 total return of 21.8%. These five companies as a group combined for a weighted average total return of 46.9%, significantly higher than any other GICS Sector, and more than double the next highest sector return (excluding Information Technology).

Looking ahead, analysts are expecting 20% EPS growth over the next three to five years for FAANG stocks. This is significantly more than the 12% expected for Information Technology companies, and the 12% expected for the S&P 500 as a whole. Turning to valuation multiples for these securities, Facebook and Alphabet are only slightly above their industry average, trading around 34x and 35x earnings, respectively. However, Amazon and Netflix investors are optimistic for earnings increases, with P/E multiples coming in at 296 and 153, respectively. To round out the FAANG stocks, Apple is trading at a “cheap” 18x earnings, well below the Information Technology sector. The price/cash flow multiple for FAANG is the highest among all sectors, with Amazon leading the way, trading at 45x cash flow.

What does this mean for hedge funds? Wall Street analysts have high expectations for growth for these securities. If these companies experience a slowdown in growth, will hedge funds be patient and wait it out? Or given the significant return of this group last year, will they lock in their profits?

Hedge funds have taken significant positions in FAANG as these securities make up five of the top 12 largest aggregate hedge fund positions by market value. However the recent increase in price appears to give most of the FAANG stocks a “hold” rating from hedge funds, as there have been no major increases or decreases in these positions, with the exception of Netflix. Though comprising a relatively small weight of the S&P 500, FAANG certainly performed well and contributed approximately a fifth of the total return to the bull market last year. However, some of the valuations may raise eyebrows as they could remind investors of the multiples seen in the early 2000’s.