The main story for companies in 2018, particularly in the credit markets, is going to be the story of cash and gross debt reduction, that’s according to a report from the credit team at Bank of America Merrill Lynch.

Following the passing of the tax reform bill at the end of last year, cash repatriation is on the cards for many companies this year and managements were all too happy to disclose their plans for bringing cash back into the United States on fourth-quarter earnings conference calls.

This tidal wave of repatriated cash is going to have some interesting impacts on the market, and while we do not know what exactly will happen over the next eight months, there are several key themes worth keeping an eye on according to the Bank of America report.

For a start, some of the S&P 500's largest and most creditworthy borrowers are now no longer going to need to rely on the debt markets as heavily as they have been in the past. Companies like Apple and Johnson and Johnson, as well as Coca-Cola, which has already stated its intent to pay down some of its gross debt by bringing cash back home.

As the report notes:

"First of all we think a big decline in debt issuance volumes is implicit throughout, as for example in AAPL’s decision to bring their $163bn net cash position to zero, and in some cases explicit. Like JN J’s statement that “we’ll no longer need to borrow for US purposes.” It is also clear that a number of companies plan to on top of that pay down debt including KO saying today that “The company plans to reduce its gross debt by approximately $7bn with cash currently held overseas” and AMGN’s statement that “we could find it prudent to pay some upcoming debt maturities in cash rather than refinancing in the market”

The knock-on impact of this is that "financial markets are losing one of the biggest providers of funding in the front end" a development which the team at Bank of American believe is "impossible to overstate."

A declining level of demand from borrowers coupled with already rising interest rates is already leading to some strange developments in the market according to the analysts.

Stress in the commercial paper market and liquidations over the past two weeks of one to three-year paper, point to the conclusion that foreign investors are already finding the cost of dollar hedging to be too high and credit spreads in the front end of the curve could increase substantially throughout the rest of the year. 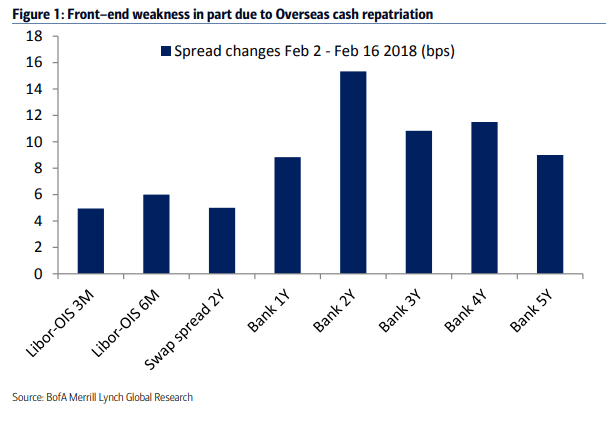