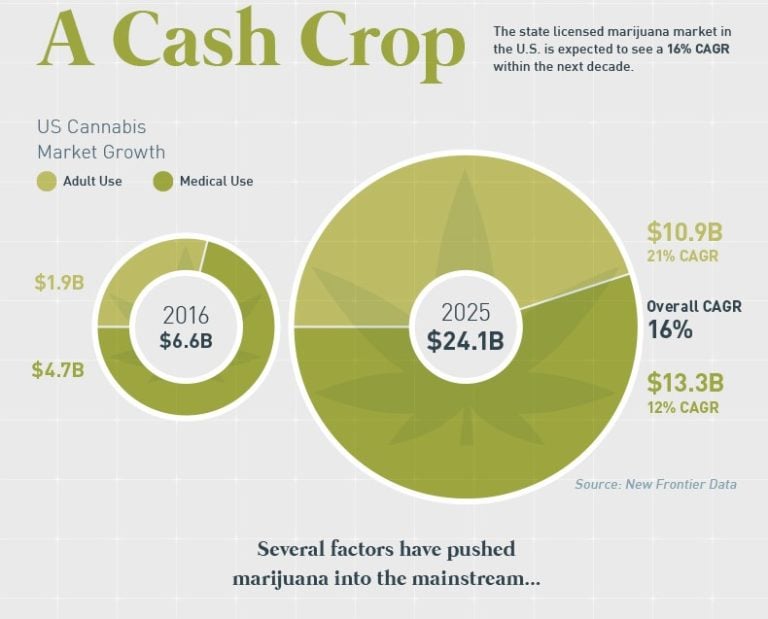 The legalization of cannabis for adult use – first passed in the states of Washington and Colorado in 2012 – is now approved in a total of nine states and the District of Columbia. By the end of the year, that total could be in the mid-teens as states vote on cannabis-related ballots in the upcoming mid-term elections.

States are legalizing the adult use of cannabis for various reasons, but there’s no doubt that one of the primary ones is the potential impact on both the economy and government coffers.

Experts say the current cannabis market (including unregulated sales) in California is already worth about $8.5 billion, making cannabis quite the cash crop to start with. In fact, it’s an amount that’s bigger than the current three largest agricultural markets in the state: milk and cream ($6.1B), grapes ($5.6B), and almonds ($5.2B).

With the passing of Proposition 64 in November 2016 and legalization officially taking effect January 1, 2018, the state of California is now the world’s largest regulated cannabis market.

To take advantage of this growing opportunity, entrepreneurs are rushing to the Golden State from far and wide.

Sizing Up the Green Rush

In 2016, the regulated market for cannabis, which only included medical marijuana at the time, was worth $2.81 billion in California.

However, Arcview Market Research predicts that California will see regulated sales grow at a 23.1% annual pace between 2016-2020 as adult use sales come into play. By 2020, the total regulated industry will be worth $6.5 billion.

Meanwhile, it’s expected that the state government will be pocketing from the rush as well, picking up $1 billion or more per year from taxes. That includes a 15% levy on all cannabis sales, as well as cultivation taxes applied to buds and trimmings.

As the largest legal market on the planet, California could see less expected green shoots, as well.

Because of its federal classification as a Schedule I substance, cannabis is extremely under-researched globally. With wider state acceptance of cannabis in California, it may be possible to foster an environment where more could be learned about the vast medical potential of the plant through the state’s powerful universities and institutions. This could lead to increased innovation, investment, and medical discoveries that could have an additional economic impact.

Such a track would follow in the footsteps of Israel, which is the world’s leader in marijuana research. In the country, there are 120 ongoing studies, $100 million in foreign and U.S. funds invested into patents, startups, and delivery devices, and ten-fold growth in investment expected between 2017-2019.