Over and over again I’ve been making goofy headlines about the Amigos, the 3 macro riders who will reach (or abort) their respective destinations, at which point the macro is subject to change. The latest update was yesterday with a daily chart view.

Just look at them, the SPX vs. Gold Amigo, the 10yr & 30yr Yield Amigo and the Yield Curve Amigo. So happy-go-lucky while they ride. But #2, the one in the middle, looks like he’s bracing for something.

So okay, I played swami and nailed the Payrolls and Average Hourly Earnings numbers on the head in this post from yesterday. We all get lucky here in the casino. Here is the post that the estimates came from the day before the Payrolls release.

Economy and Inflation: Paying it Straight

In truth it was not hard to project the solid payrolls with a cost-push ‘inflation effects’ hint to it. Because Amigo #2, the 2-headed one (10yr & 30yr yields) has had us on this track all along.

Of specific concern now is its 10yr head. Today I put my money where my mouth is and bought IEF, the iShares Treasury fund that best corresponds to the 10yr Treasury Note, which is more or less the inverse of this yield surge upward. Here is the daily view of the yield. Once we hit 2018, with all of 2017’s inflationary inputs, this thing just took off toward our target, which is in essence now in the books.

As noted in a subscriber update earlier today:

TNX has gotten awfully close to the long standing target of 2.9%. So close in fact that it has got me a bit on tenterhooks. I droned on and on about the 10yr to 2.9% and now it is just about here and I think the ‘inflation trade’ could be blowing off.

The play had been that the yields would rise to their ‘limiters’ (moving averages that have halted every damn rise in long-term yields for decades) and the risk ‘on’ markets would rise with them. Well today folks, the 10yr got to target (in essence) and the Dow dropped 665 points.

Here again are the 2 heads of Amigo #2, from the compelling long-term perspective. While it is possible a further rise can take place to the channel top, the yield hit 2.854% today vs. the EMA 140’s 2.872%. That’s pretty close, people. 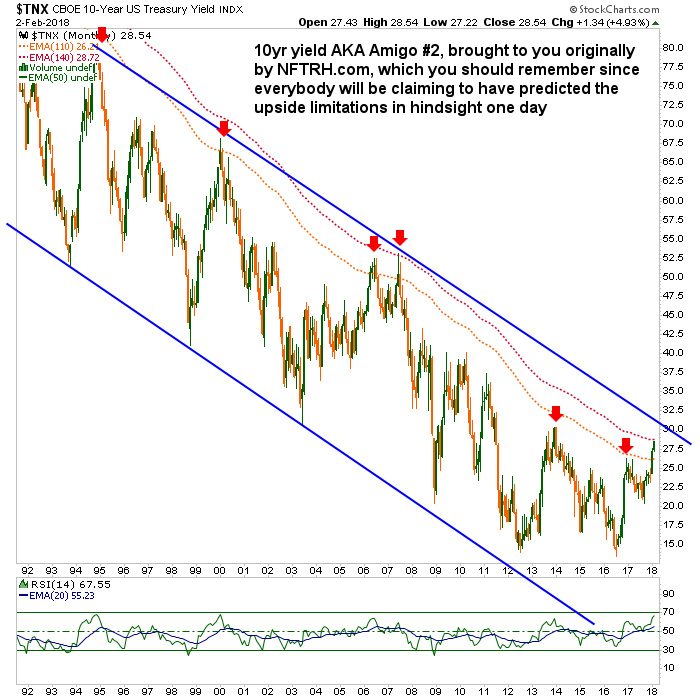 While on the long-term views, lets check the 30yr as well. The long bond has been back boned by the 100 month EMA limiter (red dashed line) for decades now. If things get really hysterical, I suppose that limit can be registered. But again, the Dow just shaved off 665 points and Treasury bonds are becoming more attractive vs. the S&P 500’s dividend yield… right at a time when EVERYBODY hates bonds… after all, Bill Gross and Ray Dalio told them to and who is the average person to argue with wealthy experts? Yes, my tongue is so far in my cheek it might pop right through.

In this post on January 25 we looked at our two bond experts as well as the likelihood of USD becoming the 4th Rider as the happy Amigos one day morph into something much more obviously foreboding.

USD/Euro to Be the 4th Horseman?

Why isn’t gold reacting the way it is supposed to? Because it has been caught up in the ‘inflation trade’, with all the seedy risk ‘on’ players that entails. Very simply, gold and the gold sector always were going to wait for a real risk ‘off’, counter cyclical phase before the real opportunity comes about. As we have noted since catching the December low in the precious metals, this rally was a seasonal and sentiment thing, and insofar as it rode with the risk ‘on’ and inflation trades (and with the happy Amigos), the sector was not quite ready for prime time.

The good news for gold bugs in waiting is that the inflationist bugs are getting exterminated and finally we may be able to manage a real opportunity amid disgust, loathing and genuine fear in the risk ‘on’ casino. The gold sector is after all, counter-cyclical in its best investment case.

Subscribe to NFTRH Premium for an in-depth weekly market report, interim updates and NFTRH+ chart and trade ideas; or the free eLetter for an introduction to our work. You can also keep up to date with plenty of actionable public content at NFTRH.com by using the email form on the right sidebar. Or follow via Twitter @BiiwiiNFTRH, StockTwits or RSS. Also check out the quality market writers at Biiwii.com.