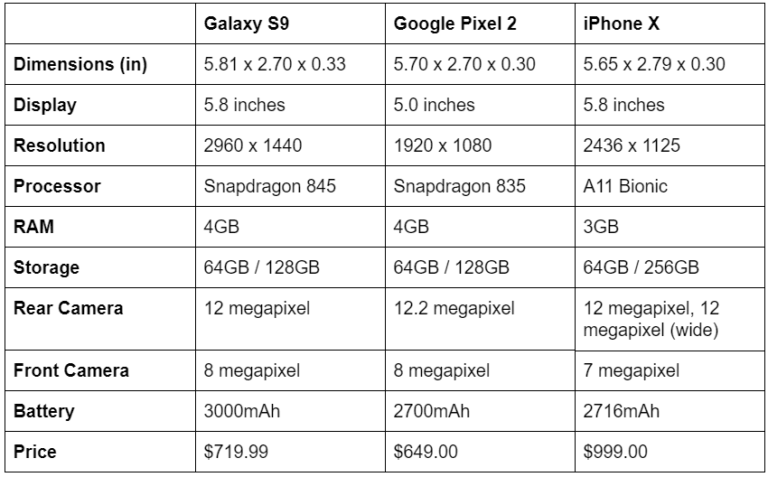 Samsung has released the first major flagship of 2018, but many are wondering how exactly the Galaxy S9 holds up in comparison to other high-end phones like the iPhone X and Google Pixel 2.

With the release of the Galaxy S9, Samsung led the charge into the new year with a significant power upgrade and a number of camera tweaks that are shaping up to make the Galaxy S9 the phone with the best camera on the market. However, once the specifications and features (or lack thereof) were revealed, many were disappointed to learn that the Galaxy S9 wouldn’t be a significant departure from what we saw with the S8. In truth, the Galaxy S9 is an upgrade in power, but is overall a safe step forward that doesn’t take any risks.

The iPhone X, on the other hand, is a huge change from what we saw with the iPhone 7 generation – and even with the other releases of the iPhone 8 and iPhone 8 Plus. With a radical new design that featured the controversial “notch” that divided the Apple community, we saw a new type of phone that did something different and managed to stand apart from other current phones. With Google reportedly releasing an update that will support this “Notch” functionality, it’s clear that the driving force behind Android is aware that this new sort of phone design has potential – or at least recognizing that other Android manufacturers will start to follow suit. What really set the iPhone X apart, however, was the innovative FaceID technology.

With the majority of phones getting more and more similar as the gap between high-end specifications becomes far more narrow, a lot of the phones are starting to look the same. Nearly every luxury flagship manufacturer has opted to shrink bezels and increase screen size, leading to a near-homogenous smartphone field that looks classy but also very samey. When companies like Apple offer something new in the form of FaceID, the market takes note. While the iPhone X fell just short of sales expectations, it became the fastest selling iPhone in history with huge

numbers of devices being sold over the holiday – despite the shocking $1000 price tag. It turns out that reinventing facial recognition technology in the form of a phone that can adapt to changes in your appearance – such as a new pair of glasses or facial hair – can pay off in a big way for a smartphone company.

Although Apple has an incredibly popular phone on their hands, that’s not to say that the Galaxy S9 and Google Pixel 2 don’t put up a fierce fight. The Google Pixel 2, while it continues to have some technical issues following its release, is an excellent phone as the sophomore effort from the company behind Android. With more RAM than the iPhone X and an identical amount to the just-released Galaxy S9, it is capable of some impressive performance that can keep up with – and even exceed – Apple’s best efforts. Combined with a simple and intuitive UI from the company responsible for the ongoing development of the world’s most popular operating system, it’s clear that the Google Pixel 2 has been a big win for Google.

While both the iPhone X and the Google PIxel 2 are premium phones with premium performance, it’s a little unfair to compare them side-by-side with the Galaxy S9 – the first of a new generation of high-end smartphones with the specifications to boot. Perhaps the biggest thing that the Galaxy S9 has g

oing for it is the new Qualcomm Snapdragon 845 processor. Samsung’s newest device doesn’t take any huge steps forward in terms of RAM, but the addition of a new generation of processor should give it the bump it needs to edge out the Google Pixel 2 and the iPhone X in terms of speed and capability.

Another way in which the Galaxy S9 comes out on top when compared to the Google Pixel 2 and iPhone X is in battery life. While all of the smartphones should last a full day on a single charge, Samsung leads the charge with a 3000 mAh battery which is a significant upgrade when compared to the 2700 of the Google Pixel 2 and the 2716 of the iPhone X. It may seem like a small increase numerically, but that little bit of extra capacity could make all the difference when you’re scrambling to find a charger.

With smartphones becoming more and more expensive with each generation, it’s also worth taking a look at how these phones are priced. With the iPhone X nearing a $1000 price tag, it’s clear that these smartphones are a major investment and it has made it a notable consideration for many smartphone buyers. Out of the three of these smartphones, the Pixel 2 is the cheapest of the bunch. As a phone that is technically “last-gen” at this point, the price of around $650 is a stark contrast to the price of competitors like the iPhone X and the $720 Samsung

At the end of the day, all three phones are capable devices that will suit the needs of almost every user. It’s honestly a matter of personal preference. How much can you afford to spend? Do you prefer Apple or Android? Which features are most important when buying a new flagship? Take a look at some more detailed specifications below in order to get a better sense of how these phones stack up when compared to one another.