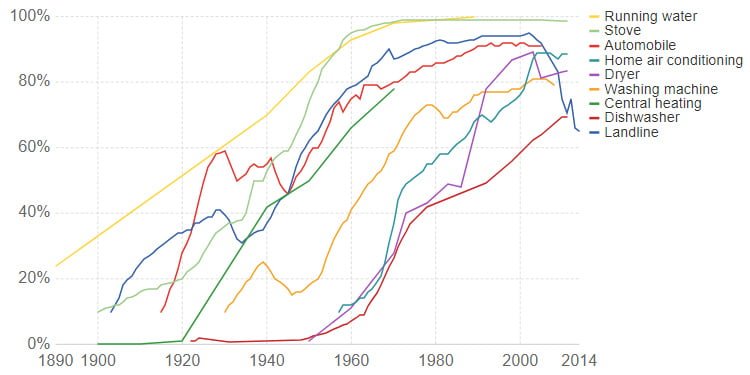 Technological progress is not the only thing rising at an exponential rate.

The rate at which newly commercialized technologies get adopted by consumers is also getting faster, too.

In the modern world, through increased connectivity, instant communication, and established infrastructure systems, new ideas and products can spread at speeds never seen before – and this enables a new product to get in the hands of consumers in the blink of an eye.

Today’s dynamic chart comes to us from Our World in Data, and it allows you to compare the adoption rates of new technologies over the period of more than a century.

In addition to the technologies you’ll find embedded on the initial chart above, you can also use the “Add technology” tab of the chart (bottom left) to list up to 40 tech data series on the chart in total. This allows you to gauge adoption rates for everything from color televisions to washing machines, while giving you an idea of the trajectory of many common technologies today.

A Blast From the Past

To get the full impact of the chart, it’s worth removing more modern technologies like smartphones, social media, tablets, cellular phones, and the internet from the list.

Here’s a look at adoption rates for the household appliances and products today that we would consider pretty essential, over a period of more than 120 years:

The telephone was invented in 1876, but it wasn’t until a century later that landlines reached a saturation point in households.

For this to happen, massive amounts of infrastructure had to be built and network effects also needed to accumulate to make the product worthwhile for consumers. Further, the telephone suffered from the “last-mile problem”, in which the logistics get tougher and more expensive as end-users get hooked up to a network.

Now, here’s a chart with many older technologies removed – keep in mind that the x axis has changed to a much shorter timespan (~65 years):

Microwaves, cell phones, smartphones, social media, tablets, and other inventions from the modern era all show fast-rising adoption rates. Standing out most on the chart is the tablet computer, which went from nearly 0% to 50% adoption in five years or so.

Why do newer technologies get adopted so quickly? It seems partly because modern tech needs less infrastructure in contrast with the water pipes, cable lines, electricity grids, and telephone wires that had to be installed throughout the 20th century.

However, it also says something else about today’s consumers – which is that they are connected, fast-acting, and not afraid to adopt the new technologies that can quickly impact their lives for the better.