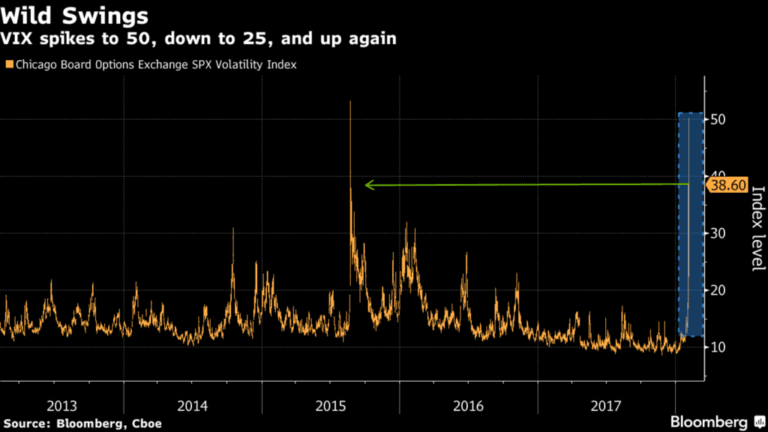 We may not be able to predict the markets, but one thing we can always see coming: a lot of hype whenever markets experience big moves! This week’s anxious response is particularly unsurprising after the unprecedented period of calm that the markets have enjoyed.

And, perhaps, that’s the real story: what we might be witnessing is the end of low volatility.

Yet, despite all of the hand-wringing, we found some instructive insights in yesterday’s headlines. If nothing else, we thought it might be a useful perspective to “document” the hysteria, so we have something to look back on as a reminder during future periods of calm. So here’s a quick recap of yesterday’s chaos.

The Big One. Is this the beginning of the big volatility unwind? Bloomberg estimates that Volatility-Targeting Funds Could Sell $225 Billion of Stocks. Major indices are off 5% – 10% from all-time highs, and the CBOE Volatility Index (VIX) has moved to almost 50 in just two days from single-digit lows. 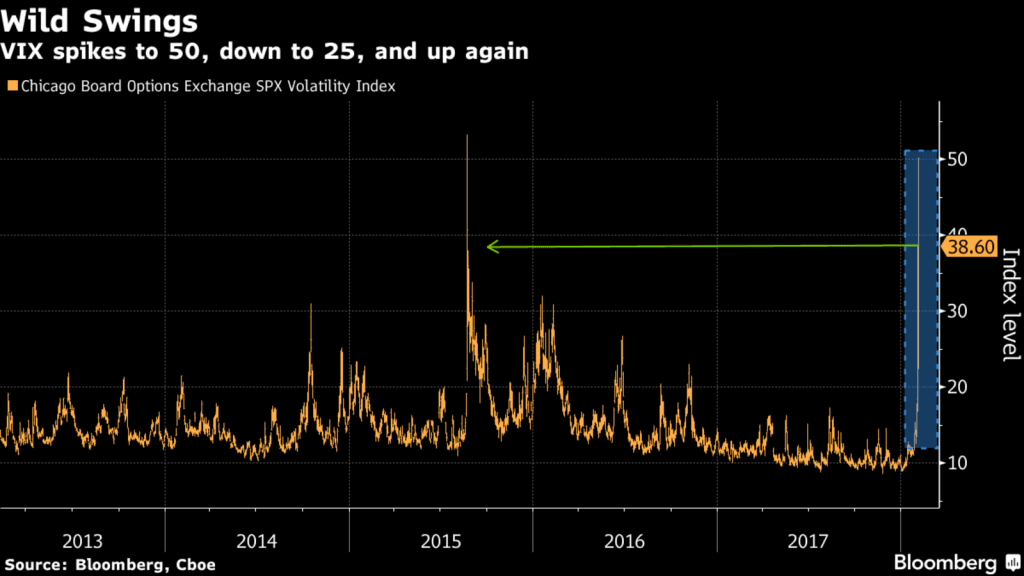 Quant-Blame Game and ‘Crack Analysis’ Behind the Flash Crash. Whenever there’s a sudden crash seemingly devoid of rhyme or reason, the first culprits in the firing line tend to be the “algos.” As to more plausible explanations: short volatility exchange-traded products could have kicked up the VIX and set off a contagion of selling. Two popular securities, known by their tickers XIV and SVXY, fell about 95% over a single day, with their combined value plunging to $150 million from $3 billion. They were short about 200,000 VIX futures and likely began covering that risk into the market close, serving as the catalyst for the broader market selloff. The spike in the VIX then could have set off volatility-targeting funds, which readjust their holdings to maintain a subdued level of market swings.

Quants? Bubble on the Brink? The Fed? It’s 1998 All Over Again. Does the chaos embroiling equity markets have an obvious precedent that can guide investors on how it plays out? While the Crash of ’87 and 2008 financial crisis have been name checked, a more relevant example may be 1998, the first test of the internet bubble. It was a period in the market that has some eerie parallels to today. Stocks were in the eighth year of a giant bull run that had relentlessly expanded valuations. The Federal Reserve had just begun a tightening cycle. And behind the scenes, sophisticated speculators were getting into trouble. While drama played out rapidly, its depth may be a lesson for investors wondering how bad things can get in such an environment. The S&P 500 Index violently plunged 19% in a matter of weeks, from a high on July 17, 1998, through the last day of August. Yet, the decline was all but forgotten two months later.

Hedge Funds Shorting Volatility ‘Forced to Puke’ as Stocks Drop. Funds plunged on Monday as market trends suddenly reversed. A hedge fund that trades equity options lost as much as 65% after it was forced to sell holdings overnight. Traders who were short volatility just had to puke. “The market became completely illiquid as volatility increased far in excess of the market movement. We were forced to liquidate throughout the night and morning.”

Credit Suisse Fund Liquidated, ETFs Halted as Short-Vol Bets Die. The fund’s market value topped $2 billion in late January; it was down 89% as of 1:41 p.m. Tuesday after being halted for most of the morning. The fallout from the implosion of a vast array of arcane bets against stock-market volatility mounted quickly Tuesday as Credit Suisse Group AG moved to liquidate one investment product and more than a dozen others were halted after their values sunk toward zero. For the flood of investors — including novice retail types — who had piled into what has come to be known simply as the short-vol trade, it was a devastating blow after they had successfully squeezed profits out of the eerie calm that had overtaken stock markets in recent years. The end to that tranquility came fast, and the VIX soared as much as three-fold in just three days as $3 trillion was wiped from equities amid signs the U.S. economy could be overheating.

An Inventor of the VIX: ‘I Don’t Know Why These Products Exist’. Everybody knew that this was a huge problem. Everybody knows that Inverse VIX is going to go to zero at some point, and all these inverse and leveraged products — not just in the VIX but elsewhere too — at the end of the day will cost people a lot of money… And what’s going to happen as a result of this? Nothing, other than in a few months’ time someone’s going to come up with a new XIV, and everyone’s going to start putting money into that. That’s OK, that’s how the world goes. In my wildest imagination I don’t know why these products exist. Who do they benefit? No one, except if someone wants to gamble -– then, OK, just go gamble… And who exactly made money? Since its inception in 2009, the VXX is down some 99%, even after this move… It’s kind of sad that these products exist in the first place, but it’s hard to stop it. If you stop this, something else will come up. Bitcoin will come up.

Wave of Crypto Scams, Bitcoin’s Crash Spooks Card Issuers. Bitcoin dipped below $6,000 by Tuesday after authorities continued to speak out against speculation. America’s largest banks had myriad worries in mind this week when they rushed to ban customers from using credit cards to buy cryptocurrencies. Bitcoin’s gut-wrenching slide was just one of the threats. And another big lender, Lloyds Banking Group Plc, has said that it, too, was halting credit-card purchases, further constraining the inflow of investor money. “You’ve got people that are eschewing their mortgage to buy Bitcoin to get rich quick,” said Kristina Yee, an Aite Group analyst who studies cryptocurrencies and blockchain. The banks are “worried that people are over leveraging themselves and they won’t be able to pay back the debt.”

Carl Icahn Says Market Turn Is ‘Rumbling’ of Earthquake Ahead. “This is just a little rumbling, a little fault line,” Icahn told CNBC in an interview Tuesday. “Before the earthquake, you get the rumblings, and then maybe you don’t have an earthquake for 20 years, or 10 years, or five years. But these are the rumblings.” He went on to warn: “When you start using the market as a casino, that’s a huge mistake.”

Fear Gauges Beyond VIX Show Traders Don’t Think It’s That Bad. It ain’t that bad. That’s what gauges of fear and contagion outside of the equity market are telling investors. Even though the CBOE Volatility Index reached its highest point in more than two years on Tuesday, other benchmarks that track trader expectations of turmoil, from Treasuries to emerging markets, haven’t seen nearly as much angst. We shall see . . .