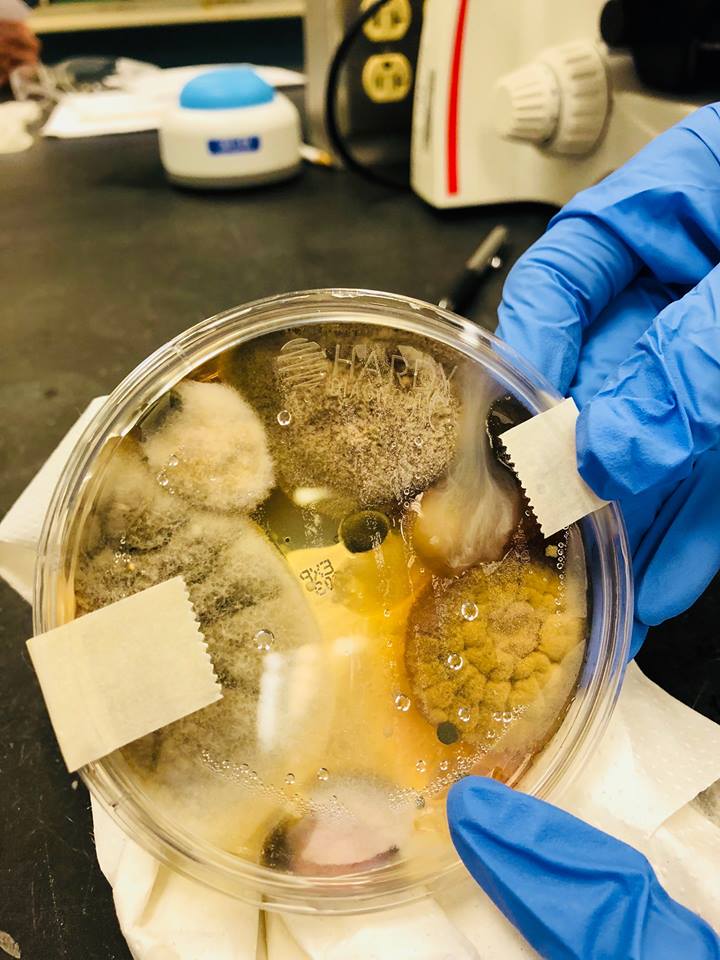 While using hand dryers has long been thought to be more environmentally friendly and hygienic than touching a dirty towel dispenser, a recent Facebook post suggests that these dryers may be incredibly germy.

While using hand dryers is largely less efficient at drying than using a traditional paper towel in public restrooms, many people opt to use the devices in order to save on waste. Traditional hand dryers aren’t great at cleaning, but the new models from Dyson are making appearances in more and more restrooms around the country and they’re starting to offer a viable alternative to paper towels – at least in terms of getting your hands dry. However, a recent post from Nichole Ward on Facebook may make you think twice about using hand dryers.

Nichole posted that she had stuck a Petri dish inside of a Dyson Airblade and proceeded to incubate it for 48 hours. In that short amount of time in warm conditions, a huge amount of nasty bacteria and fungi managed to grow.

“I stuck the open plate in an enclosed hand dryer of a public bathroom for a total of three minutes,” Nichole wrote. “Yes, three only. DO NOT EVER dry your hands in those things again. This is the several strains of pathogenic fungi and bacteria that you’re swirling around your hands, and you think you’re walking out with clean hands. You’re welcome.”

As of the time of this article, the Facebook post has already been shared almost 550000 times, so many people are starting to be more aware of the large number of germs that could potentially be transferred while using hand dryers. Comments on the Facebook post are almost universally disgusted, with many people stating things like “never using these again!”

In the interest of full disclosure, however, there’s not much that is known about the scientific credentials of Ward, so there’s a possibility that using hand dryers isn’t quite as disgusting as she suggested. Issues with collecting the sample into the petri dish or contamination afterwards could very well have affected the concerning results. One petri dish from one hand dryer likely isn’t enough to write off using hand dryers forever, but it’s an interesting thought to consider when it comes time to dry your hands.

Although the number of bacteria and fungi found in the petri dish was certainly shocking, it’s been known for quite some time that the dirtiest parts of the home may actually be quite different than you’d think. Numerous reports from around the web suggest that the kitchen sink is actually dirtier than the average toilet, due to bacteria and other growths growing on surfaces such as rarely-cleaned sponges. Thus, it’s not necessarily a huge stretch that one of the dirtiest parts of the bathroom is the place where people dry your hands. While you’d think that the area might be clean as people are using it after washing their hands, the cleanliness and effectiveness of people vary, so it’s certainly possible that there’d still be bacteria to be transferred after the average person washes their hands after using the restroom.

Ultimately, however, it’s up to you whether you’d like to trust the results of Ward’s petri dish or the research and design of a large company like Dyson. While the company doesn’t necessarily claim to have a cleaner device, Dyson prides themselves on their superior engineering – and the Airblade is certainly one of the best options when it comes to using hand dryers. While a traditional hand dryer is ineffective and leads to most people simply wiping their damp hands on their pants, the Airblade does a decent job of cleaning off water droplets using a strong stream of concentrated air that literally wipes off moisture like you’d see with a paper towel. If the amount of bacteria present in Ward’s dish is actually present in the air dryer, however, it may make far more sense to just use a paper towel.

Keeping the bacteria and fungi growth in mind, the results of this experiment didn’t take a look at paper towel dispensers for a comparison. Public restrooms, in general, are usually pretty dirty in terms of bacteria due to the large amount of people using them. There’s a real possibility that the Dyson Airblade, while possibly harboring some dangerous bacteria and fungi, is actually a cleaner alternative to the average paper towel dispenser.

If there’s one main takeaway from this Facebook post, it’s likely the reminder that restrooms aren’t nearly as clean as you’d think. While it’s next to impossible to avoid germs entirely, practicing regular hygiene habits like relatively frequent hand washing and avoiding touching surfaces as much as possible may help keep you safe from the bacteria that may come along by using hand dryers.