ValueWalk
Home Economics From Dalio To Dow To Thucydides

Dalio’s been doing a lot of blogging lately, which is nice. He’s a pretty smart dude. His latest write-up is on the short-term debt cycle — something we’ve written about quite a bit– and where he thinks we are currently, why, and what that means for markets.

Here’s a snippet. You can find the entire article here.

In the “late-cycle” phase of the short-term debt/business cycle, when a) an economy’s demand is increasing at a rate that is faster than the capacity for it to produce is increasing and b) the capacity to produce is near its limits, prices of those items that are constrained (like workers and constrained capital goods) go up. At that time, profits also rise for those who own the capacities to produce those items that are in short supply. Then the acceleration of demand into capacity constraints and rise in prices and profits causes interest rates to rise and central banks to tighten monetary policy, which causes stock and other asset prices to fall because all assets are priced as the present value of their future cash flows and interest rates are the discount rate used to calculate present values. That is why it is not unusual to see strong economies accompanied by falling stock and other asset prices, which is curious to people who wonder why stocks go down when the economy is strong and don’t understand how this dynamic works.

Dalio and his team at Bridgewater see significant recession risk 18-24 months out. The cycle models we use at MO suggest the same. Historically, it’s taken an increase of 3+% in the Fed rate to turn the cycle over. And currently we’re only at 1.5% and not expected to hit a rise of 3% or greater until 2020.

There’s a number of variables that could speed this up or slow it down, like a jump in inflation or increasing concerns at the Fed over financial stability (ie, speculative bubbles). But honestly, I think the odds are that if anything, the rate path is slower and lower than what’s being priced in. Loads of debt and scarred psyches from the GFC are likely to keep things in the Goldilocks zone of mediocre growth and only slightly higher inflation.

Though a large fiscal spending increase, like infrastructure could change this. Like Dalio says “there is a whole lot of hitting the gas into capacity constraints that will lead to nominal rate rises driven by the markets. The Fed’s reactions to them and the amount of real (inflation-adjusted) rate rises that will result will be very important, so we will be monitoring this closely.”

I finally got around to listening to the Mark Dow interview on the Futures Radio Show with host Anthony Crudele, after being told by more than a few people how excellent it was. They weren’t kidding. Dow is one of my favorite twitter follows and he puts on a macro master class in this interview. Go and listen to it now, here’s the link.

Mark’s great at cutting through the noise and getting at the actual drivers of market action. As an example, check out this blog post of his from 2015 summing up his simple key macro views at the time (which proved to be correct).

A big lesson that I’ve learned from following him over the years, and something I’m still very much working on, is to not overcomplicate things. Get at what matters and don’t lose yourself in the details. I’ve noticed that if it takes me a bunch of pages and 10+ charts to pitch a macro thesis, then I need to stop and think harder. Because I’m probably using fluff to hide the fact that I don’t really have conviction in what I’m saying — I’m chewing on fat and haven’t yet gotten to the meat.

Also, this one isn’t market related but it’s really good. Listen to Tim Ferriss’ interview with Terry Crews. Terry is a former football player turned actor. You’d recognize him from The Chappelle Show and Brooklyn Nine-Nine. The guy is also apparently an extremely talented painter and furniture designer.

He’s got an inspiring life story and drops some real wisdom in this one. It’s starts off a tad slow but then gets going after the first 15-20mins or so. It’s one of the best interviews I’ve listened to in a long time. Here’s the link.

This week I’ve been reading This Will Make You Smarter edited by John Brockman. Brockman of Edge.org (a site that I somehow just discovered and am now spending way too much time on) pitches the question “What scientific concept would improve everybody’s cognitive toolkit?” to a number of leading thinkers. Their responses, written in essay form, make up this book.

I’m three-quarters of the way through the book and have found it to be a great and sometimes enlightening read. It’s nearly impossible to create something dull when you have the likes of Pinker, Dawkins, Kahneman, and Ridley (to name only a few) filling your pages. Essays range from cognitive psychology to technology to economics to complexity theory to systemic risks… There’s something for everybody and many of the essays are short (2-3 pages) so it’s a great book for just periodically picking up throughout the day and maybe learning something new.

Visual Capitalist put out a post this week with the following two charts showing the speed of adoption for various technologies over time. You can clearly see in both charts how adoption of new technologies follow the S-curve.

But what’s interesting is the speed at which the adoption S-curve now reaches its maturation stage. In the first chart, showing older technologies, the x-axis spans 120 years. In the second chart, it’s half that and the time it takes new tech to reach full adoption is still much shorter. The world is speeding up and this trend isn’t likely to slow down anytime soon. Here’s the link to the full post. 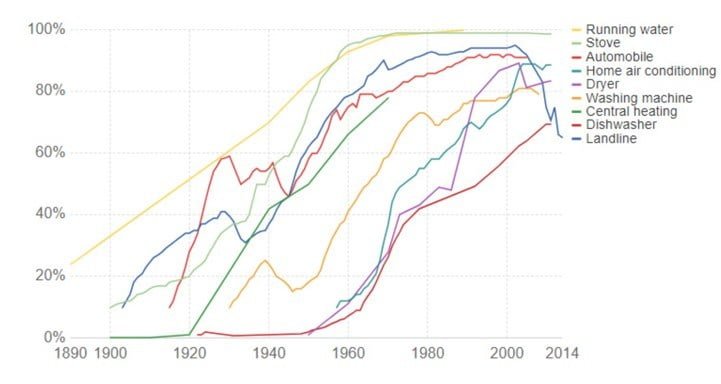 This is a chart of chip maker, Micron Technologies (MU) on a weekly basis. Technically it’s forming a nice bull flag which it looks ready to break out of any day now.

The bull case for this stock is simple. MU is likely to earn $9-10 in 2018. At its current stock price of $43, that gives it a price to earnings of roughly 5. That’s cheap for a company with a strong balance sheet that’s been growing revenues at a healthy clip, both organically and through acquisitions.

The bear case is concerns over too much capacity coming online and crushing the semi cycle. We are seeing record levels of Fab spending, which typically isn’t bullish (more capacity leads to more supply and lower margins/earnings).

I’m no semiconductor expert but I talk to people who are and they think we should see new fab spending fall going forward due to the increased costs and limited ROI of new capacity. If that’s the case, and were only in the mid part of this capital cycle, then MU strikes me as a fairly asymmetric proposition. It should trade above $60 on a conservative multiple rerating alone. It’s also a plus that David Tepper is a big holder of the stock.

If you have any thoughts or comments on MU or where we are in the semi cycle please share, especially if you think this is a bad take.

Those who make wise decisions are more formidable to their enemies than those who rush madly into strong action. ~ Thucydides

Thucydides words ring as true for traders in markets as they did for his commanders in the Peloponnesian war. We always want to be methodical in our actions in markets. Always planning and acting, not reacting or responding hastily. Opportunities are endless and so must be our patience. Our instinctual knee-jerk responses are almost always wrong. Move slowly and make wise decisions.