ValueWalk
Home Info-Graphs Cyclicals Vs Defensives – The Next Shoe To Drop? 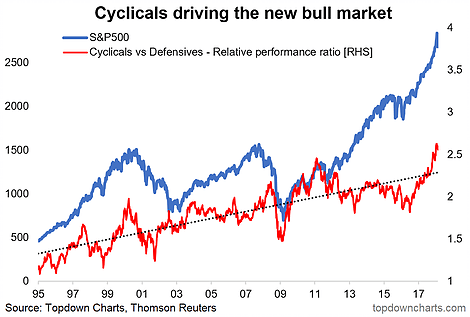 The February stockmarket correction has investors scrambling to find the reason behind the rapid fall in the major indexes, with various rationale being suggested.  Truth is sometimes you get technical-driven corrections without a “reason”.  But the other thing it does is increases scrutiny of existing known facts, such as the extreme relative performance of cyclicals vs defensives.

The chart in question comes from the new enhanced weekly S&P500 #ChartStorm over on Premo Social.

The chart shows the extreme relative performance of cyclicals vs defensives, with a key conclusion being that cyclicals were a key driver of the new bull market.

For clarity, the cyclical sectors are Technology, Materials, and Industrials, and the defensive sectors are Utilities, Telecoms, and Healthcare. In the chart I have plotted a linear trend line as the cyclicals vs defensives relative performance line (in red) is clearly trend-reverting rather than mean-reverting.  This helps put the extremes reached in this indicator into context.

Now back to that comment about cyclicals relative performance being a key driver of the new bull market.  The issue with that is that you look back across time in the chart and you can see that most of the time when cyclicals relative performance reached an extreme it ended up reverting back to trend (the same is true on the downside – a useful piece of information in 2016).

When cyclicals relative performance reached an extreme and rolled over in the past, most of the time this coincided with a significant market top (a major correction or bear market). There are a couple of exceptions, but it’s certainly something to consider in the context of the current market backdrop.

This article originally appeared as a submission at See It Market