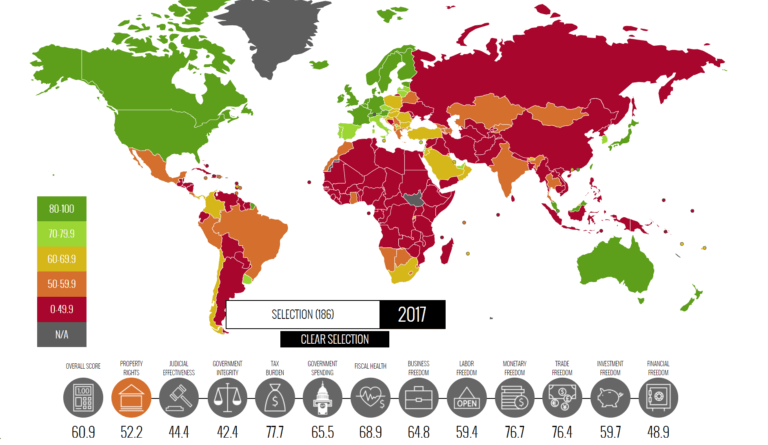 Bitcoin is slow, expensive, complicated and volatile. So what makes it valuable?

Imagine clambering onto your roof each year to install a new set of solar panels … by bolting them to the ones you installed the year before.

Something like the stack on the right hand side

Take a close look at this moss. This is basically what it’s doing. Why does it waste precious resources growing so tall? Completely surrounded by other moss, it collects no sunlight at all from the sides. In fact, you can see that it only has chlorophyll in a few topmost wisps (the green shoots).

The roots and the sunlight-capturing tip account for, perhaps, 25% of the biomass produced and maintained by this moss plant.

This seems irrational because it is. Moss has yet to evolve the concept of property rights. The excess energy and minerals collected by the moss, beyond what is spent on metabolic, immune, and reproductive functions, is plowed into growing taller and taller.

Z axis growth is not a productive use of energy for the moss — again it only collects sunlight with the few wisps of green flesh not obscured by its tightly-packed neighbors. The moss community as a whole, however, collects no more energy from the sun than it would if it were only a millimeter tall. Each individual moss-plant’s investment in growth is a necessary security measure, evolved to prevent the neighboring moss from blocking the sun with its own growth.

This kind of security expenditure (pouring the majority of excess resources into defending access to a patch of sun) is common among plants that aren’t resource-limited by water, weather, or soil (like those growing in deserts, on precipitous cliff-sides, and so on). Rain-forest trees are a great example:

These trees grow to a majestic 40 meters tall; if their access to sunlight were protected by property rights, several feet would have sufficed.

The evolutionary stable strategy for moss is actually incredibly inefficient [see my tea table article for more on ESS].

Given property rights and rule of law, moss plants would be free to invest their excess energy into increasing their productivity rather than security. Imagine extending that over a billion years of evolution, and we might already see the moss drilling and operating oil wells.

What can this moss teach us about Bitcoin?

Just as the moss plant would qualitatively benefit from a more efficient method of securing its place under the sun, human productivity and well-being is greatly improved by stronger property rights.

The productivity of an economy that does not have strong property rights will be low. Much energy, thought, and time will necessarily be spent in an anxious effort to secure what little production one can manage. Many innovations and business models will be unfeasible because they will be destroyed (or, more often, deterred) by one or another form of theft. Even a marginal improvement in access to property rights should drive the economic equilibria of many places in the direction of wealth creation.

Because it is decentralized, significantly easier to transport, store or hide and — this is crucial to augmenting property rights — significantly more difficult to seize than any tradition asset, Bitcoin delivers a real improvement in property rights at a comparatively modest cost (risk due to price volatility + transaction fees).

Beyond its black market applications, Bitcoin has utility and value because most of the world’s population lives in countries that do not uphold property rights. 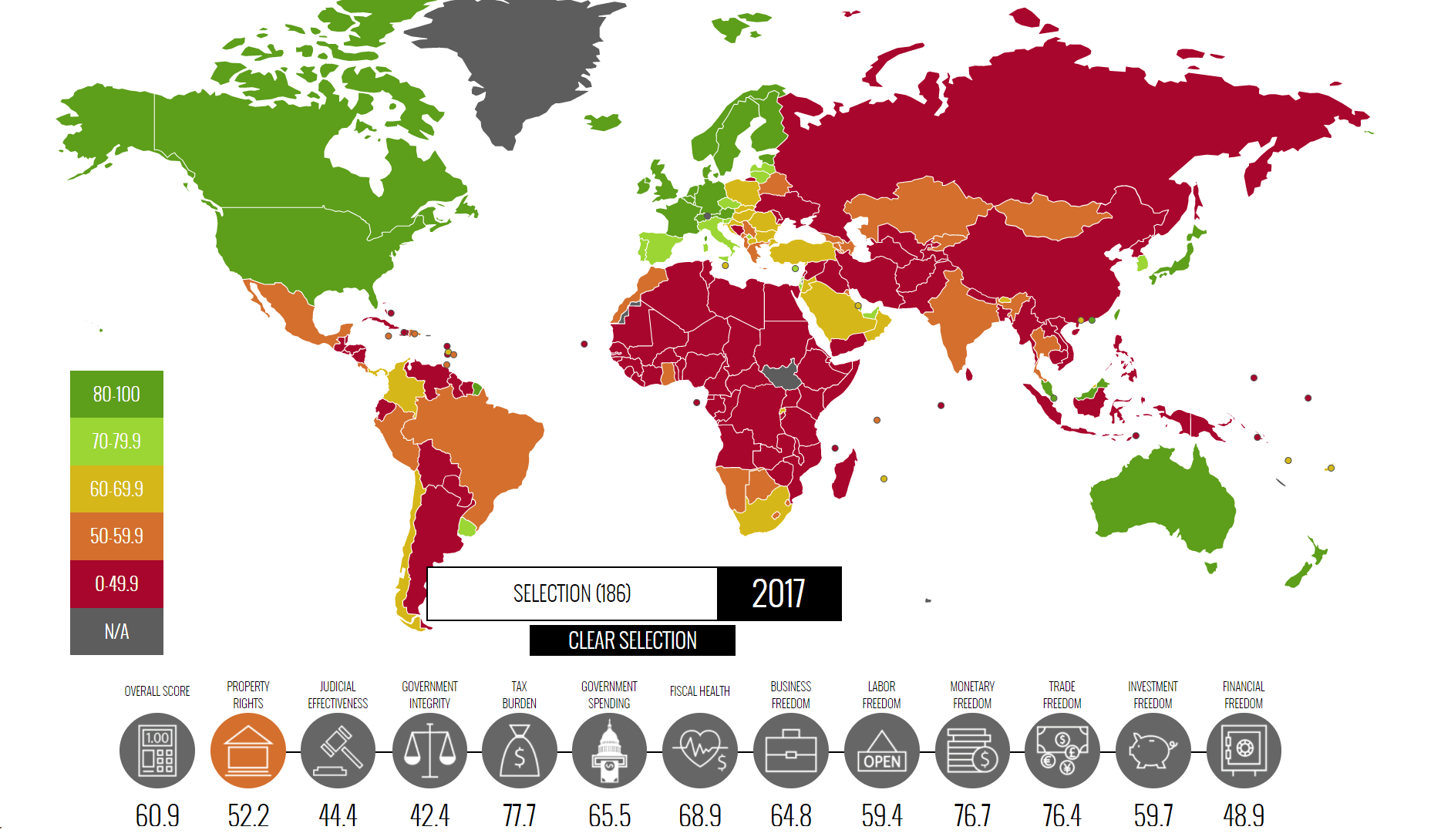 The average human on planet Earth lives in serious uncertainty about whether his property will be his tomorrow. (This interactive map is from Index of Economic Freedom published by Heritage Foundation, click here to play with it)

*It is important not to underestimate this. Uncertainty discourages people from working hard and taking risks. First world countries owe a significant part of their productivity and wealth to rule of law and property rights. Any shift in that direction should also increase the amount of economic activity in a country that is normally a dangerous place to be successful.

**Having done business in China and India, I speak from personal experience when I say that nearly every business person, and any typical middle-class citizen in these countries is guilty of regularly, or at least occasionally, breaking tax laws, bribery, etc., to get by.

This is not just a third world phenomenon…At one point in my food cart manufacturing days, we worked with two Egyptian food cart partners in New York (they jointly ran several dozen food carts in Manhattan) who — in a bid to report as little income as possible to the IRS, a universal practice among small cash businesses in the city — stored tens of thousands of dollars inside a wall, only to find part of the money eaten by rats several months later (they, of course, only realized what had happened after hotly accusing each other of theft).

Giving people a way out:

It is difficult for people living in peaceful western democracies, and occasionally grumbling about taxes, to understand how front and center property rights issues can be.

Bitcoin provides a last resort for individuals and communities contending with hyper-inflation, capital controls, corrupt courts, extortion, and expropriation of all kinds.

Dollars or 1000 euros in cash. The daily cash withdrawl limit from banks is also set at 1000 U.news.xinhuanet.com2

Or take a stroll to the ATM to try and withdraw your hard earned savings in an attempt to spend them before the currency loses 80% of its value.

BANKERS have called on government to slash withdrawal limits further to a weekly maximum of $500, while reducing…www.newsday.co.zw

Harare, Zimbabwe Interest in bitcoin trade is soaring in Zimbabwe and so is the price of the crypto-currency, which hit…qz.com

The Bitcoin network, despite its many imperfections, is proving itself as, at least, a moderate improvement in access to property rights and financial freedom for much of humanity.

Property rights issues cast a shadow that spans the entire income spectrum — whether you are a middle class entrepreneur in Zimbabwe who is not legally allowed to leave Zimbabwe with more than $1000 in cash, as the political and economic situation descends into uncertainty, or the world famous investor Prince Alwaleed.

With some of Saudi Arabia’s richest men having been arrested for alleged corruption, the government may now seize their…fortune.com

Ironically, shortly before being detained indefinitely and very likely expropriated by the despotic Saudi “government,” Prince Alwaleed called Bitcoin an “Enron in the making.”

Prince Alwaleed says bitcoin will implode: ‘Enron in the making’

Although it’s very possible that Bitcoin’s price has run far ahead of its underlying value — and certainly many of the people bidding it up (including myself on occasion) are speculators, not users — the Prince’s bubble ended up bursting first.

While people like Prince Alwaleed obviously have access to more traditional methods of evading capital controls and expropriation (offshore banking [valued at well over $15 trillion], shell companies, and so on), it is clear that Bitcoin — and perhaps the even-less traceable cryptocurrencies like Monero, Dash, and Zcash — is at minimum a useful new gadget in the offshore banking arsenal.

Bitcoin is even more useful for criminals (who in all likelihood made up the first critical mass of its users). But they are a rather small market, compared to the enormous potential market of law-abiding and semi-law abiding citizens hedging against expropriation, unreasonably high taxes, unfair lawsuits in corrupt courts, capital controls, and so on.

Obviously, Bitcoin is not a silver bullet — the classic $5 wrench XKCD meme says it all:

Governments, fair or corrupt, still have plenty of very effective ways of detecting income, collecting taxes, expropriating property, and carrying on all manner of other financial/economic despotism. One cannot live on Bitcoin alone. The government can still take your house, your car, your land, and so on. However, decentralized cryptocurrencies do have the potential to shift the equilibrium noticeably in favor of the individual.

My own parents were forced to give up all of their possessions when they left the USSR. In fact, they had to pay a fee in order to leave. Had crypto existed in the 80s, they would have surely sold their Moscow apartment and other assets for whatever they could get in Bitcoin. In the event, I think they managed to smuggle several thousand dollars worth of gold sewed into the lining of a fur coat.

[Side note: It was popular among people emigrating from the USSR to have gold dental work installed in a bid to carry out at least something of value].

Communist countries are a perfect storm for crypto-currency — subsidized electricity and zero property rights. Venezuela is the best example:

Hyperinflation has driven thousands to seek out unorthodox currency. Under these circumstances, a miner starts to look…www.theatlantic.com

However, even China, which is hardly Communist, only allows private citizens to take $50,000/year out of the country. Unsurprisingly, there is a general, and well-founded, anxiety among wealthy Chinese that the government will take away what they have earned…Chinese money has been a huge driver of Bitcoin’s price.

China’s bitcoin exchanges are closed to local customers, and a “comprehensive ban” is reportedly in the works. In the…qz.com

When reckoning the long term (years, not months) market cap potential of Bitcoin and other competing cryptos, it is important to consider not just its black market use cases or its competition with gold (gold has ~$7 market cap) and offshore banking ($15–30T market cap), but also the new value it may create if it proves, in the long term, to be a better mouse trap for individuals in their struggles with corrupt and ineffective governments/social structures everywhere.

Not only does Bitcoin create value by providing a new, albeit imperfect, way to secure existing wealth, it will likely encourage the creation of new wealth by individuals living under otherwise discouraging political regimes. Even governments may trend towards better behavior as they find themselves forced to contend with Bitcoin. I can’t make any price predictions — there is still no certainty that cryptocurrencies will stand the test of time and scale — but the next decade of the crypto-currency industry’s growth should be interesting to watch.

Disclosure: I have been holding BTC and some other cryptos on and off since some time after India withdrew large cash notes from circulation — which got me thinking along the lines above.