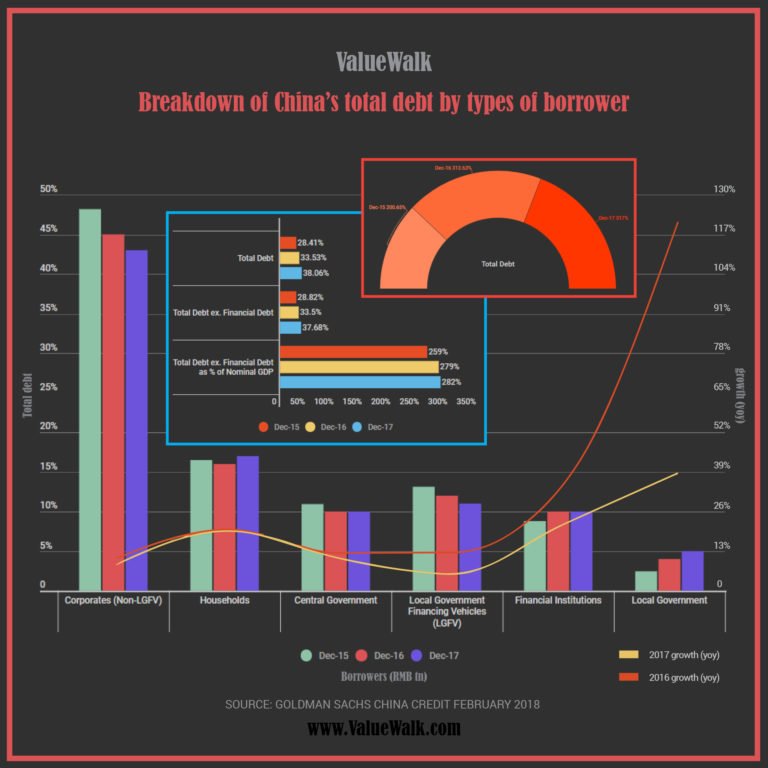 China has spent years studying the US free enterprise system and in some cases has mimicked what works by at times adding or subtracting key components. For instance, the “free” in “free enterprise” more often than not has taken on a different meaning. Business executives and investors are now free to profit from the communist regime but are not free to express their thoughts on political topics. Another area where China appears to be mimicking the US is in its shadow banking sector.  But here, too, China seems to be going one step further, making shadow banking even more complicated than the US. A recent Bank of International Settlements (BIS) report that shows a diagram of the increasingly undecipherable complexity. 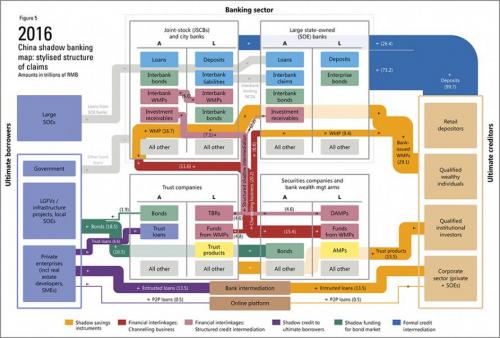 There appears to be one message from US financial history that the Chinese do not seem to have learned or at least one that they do not much like to acknowledge. In 2008, highly obfuscated economic structures, namely in the form of non-transparent and incredibly complicated over the counter derivatives products, caused significant problems when the market started to crash.

China appears to have taken this concept and put it on steroids.

Take, for example, debt to equity SWAPs was, as a recent Moody’s research piece pointed out; it was unclear who was financially responsible if the over-leveraged companies issuing the SWAPs defaulted.

Many of the nation’s state-owned enterprises, or SOEs, have become highly leveraged beyond what can be supported, analysts say. The country has been shifting burdens by delevering, but the problem is that the debt doesn’t just magically disappear.

In part, this can be seen in the recent BIS report.

“New and more complex ‘structured’ shadow credit intermediation has emerged and quickly reached a large scale,” the report noted, with the complexity packaged and sold through wealth management products.

The BIS literature dove deep into the complex and nuanced world of shadow banking to find linkages between a significant share of bond issuance that is funded by shadow savings instruments. Some of the wealth management products packaged and sold to investors, as much as 7.5%, come with a return guarantee, with 12.9% are principal protected and come with a free return.

While individual investors are the primary purchaser of these wealth management products, their share of the market has been dropping from near 60% in 2014 to currently around 40%, with interbank investments delivering the balance of the demand.

China has been gently deleveraging, but so much of it appears to be moving the deck chairs on the ship but not addressing the root of the problem:

Following the GFC, and especially during the period of strong stimulus policies in China implemented during 2009-2010, shadow banking has played an important role in channeling funds to the underserved and potentially riskier sectors of the real economy. But direct shadow credit to ultimate borrowers has slowed considerably in recent years, whereas the volume of shadow funding as well as structured shadow credit intermediation has grown at a fast pace. 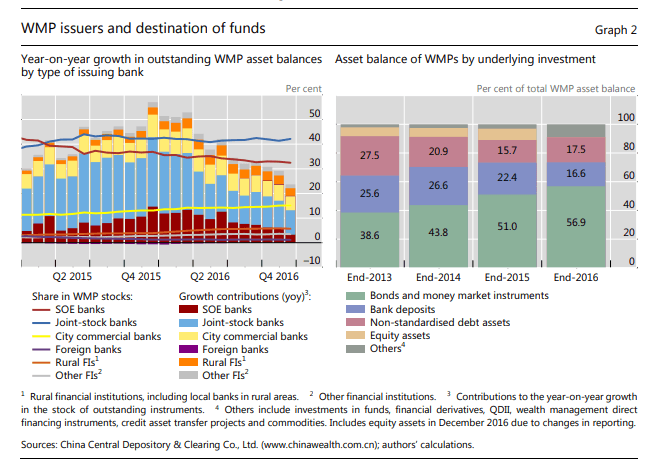 The report notes that shadow banking in China is changing, or at least reallocating assets and liabilities:

The main area of growth has shifted from shadow credit provision to private firms with less privileged access to formal bank credit, towards offering alternative savings instruments (eg WMPs and trust products). Similarly, at the intermediate stage, new and more complex “structured” shadow credit intermediation has emerged and quickly has reached a large scale. This is driven by banks trying to alleviate regulatory burdens (eg NPL provisions or LTD ratio ceilings) through a reclassification of existing bank assets into investment receivables. Tight and growing financial sector linkages further raise the potential for the transmission of financial shocks among savers, banks and the bond market. In addition, new forms of internet-based credit intermediation, such as P2P lending, have been expanding at an extraordinary pace. As a result, shadow banking in China is growing more complex and thereby becoming slightly more similar to the US shadow banking.

The increasing complexity of the shadow banking system – much like Chinese leverage – fits a larger pattern that could come to cause significant problems in a financial crisis when who is liable for the crash of financial products cannot be quickly and accurately determined. The system is attempting to disperse risk among a wider variety of economic concerns, but this is one area where diversification may not be a risk management neutralizer in a market event.

China's State Council announced the debt-equity swaps (DES) framework in October 2016 with a clear aim - to deleverage China’s corporate sector. The levels of balance-sheet leverage from Chinese corporates has rocketed with credit-driven economic growth over the past five years. Specifically, recent research from Moody’s, which investigates the potential ramifications of the DES framework, highlights that China’s non-financial corporate debt to GDP ratio reached sky-high levels of 166.3% in 2016, shooting up from the 96.3% level held as recently as 2008.1

While this isn’t the first time China has applied a DES framework, market and economic parameters are different this time around. As are the implementation details of the DES model. Will the DES framework prove successful in its directive? The answer hinges on implementation management. To date, big banks have been driving execution of DES. These banks are in a position to implement the DES model – holding the high financial thresholds required to set up the execution entities. Large exposures to state-owned enterprises' (SOE) also makes these banks ideal candidates. As of the end of 2017, five of China’s biggest banks, Industrial and Commercial Bank of China Limited (ICBC), China Construction Bank Corporation (CCB), Agricultural Bank of China Limited (ABC), Bank of China Limited (BOC) and Bank of Communications Co., Ltd. (BoCom) had established DES execution – with CCB driving the most volumes DES deals according to transaction data.1

What can history teach us?

In previous DES periods, the execution entity has been an AMC (asset management company) – who would acquire debts of the corporate and later swap the debts back into equity. Execution entities will be able to establish investment funds with a minority stake – the remainder of money can be raised from third-party investors. This DES investment fund will then inject equity into heavily indebted companies, and this capital will be utilized towards repaying outstanding bank debts in full. This system proved useful in the late 1990s in strengthening the balance sheet of Chinese banks - mitigating the risks of risky loans from SOEs. However, the State Council and the China Banking Regulatory Commission (CBRC), have outlined that the DES framework will be different this time around. The new structure expands the potential scale of DES – specifically, the criteria of parties eligible to execute DES deals have been broadened. Further to this, execution entities have been afforded a widening of funding channels. From a risk management perspective, more safeguards have been included, and government intervention will be more restricted.

Now while the DES model sounds like a sensible transfer of capital and risk, in theory, the framework will only provide liquidity relief over the short-term horizon. There are strict criteria of companies eligible for DES. Therefore certain positions remain as leveraged liabilities in the system. Even for those corporates that are included in the DES system, the model only works if the indebted companies fulfill their commitment to buy back the equities created from the swap transactions. The model has thus replaced one type of liability for another in capital markets – thereby failing to meet the overarching goal of deleveraging. On 9 August 2017, over 70 highly levered companies had signed agreements with execution entities to swap more than RMB1 trillion in debt for equity - accounting for 1.1% of Chinese commercial banks’ RMB94 trillion of loans as of 30 June 2017. 1 The volumes are significant, but will the long-term goal of deleveraging be achieved?

How can the risks be combated, and lasting deleveraging be achieved? DES in its current form does not specify how these companies are supposed to fulfill their obligations further down the line. One, albeit intensive, solution would be to implement strategic turnaround plans at DES corporates to enable the companies concerned to improve cash flow and recapitalize. However, as the current program stands, there is no indication of fulfilling this dynamic of the DES model mechanism.

Overall, short-term liquidity will be achieved as the near-term default risk of corporates falls. Perhaps a more accurate characterization is that the default risk is merely delayed. The theory assumes that this time can help corporates enhance business and credit conditions through restructuring. However, there is little clarity on how this will be achieved.

Meanwhile, the question of who will absorb the losses of potential DES defaults remains unanswered. Will it be the third- party investors, the execution entities or their parent banks? Will further government intervention be required? Government bodies may find themselves funding indebted companies' buybacks if the conditions move against the intended direction of enhancing stability.