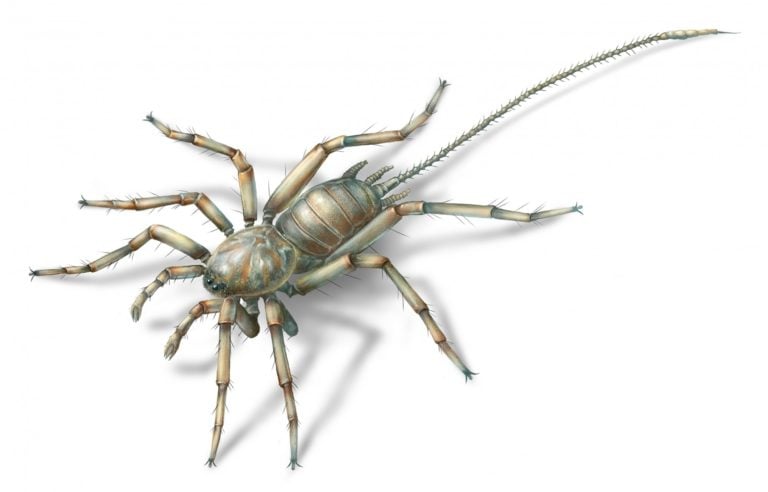 Scientists have discovered a new species of spiders, having one unusual feature is the tail. This spider that lived about 100 million years ago, was named Chimerarachne yingi (in honor of the monster Chimera from Greek mythology).

The arachnids date to the Cretaceous period — when Tyrannosaurus rex lived — and display a combination of prehistoric and modern characteristics. The researchers who discovered the species named it Chimerarachne yingi, “Chimerarachne” after the mythological chimera, said to be made of parts from different animals.

“We have known for a decade or so that spiders evolved from arachnids that had tails, more than 315 million years ago,” said study co-author Dr. Russell Garwood of the University of Manchester. “We’ve not found fossils before that showed this, and so finding this now was a huge (but really fantastic) surprise.”

Four Chimerarachne specimens were found. They had spinnerets to make silk, like modern spiders do, but the researchers believe that it did not use them to weave webs. The function of the tail is unknown.

“*Chimerarachne* fills the gap between Palaeozoic arachnids with tails known from rocks (uraraneids) and true spiders, and the fact the new fossils have been wonderfully preserved in Burmese amber has allowed an unmatched detail of study,” said Dr. Ricardo Perez-De-La Fuente of the Oxford Museum of Natural History. “There are many surprises still waiting to be unearthed in the fossil record. Like most unexpected findings in palaeontology, it probably brings more questions than answers, but questions are what keep things exciting and push the boundaries of science.”

According to Dr. Paul Selden of the University of Kansas, though it isn’t probable, it’s possible that some Chimerarachne are still alive in the rainforest today. “We haven’t found them, but some of these forests aren’t that well-studied, and it’s only a tiny creature.