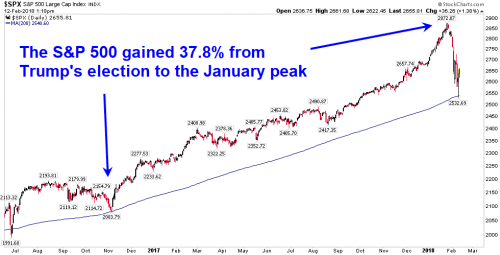 After gaining nearly 38% from the November 2016 election to Trump's State of the Union speech, the amazing stock market boom finally suffered its first test.

Just as soon as the S&P 500 logged a new entry in the record books of going 18 months without a 5% correction, another record quickly followed with the fastest decline from an all-time high in 90 years.

Now, the market’s down for the year, having given back all of its gains so far in 2018. This time on Financial Sense Newshour we spoke with Craig Johnson from Piper Jaffray about what the recent decline means for the markets and investors.

Market Likely to Drop then Pop Into Year End

Last month in January, as the market was going up in a parabolic fashion, Johnson called for the S&P 500 to drop to 2400 and for the Dow Jones Industrial Average to fall to 22,000. After this correction, possibly by the spring or summer of 2018, he sees equities heading higher, with the S&P projected to hit 2850 by the end of the year.

“We feel good about our 2850 objective for the S&P for the year, but we don’t believe it’s going to be made in a linear manner,” he said.

The reason is, he’s concerned about rising interest rates, and we’re seeing bond yields across the board rise to new multi-year highs.

The long end of the curve hasn’t gone up much yet, but we may see a sharp adjustment higher in rates, Johnson noted. This will likely leave us closer to a 3 percent 10-year bond yield sooner than many probably realize.

We’ve also got a weaker dollar internationally, which hurts international investors in US debt, who are seeing both currency valuation and principal losses on the fixed income side.

Is a Bear Emerging, or Something Else?

“I don’t want to get too hung up on the classification of whether this is a pullback, correction or bear market when we’ve got to put it into the context of the bigger trend out there,” Johnson said. “That’s why I’ve been trying to call this more of a resetting of investor expectations.”

Volatility funds are signaling this may be the case, as we’ve seen many blow up recently. This likely means volatility has returned, Johnson noted.

“It’s a sign that maybe not everything is as perfect as everybody had previously believed,” Johnson said. “We have an interesting combination of stocks that are pretty extended, and we have rates that are going up pretty quickly.”

These rate increases should lead to an asset allocation shift from fixed income to equities. This won’t be a linear transition, however.

Johnson advises taking some money out of bonds, putting it in cash, and waiting to see if the market comes to a more attractive level for a buying opportunity.

What’s Going on With Bonds?

We’ve seen investors pile into some of these fixed-income funds thinking that there could never be any loses.

This is the largest technical change that many will probably see in their lifetime, he added.

Ultimately, we’re likely looking at the return of inflation and the need for inflation-related strategies coming out of this, which is where investors should be placing their attention, Johnson said.