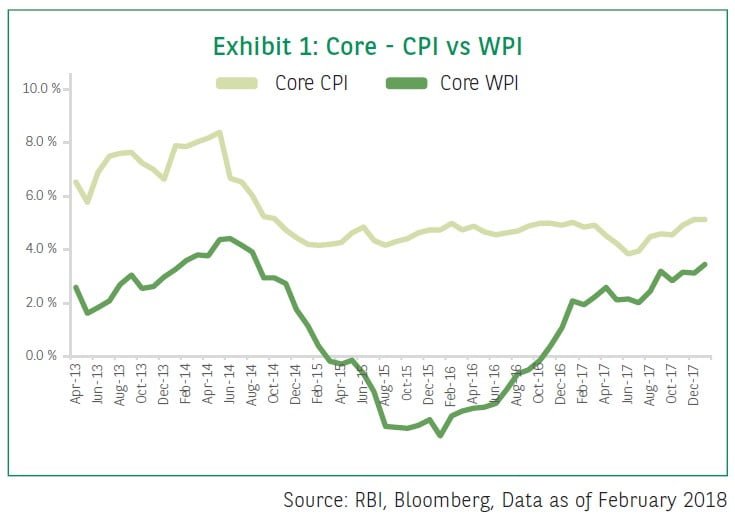 It is interesting to note the compression of core WPI with respect to core CPI (Exhibit 1). WPI is reflective of the wholesale prices and is always a precursor to the retail prices. Thus, the compression is evidence of the pent-up demand that the Indian economy has been witnessing post August 2017. It is to be noted that GST was implemented on July 2017. After the initial hiccups, the regulatory relief provided by the government saw an inventory re-stocking. This move along with positive global growth data further supported the domestic growth. Our back tested data suggests that WPI always leads CPI with a lag of three months. And now with core inflation firming up in WPI we remain confident of the increasing inflationary pulse in the economy.

The Credit – Deposit ratio (Exhibit 2) also shows how post August 2017 the credit demand has been higher than the underlying growth in the deposits by a significant margin. In addition to that the banking system has witnessed increased leakage in currency over the same period, (Exhibit 3) indicating that the best of the banking system liquidity is behind us. The remonetised economy is supporting the informal sector thereby adding impetus to the growing economic impulse. Apart from the impact on the banking system liquidity, we believe the increase in currency in circulation is also reflective of the higher inflationary expectations. 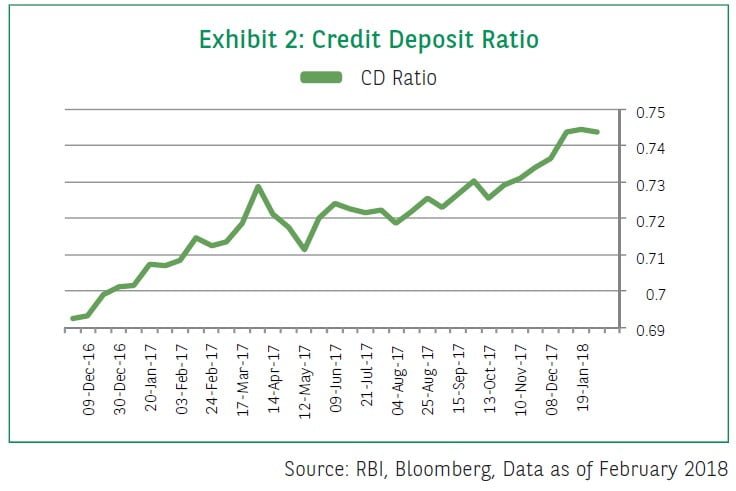 Since the beginning of CY 2018 inflation, globally has been on the rise. The latest core CPI data in the US @0.30% MoM together with higher average hourly earnings of wages triggering renewed fear of hawkish Federal Reserve (FED). This led to a sell-off in the US treasuries with 10-year trading at 2.92% highest since the start of 2014. The new 10-year Indian G-sec bond closed around 7.60%. Any further rise in the US bond yields arising out of additional demand to fund the US fiscal deficit may lead to money moving out from emerging markets back to the US, thereby putting pressure on EM currencies and bonds. 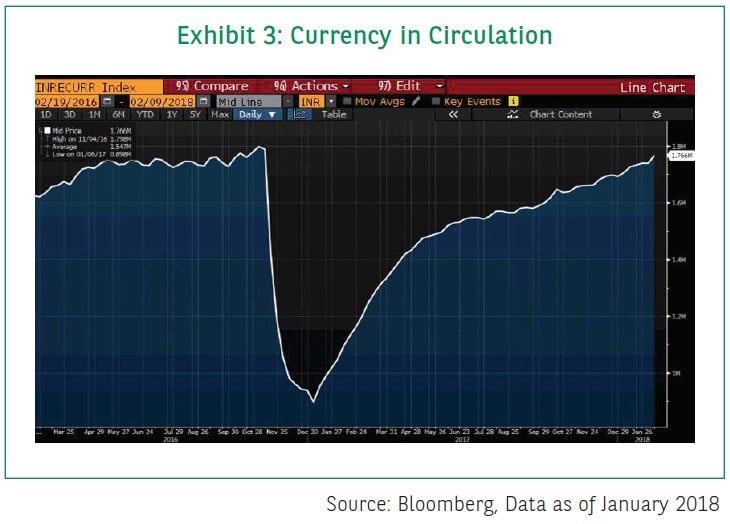 Back home, the best of banking system liquidity is behind us, rising inflationary expectations and the rising credit demand may lead to sharp rise in bank deposit rates to fund the credit growth. We do not expect RBI to provide permanent liquidity to the banking system at this point in time to cover this deficit created by shortage of deposits. Only after a sustained rise in deposit creation by banking system we can be sure that bond yields have topped. Till then we expect bond markets to remain volatile with a steepening bias.