ValueWalk
Home Business Bitcoin Correlation With Other Assets Near Zero: Is It Good For Diversification? 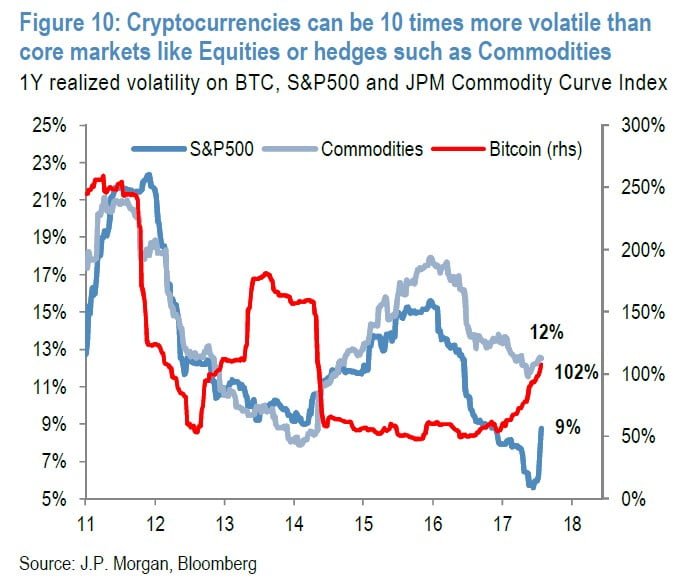 The bitcoin price topped $10,000 again but reversed course soon after, as price volatility continued early on Friday. Critics of cryptocurrency advise others to steer clear of them because of the extreme volatility, although proponents note that adding another asset class to their investment portfolio would mean even more diversification. While bitcoin correlation with core asset classes is extremely low, making it potentially good for diversification, critics argue that there’s something more important than correlation when it comes to deciding whether to buy bitcoin or other cryptocurrencies.

In a recent report on cryptocurrencies, JPMorgan analyst John Normand said that what matters most is the impact including bitcoin or any other cryptocurrency will impact the risk-return characteristics of an investment portfolio. He explained that there are two main ingredients that create this impact: bitcoin correlation and price volatility.

As far as the latter goes, he said that the bitcoin price volatility demonstrates that cryptocurrencies can be as much as 10 times more volatile than other core markets:

He also said that of particular importance is the impact on the portfolio’s risk-return characteristics “over the long term or during periods of extreme cyclical or political stress,” which might include a recession, sudden increase in inflation, crises involving currencies, and “collapse of the payments system.”

Proper diversification offers some protection against such events, but should bitcoin be included as an agent of portfolio diversification? In short, the JPMorgan analyst sees the potential for bitcoin to offer some level of value in terms of diversification for the medium term, but with “a few caveats.”

Normand noted that cryptocurrencies haven’t been around long enough to track their impacts over multiple business cycles. However, it is possible to draw some conclusions from what’s been going on with the bitcoin price over the last few years.

For example, he believes that bitcoin has offered “some improvement in risk-adjusted returns over the medium term, but no ability to mitigate portfolio drawdown during periods of acute market stress like equity flash crashes of August 2015 and February 2018.” He also offered two other areas of concerns for hedgers, which are limited liquidity and “unstable risk-return characteristics” which are common in the early years of a market’s development.

One of the “caveats,” according to Normand, is the lack of liquidity compared to other commonly-used hedges, while the other is the potential for the risk-return characteristics to change “significantly” because the market is still in its early stages. Further, he said history shows that even though bitcoin correlation with other asset classes is low, it hasn’t been able to offset drawdowns in the equity market “during periods of “acute market stress.” 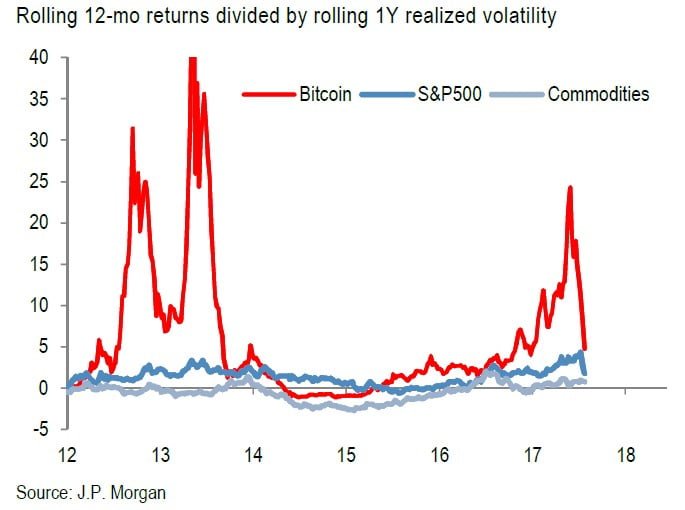 Further, he said that bitcoin correlation with other asset classes has averaged close to zero over the last five years. Meanwhile, other traditional hedges still have “mildly positive” correlation, on average.

However, Normand adds that investors who focus mostly on stocks will still find that the asset classes with the greatest inverse correlations are the yen and Treasuries.

So does the low bitcoin correlation mean that adding it will improve portfolio diversification? He notes both good and bad impacts. He said a “modest” allocation to bitcoin in the past several years would indeed have improved efficiency of a “hypothetical multi-asset portfolio” that’s 60% equities and 40% fixed income. Of the fixed income allotment, 20% is allocated to Treasuries, 15% is to U.S. high-grade credit, and 5% is to EM debt in local currencies. 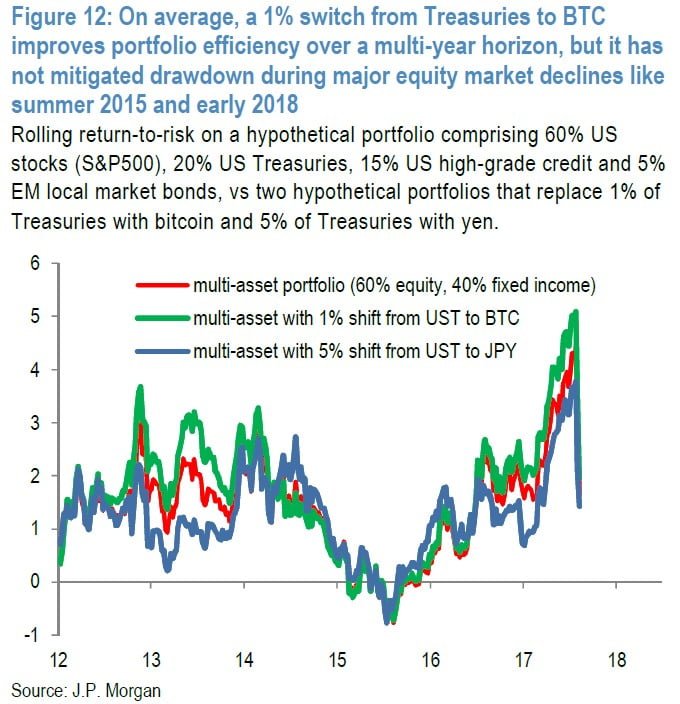 He also found that switching just 1% of the Treasury allocation to bitcoin results in “only somewhat-encouraging results.” It does result in better medium-term risk-adjusted returns, while switching to a different hedging instrument, such as gold or commodities, offered no material changes to efficiency.

It’s not all good news, however. Having bitcoin in the hypothetical portfolio didn’t prevent the portfolio drawdown between mid-2015 and early 2016. At that time, both U.S. stocks and EMs were tumbling, while bitcoin was largely range-bound. The cryptocurrency also offered no protection against major market stresses, such as the equity flash crashes in August 2015 and February 2018. Normand’s findings are interesting when comparing them to this post, which argues that bitcoin “thrives against all odds.”

There’s also the fact that large institutional investors may have a difficult time allocating only 1% of their portfolios to cryptocurrencies, which we note could be yet another reason that asset managers have yet to fully embrace them.