Bitcoin was at $15,000 when I wrote this post before Christmas warning against getting involved in the bitcoin or any cryptocurrency market.  Bitcoin has crashed to $8,000 today losing about 50% of its value in two months. 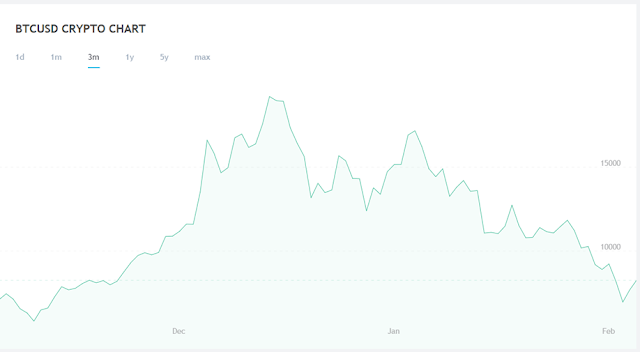 However, one crytocurrency analysis also pointed out:

In other words, only the newbie dumb money got caught in this “Bitcoin correction” holding the bag while the whales/institution investors made boat loads of money.

Then Bloomberg reported that based on the finding of a survey of more than 3,000 people conducted in mid-January,

Nearly 20 percent of people who own cryptocurrencies such as Bitcoin went into debt to buy it, or bought it on margin.

Theoretically, it is more than likely regular retail investors are the ones that would resort to debt finance a bitcoin investment.

Piecing them together, you come up with a very disturbing picture, that is, the ones who took out debt or margins and losing the most on bitcoins were the regular retail investors with blind faith in Bitcoin partly due to the hype by Wall Street and mainstream media.

This is also further evidence of the major pain to come particularly for many retail investors.  I wonder just how many of them took out debt to buy bitcoin close to its peak?  And how many are taking out more debt to invest in Bitcoin right now since it is on a 50% off sale?

With Bitcoin losing so much in value, I imagine some of these 20% bitcoin owners are unable to pay back the debt.  Some of them probably already got liquidated by their brokers.  It is like the gambler’s mentality, you need to gamble more to win back all the losses.  What is the most readily available source for a non-institution retail investor to get the money to place more bets?  Credit cards.

Worry not, banks see that risk miles away.  That’s why banks including Citigroup, JPMorgan, Bank of America have banned purchases of Bitcoin and other cryptocurrencies on their credit cards.

The banks are worried that borrowers may not repay, and that protections they offer shoppers could backfire.

If banks have lost faith in bitcoin, then investors should also take notice before jumping in again.

According to Bloomberg, analysts also blame the credit tightening as being partly responsible for the downward pressure on prices of Bitcoin and many other cryptocurrencies.

Honestly, for an asset class that should not have been elevated to such status to begin with, crash is only a matter of time.  You can blame many things fundamentally wrong and contributory to its crash correction, but no, banks being banks tightening credit should not be one of them.