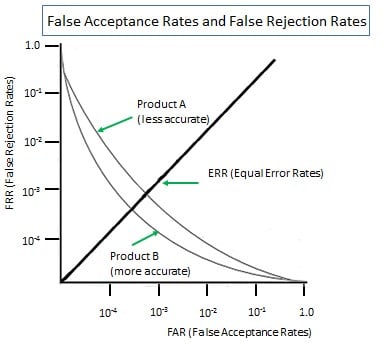 In a mind-boggling report from India where the biometrics; is mandatory for its Aadhaar-based Public Distribution System, it says ‘biometric authentication failure at the ration shop deprived a woman of the subsidized grain she was entitled to’.

The report refers to ‘failure’ and ‘glitch’ of biometrics, but it is not necessarily correct. 'False Rejection' as against 'False Acceptance' is inherent in biometrics; there is no biometrics that is free from False Rejection.

A graph (*1) below shows the False Acceptance Rates (FAR) and False Rejection Rates (FRR) of two biometrics products - one relatively more accurate and the other less accurate.

What this graph indicates is, firstly, that FAR and FRR are not the variables that are independent from each other, but are dependent on each other.

A FAR could be fixed only against a certain FRR, i.e., both variables can be positioned only at the same single point on the same single curve. In other words, the couple of a FAR and a FRR can exist only in a certain combination. 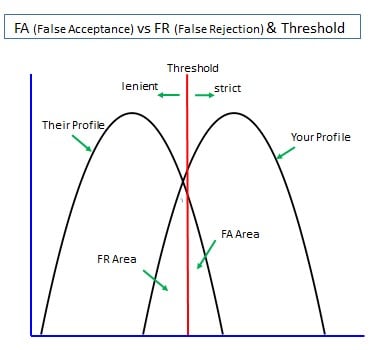 Another graph (*2) helps us to grasp how FAR and FRR are mutually dependent and also in a trade-off relation.

If the officials responsible for the Aadhaar-based PDS had been informed of the above, they must have provided a fallback means in case the false rejection. Then this kind of misery could have been avoided.  We have to wonder how it was possible that these people were not advised of the issue of false rejection.

Hitoshi Kokuman is the inventor of Expanded Password System that enables people to make use of episodic image memories for intuitive and secure identity authentication.  He has kept raising the issue of wrong usage of biometrics with passwords and the false sense of security it brings for 16 years.

Mnemonic Security Inc. was founded in 2001 by Hitoshi Kokumai for promoting Expanded Password System. "Mnemonic" and "Mneme" used in the company name and logo imply that our identity must be protected with our own memory and volition.  Following the pilotscale operations in Japan, it is currently searching for the location to set up the global headquarters.

Related Article by this Author