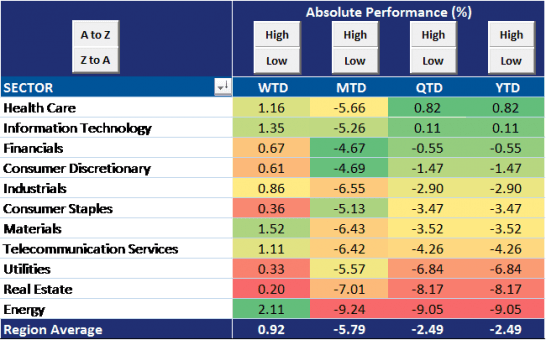 Interestingly, the KLSU EM Energy sector is not only the best performing sector in the emerging markets, it is also the best performing region/sector in the combined all country world. Its lead is rather significant, outpacing the next closest sector by over 4.5%. It is also the sector with the best breadth in either the developed or emerging markets, with 79% of EM energy stocks above the 200-day moving average. It is important to remember the big picture here. Commodity prices are as cheap relative to stock prices as they have ever been. In the chart below, I show the relative performance of the GSCI Commodity Index relative to the Dow Jones Industrial Average for the trailing 100 years. Commodities have historically made three major lows relative to stocks and appear to be making the fourth. The first low was at the peak of the Roaring Twenties stock market boom in 1929 where auto and radio stocks soared. The second low was in the early 1970s after Nixon severed the US Dollar link to gold when the Nifty-Fifty stocks were the rage. The third low was at the peak of the internet bubble in the late 1990s. Each of these periods were preceded by a decade (1920s, 1960s and 1990s) of huge credit expansion that boosted equity prices to unsustainable levels. We are currently experiencing the fourth major low in commodities relative to equites. We clearly have had a decade of easy financial conditions and massive credit expansion leading to elevated equity valuations. In each peak equity phase (1929, 1973, 1999) there were new ways invented to justify equity valuations which we also seem to be re-running as well. Just like price-to-click was a poor defense of technology valuations in 1999, hearing the justification of the fundamental value of Bitcoin seems eerily similar.

With this big picture in mind, seeing DM energy stocks test their relative lows makes for an interesting opportunity. These kind of lows only come around once a generation.