Quantitative value thinker Ben Inker, head of GMO’s asset allocation team, takes a fatalistic view on investing. In their fourth-quarter letters to investors,  a year in which GMO lost nearly $40 billion in assets at one point due to underperformance, he considers what life would be like working as Stalin’s portfolio manager. Imagine the pressure of underperformance! Pension fund CIOs are under this gun as well, not just investment managers. And it is here that Inker asks some profound questions about the qualifications of those selecting managers – and without explicitly saying it opens up broader questions in portfolio construction. 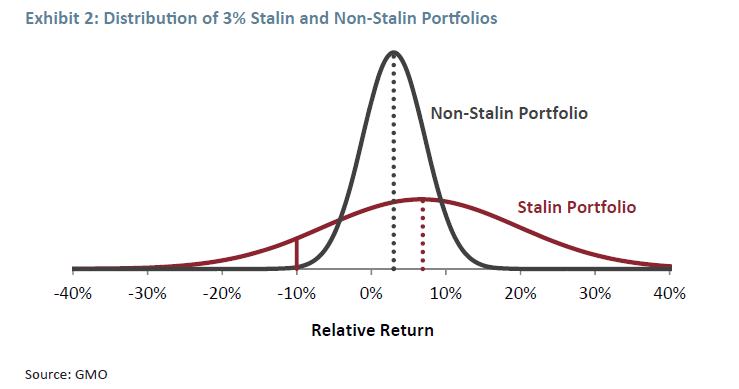 Joseph Vissarionovich Stalin was a vicious dictator of the Soviet Union and ran the country with an iron fist for over 20 years. The “Great Purge” he led is credited in resulting in nearly 600,000 deaths,  but his reign of terror  did not end until his death. Stalin stepped down from his throne of terror in 1953 at a time when the cold war was heating up.

It is this man that Inker wakes up at night dreading is this Stalinesque pension fund taskmaster to whom he is required to generate benchmark busting returns… or else.

But then he looks at a dictatorial approach that doesn’t have many nuances. It is a success with moderate reward or catastrophe:

If you succeed, you get a nice dacha on the Black Sea and a pension of your own. If you fail, you get shot. It is an entertaining problem set-up, and for the more quantitative among us, leads to a refreshingly simple utility function – maximize the probability of meeting or beating the target return. But if Stalin actually had any intention of living off of his pension, it is a lousy ultimatum to give his chief investment officer (CIO). It completely ignores the impact of magnitudes, and magnitudes matter. Barely missing the goal and achieving 4.4% above inflation is importantly different than returning 15% below inflation, and for Stalin, they are the same – failure.

Inker is making an argument for measuring not just the gain or loss, but the magnitude – with an emphasis on downside deviation in the formula as receiving different punishment than upside reward. There is an entire cult-like philosophy in quantitative investing that supports this notion and questions the Nobel Prize-winning Sharpe Ratio as a result.

Inker doesn’t go down that rabbit hole. He has his own consensus-busting opinions, and it involves aggressive manager selection.

Inker knows the Stalin-type investment manager and has put together a quantitative filter to identify them. “They are the concentrated, high tracking error, ‘high conviction’ managers that have gained a significant following, particularly in the endowment and foundation universe.” 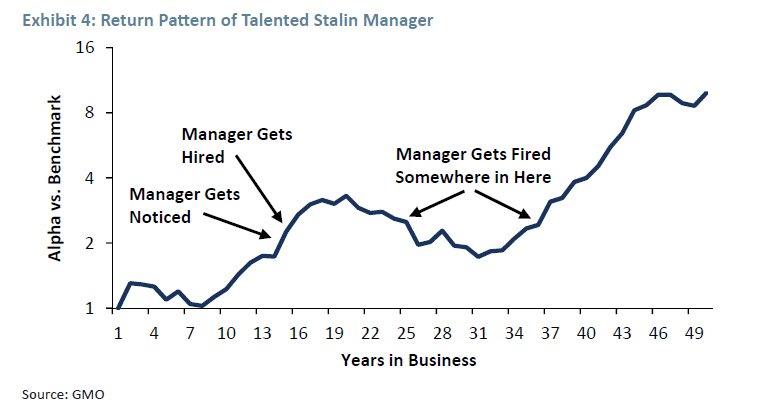 While he has a profile, actually modeling when to invest in a little different process. He looks at most institutional “performance chasers” and recognizes buying on the drawdown, not after new equity highs have been reached, is the best model, if there even was a model that would consistently work for fundamental managers:

Hiring such managers only makes sense if you think you are good at identifying talented active managers, of course. But just as important and somewhat less intuitively, it also requires that you are significantly better than the average CIO at avoiding the performance chasing that traditionally accompanies the firing and hiring of managers. If (and only if ) you can meet those two requirements, a portfolio built from a number of Stalinesque pieces will give you higher returns without much downside in the form of greater volatility or tracking error. If you can’t meet both requirements, such aggressive managers are more likely to hurt you than help.

Inker then starts to fantasize. What if he were a pension fund CIO, could he operate a Stalinesque approach?

So let’s assume you do not want to Stalinize your whole portfolio. That doesn’t mean Stalinesque pieces can’t be used to build a less scary overall portfolio. Let’s imagine you are an institution looking to outperform your benchmark by at least 1% over time. You will do this by hiring 20 outside managers who are all trying to beat their respective benchmarks.3 You’re pretty good at hiring talented managers, with a 50% hit rate. The combination of trading costs and management fees for the portfolios is 1%. How should you go about achieving 1% excess return? One way would be to tell your managers to shoot for 3% alpha. The 50% of your managers with skill will average 3% alpha. The 50% with no skill will average -1% due to costs, and therefore your portfolio will achieve 1% alpha on average. Your overall tracking error will be 1%, for a very nice IR of 1.0.4 But let’s say that instead of the “sensible” thing of aiming for your target return, you instead tell your managers to pretend you are Stalin, and to maximize their probability of achieving 3% alpha. Those portfolios will be meaningfully less efficient than the 3% expected alpha portfolios – in my example their IR will fall from around 0.68 to around 0.53. Moreover, let’s assume that the costs of the strategy go up as well, so that the losers will lose by 1.5% instead of 1%.5 Despite those handicaps, the overall portfolio expected alpha more than doubles from 1% to 2.7%, and the IR is only slightly lower at 0.9.

In reality, however, the cycle works a bit differently:

In the long run, it’s a wonderful ride, with the manager leaving a client who hired them on day 1 with over 8 times as much money as the benchmark over 50 years. But it’s easy to imagine a client actually losing money with this manager despite the strong alpha. If the manager didn’t get on investors’ radar screens unless they had 5% alpha since inception and at least a 3-year track record (why hire a Stalin manager who hasn’t shown strong performance, after all?), it’s not until year 15 of the manager’s career that investors will really take notice. The due diligence then might take another year, with the hiring occurring in year 16. Over the next 10 years, the manager loses 27% relative to the benchmark. You’d have to somehow hold on for over 20 years to so much as break even. And this from a manager who had skill!

What Inker doesn’t much address is the lack of a portfolio management system that quantitatively models performance based on beta market benchmarks. Have you ever asked an institutional portfolio manager to explain their process in three sentence overview and have it relate to how much beta is in the expected return? After the 20 to 40-minute obfuscation pitch, what is left is predictable to a certain degree.

“The combination of manager aggressiveness and a difficulty disentangling luck from skill can be a deadly one,” Inker wrote. 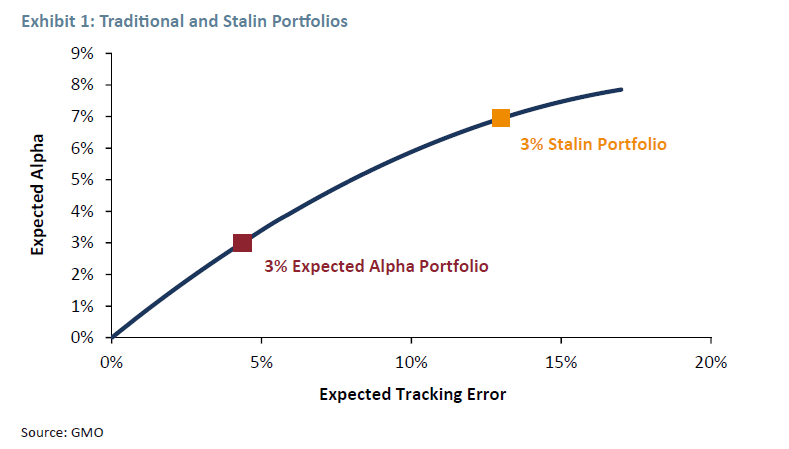