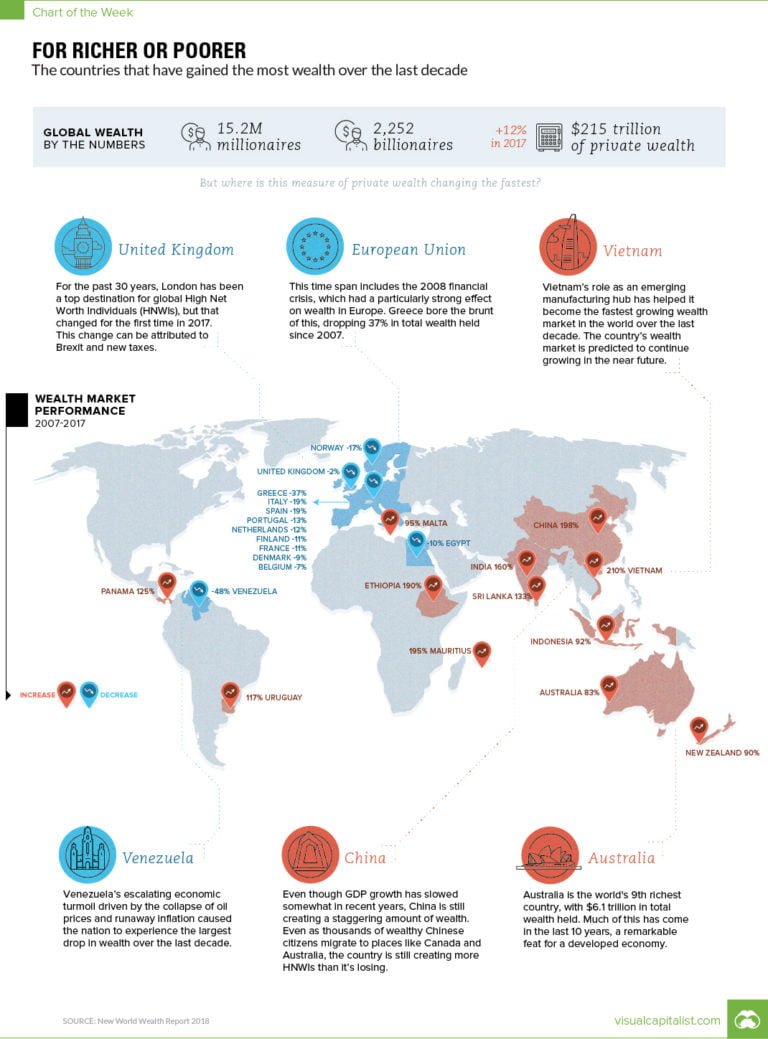 The world has now accumulated $215 trillion in private wealth, a 12% increase over 2017, according to the latest report by market research company New World Wealth.

But the picture of global wealth hasn’t always been constant – in fact, it’s always shifting based on market performance, the movement of high net worth individuals (HNWIs), demographic trends, and other factors.

Over the last decade, from 2007 to 2017, here are the top countries based on percentage of new wealth added (in $USD terms):

Not surprisingly, plenty of developing markets made this list.

Vietnam, which had a 210% growth in wealth held over the last decade, is an emerging manufacturing hub. The market is projected by New World Wealth to grow a further 200% in the next 10 years, bolstered by strong growth in its local healthcare, manufacturing, and financial services sectors.

The small island nation of Mauritius is one of Africa’s brightest success stories, with a 195% growth in wealth over the last 10 years. With favorable tax policies, beautiful beaches, and better relative safety ratings, HNWIs have been moving to the island en masse.

Just missing the Top 10 list above are two developed economies: New Zealand and Australia. Interestingly, these two markets grew in wealth 90% and 83% respectively over the last decade, which is extremely impressive for countries that already had a solid base of wealth to start with.

Here are the markets that saw total wealth decrease over the last 10 years, in terms of U.S. dollars.

The crisis in Venezuela had a particularly rough impact on wealth. The country, which was once the richest in South America, lost 48% of its wealth in $USD terms over the last decade.

It’s also worth mentioning that many of the countries that saw wealth decrease over this time period are European – that’s because the 2008 financial crisis (and the ensuing sovereign debt crisis) hit Europe particularly hard.