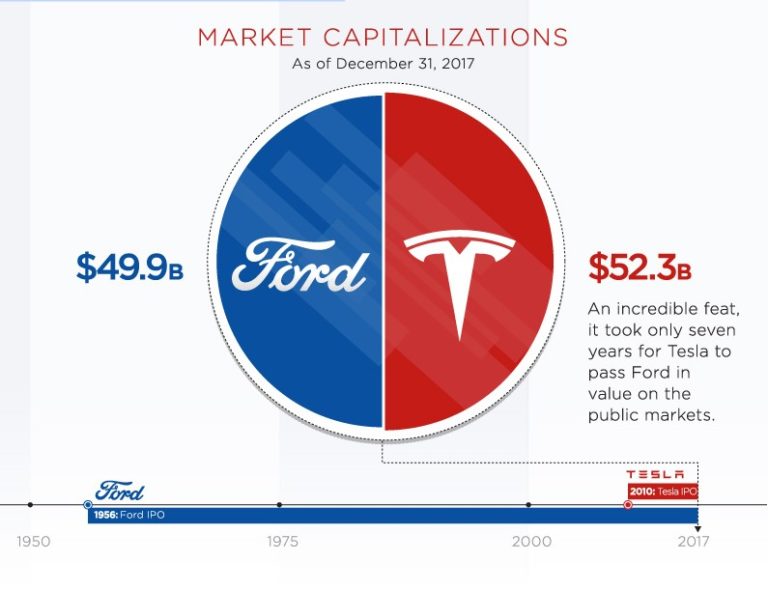 As we showed in Part 1: Tesla’s Origin Story, the launch of the Roadster was a public relations success, but it created all kinds of problems internally. There were massive cost overruns, a revolving door of CEOs, layoffs, and even a narrow escape from bankruptcy.

Fortunately, by 2010 the company was able to forget these troubles after a successful IPO. The company secured $226 million in capital, and hitting the public markets started a roller coaster ride of growth.

Today’s giant infographic comes to us from Global Energy Metals, and it is the second part of our three-part Rise of Tesla Series, which is a definitive source for everything you ever wanted to know about the company.

Part 2 shows major events from 2010 until today, and it tracks the company’s rapid growth along the way.

Tesla was the first American car company to IPO since The Ford Motor Company went public in 1956.

Interestingly, it only took seven years for Tesla to match Ford’s value – here are the major events during this stretch of time that made this incredible feat possible.

After securing funding from the public markets, Tesla was positioned for its next big leap:

It was time to focus on the next phase of Tesla’s strategy: to build the company’s first real car from scratch – and to help the company achieve the economies of scale, impact, and reputation it desired.

In 2011, Tesla announces that the Roadster will be officially discontinued.

The Model S was Tesla’s chance to build a car around the electric powertrain, rather than the other way around.

When we started Model S, it was a clean sheet of paper.

But despite the success of the new model, Tesla still faced a giant problem. Lithium-ion batteries were still too expensive for a mass market car to be feasible, and the company needed to “bet the farm” on an idea to bring EVs to the mainstream.

Tesla reveals initial plans for its Gigafactory concept, an ambitious attempt to bring economies of scale to the battery industry.

In time, the details of those plans solidified:

The company believed that through economies of scale, reduction of waste, a closer supply chain, vertical integration, and process optimization, that the cost of batteries could be sufficiently reduced to make a mass market EV possible.

Under Tesla’s first plan, the Gigafactory would be ramped up to produce batteries for 500,000 EVs per year by 2020. Later on, the company eventually moved that target forward by two years.

Tesla makes significant advances in software, hardware, and its mission.

After massive and repeated delays because of issues with the “falcon wing” doors, the Model X finally is released.

In the same year, the Tesla Powerwall is also announced. Using a high-capacity lithium-ion battery and proprietary technology – the Powerwall is a major step towards Tesla achieving its major end goal of integrating energy generation and storage in the home.

Tesla unveils its Model 3 – the car for the masses that is supposed to change it all.

Here are the specs for the most basic model, which is available at $35,000:

After being announced, the Model 3 quickly garnered 500,000 pre-orders. To put the magnitude of this number in perspective – in six years of production of the Model S, the company has only delivered about 200,000 cars in total so far.

In 2016, Tesla also announces that it is taking over of Elon Musk’s other companies, SolarCity, for $2.6 billion of stock. Elon Musk owns 22% of SolarCity shares at the time of the takeover.

The goal: to build a seamlessly integrated battery and solar product that looks beautiful.

Tesla also unveils the new Roadster – the second-gen version of the car that started it all.

This time, it has unbelievable specs:

The new Roadster will go into production in 2020.

A Look to the Future

In 1956, the IPO of the Ford Motor Company was the single largest IPO in Wall Street’s history.

Tesla IPO’d a whopping 54 years later, and the company has already passed Ford in value:

An incredible feat, it took only seven years for Tesla to pass Ford in value on the public markets. However, this is still the beginning of Tesla’s story.

See Musk’s vision for the future in Part 3 of this series.