This year started off with a bang as the S&P 500 Index rallied 2.6% to its best week in more than a year. The massive rally was marked by some very interesting trends, according to Bank of America Merrill Lynch. Tech sector flows continued to drive the rally, but investors sold more than half of the sectors in the index, with sentiment on Consumer Discretionary sector flows growing increasingly negative.

However, sales of single stocks reached their lowest level since August 2017, they added. Institutional clients continued to sell stocks as their selling streak reached 10 weeks; institutional clients were the biggest sellers of single stocks. Private clients were in second place, and they’ve been flipping back and forth between buying and selling for the last five weeks. Last week marked the first week in three weeks that hedge funds bought equities. Share repurchases slowed last week following an unusually strong end of December.

BAML clients sold stocks in six sectors, with Consumer Discretionary sector flows leading the sales. The sector also has the longest selling streak of all the sectors at nine weeks. Institutional and retail clients led the sales last week. The BAML team added that Consumer Discretionary sector flows have on a four-week average basis have remained negative for the last 50 weeks.

According to the BAML team, Consumer Discretionary sector flows have been shifting more and more negative because funds have been slashing their Overweight positions in the sector since early 2017. Because of this long period of negative Consumer Discretionary sector flows, the relative weight of the sector among funds reached its lowest level in 18 months.

They add that this could mean that positioning risk for Consumer Discretionary during this earnings season is lower. Despite that, BAML remains Underweight on the sector due to various other reasons, including its historical underperformance during late-cycle periods.

The BAML team also found that Tech sector flows were the largest inflows of all 11 sectors in the S&P last week. They add that the positive momentum in Tech sector flows has picked up since the end of the year, with institutional clients leading the buying. In fact, their firm’s clients have bought Tech stocks for the last three weeks, and Tech sector flows on a four-week average basis have reached their highest level since January 2015. 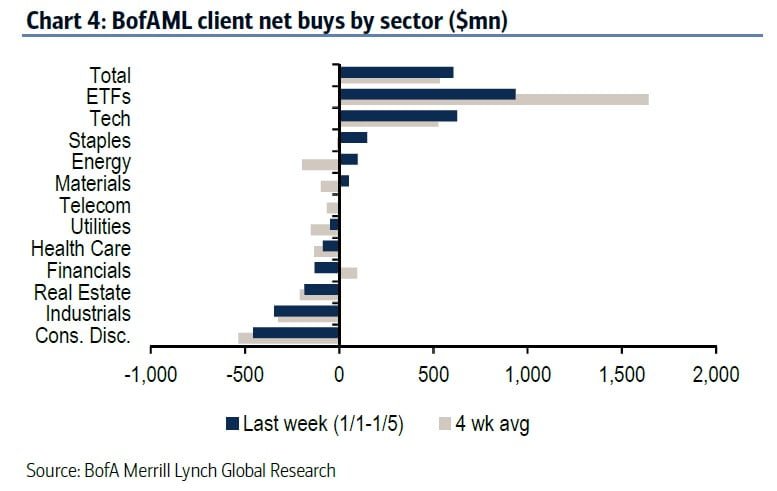 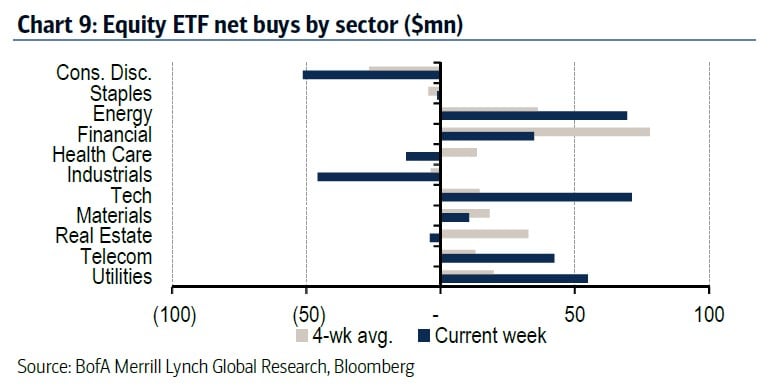