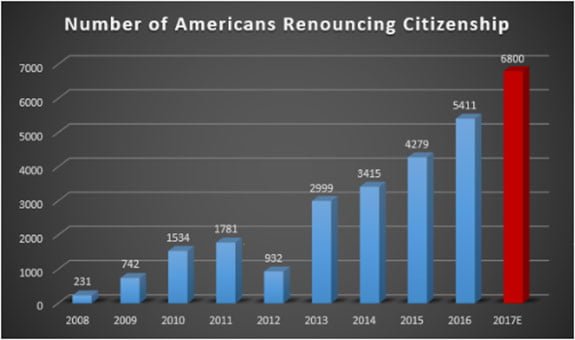 I have a friend who likes to travel. She brings me back adorable little trinkets.

On my desk, I have a ceramic elephant from Thailand, a fluffy Scottish sheep and a rabbit made of soft Peruvian alpaca wool watching me as I work.

She says that she just likes to see the world, experience new cultures.

And judging by the numbers coming out of the government, she’s not alone.

We’re poised to hit a new record for 2017 and the latest tax plan isn’t helping to keep some Americans.

But you’ve got some options at your fingertips to consider before you toss aside the U.S passport.

Running for the Exits

2017 was a difficult year. Politics split the country. We continued to argue over rights, inequality, health care, fake news … and then we ended the year on taxes.

It feels like it always comes back to taxes.

Yes, Congress signed off on a new tax bill that promises to reduce taxes for many Americans, at least temporarily.

But that didn’t stop some Americans from giving up their citizenship. Tax reform wasn’t enough to reduce the hassle and headache of the Internal Revenue Service.

At that pace, we will see an estimated 6,800 Americans walk away from their citizenship. That’s up roughly 25.6% from 2016. The government will release the final 2017 numbers in February.

The driving force behind the increase in Americans giving up their U.S. citizenship continues to be taxes, particularly FATCA.

Enacted in 2010 and slowly rolled out, FATCA was the government’s attempt to rein in tax evasion. The result has been higher fees and more reporting requirements for foreign banks. Americans now find it harder to open accounts overseas.

In short, Americans just aren’t worth the trouble.

But you don’t have to toss away your American passport if you want to reduce your U.S. tax obligation and still take advantage of overseas investment opportunities.

You Have a Choice

Every day our experts cover a number of ways you can take advantage of opportunities within the market. We are always looking for that next big stock move or sector shift.

I hope you were able to capture some of those gains in your portfolio and more last year.

We’re all chasing the next great opportunity, but it is critical that you’re also taking a moment to properly protect your assets against Uncle Sam’s greedy hands.

Are you using the right retirement investment vehicles to maximize your tax savings?

Are you giving up hard-won gains over to brokerage firms and banks in the form of fees?

Are you taking advantage of all the offshore opportunities that are still available to Americans?

The government has not closed all the doors on Americans when it comes to options for effectively protecting and growing your wealth. And you don’t need to be a part of the 1% to make use of these options.

Now is a great time to start educating yourself on your options. Make 2018 the year you take control of your finances. Don’t let Uncle Sam determine your future. I don’t trust him to have your best interest at heart.

And if you still want to walk away from America, you’ve got some options there too.