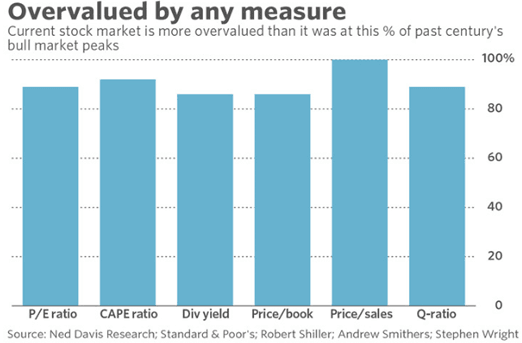 1. US Stocks Most Overvalued Since Dotcom Bubble in 2000

3. Conclusions – What To Do Now? Consider Alternatives

I don’t make market predictions very often. Normally, I leave those decisions to the professional money managers we recommend at Halbert Wealth Management. However, some recent developments have made me very concerned that the US equity markets are at high risk for a serious downward correction just ahead.

You may recall that the S&P 500 Index plunged by almost 45% starting in September 2000 until the bottom in August 2002. In 2000, most investors believed the bull market would continue indefinitely as they do today. “Things are different this time,” we were told back then. But they weren’t, and one of the worst bear markets in history unfolded.

I’m not predicting that will happen just ahead. US stocks have continued to soar since the Dow topped 25,000 and this could continue… or not. No one knows where this greatest bull market will top out. Yet today I’m going to present you with some analysis (which you aren’t likely to read elsewhere) that makes me believe we may be approaching the top, or at least a serious downward correction. Let’s get started.

US Stocks Most Overvalued Since Dotcom Bubble in 2000

“Dow 25,000 Only Brings the Bull Market Closer to a Painful End”

Again, no one can predict market tops, and Mark readily admits that the current bubble in US stocks could continue higher. But his latest analysis is very unusual and sobering. Here goes.

Hulbert began his latest column with this warning: “The U.S. stock market is extremely overvalued by almost any measure.” He cautions that bullish sentiment is rampant. He goes on to support that view with the following analysis.

“Consider the stock market’s valuation today compared to where it stood at each of the bull market tops of the last 120 years. Depending on which valuation metric used — I focused on six of the best-known — equities currently are more overvalued than they were at between 86% and 100% of past bull market tops. (See chart.)

Unless the law of gravity no longer applies, it’s difficult to reach any conclusion other than [Dennis] Gartman’s [latest prediction]: ‘It will end and it will end badly.’

To be sure, the stock market has been overvalued for several years now, and it has nevertheless continued upwards. So investors with short memories can dismiss valuation concerns by pointing out how poor a job they do at market timing.

But that doesn’t mean valuations are useless. It’s just that valuations have their biggest impact over many years. Over shorter-term periods of a couple of years, valuations exert only a very weak gravitational pull on the market.

…But valuations do matter, sooner or later. And it’s a key feature of investors’ psychology at bull market tops to ignore valuations. So this column is important precisely to the extent you’re likely to dismiss it.

Ben Inker, co-head of the asset-allocation team at GMO and a colleague of [Jeremy] Grantham’s, draws an analogy to a leaf in a hurricane: ‘You have no idea where the leaf will be a minute or an hour from now. But eventually gravity will win out and it will land on the ground.’

The bottom line: Enjoy the party as long as it lasts. But it will come to an end. And if you’re like most investors, when that top comes you will forget ever having heard this warning.”

Hulbert’s point is that the major US stock indexes are now overvalued by virtually every commonly-followed metric and are extremely overvalued by several of them. What this means is it won’t take much of a negative surprise to turn equities sharply lower from this point on.

As I warned in my BLOG last week, a government shutdown on Friday could be that catalyst for a serious downward correction for equities just ahead.

Here’s another interesting and troubling bit of analysis on the stock markets that you probably didn’t see either. This analysis comes from Dana Lyons, founder of J. Lyons Fund Management, which he published on January 5. Here are the main excerpts:

“Each month, the American Association of Individual Investors (AAII) surveys its member regarding their current level of stock, bond and cash allocation… The monthly allocation survey tends to move at a measured pace, dictated by the movement in asset prices. Thus, we have found it to be a fairly useful barometer of longer-term investor sentiment.

Investor stock allocation in the survey, which began just after the crash in 1987, has ranged from a low of 41% at the depth of the financial crisis in early 2009 to a high of 77%, hit at the peak of the dotcom bubble in early 2000…

The December reading of the AAII stock allocation jumped from 69% up to 72%. That marks the highest level of stock allocation since the heady days of the 2000 dotcom bubble. Furthermore, the 3% jump in allocation was the largest monthly increase in 4 years. Thus, you have an elevated and accelerating degree of bullishness… 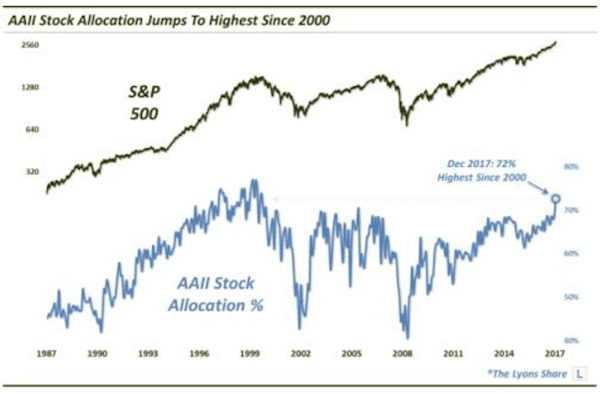 So does this mean that the stock market is a bubble on the verge of implosion? Of course not. In the near-term, the stock market will do whatever it wants… We will simply say that this reading implies a significant level of potential longer-term risk in the market.

…if the market does start to head meaningfully lower, this condition could exacerbate the decline given the amount of capital with the potential to exit the market. In such an event, the substantial potential risk could, thus, become manifested risk.”

Let me be clear: Lyons is not recommending that his clients and subscribers get out of the market or hedge long positions at this point. Like Hulbert, he says this trend might continue a while longer perhaps. The AAII Stock Allocation Percent, at 72%, is still below the all-time peak of 77% in late 1999-2000.

I think the most salient point Lyons makes is in the last paragraph above. What he is warning is that the next downward correction (whenever it comes) is very likely to be severe “given the amount of capital with the potential to exit the market.”

Studies have shown for decades that retail investors tend to get in late in bull markets. As we can see in the chart above, investors have been increasing their allocations to stocks sharply over the last couple of years, and especially last year. As Lyons points, the increase in equity allocations in December alone was the largest in four years.

Conclusions – What To Do Now? Consider Alternatives

Some in the financial media still argue that US stocks are either undervalued or fairly- valued. Hulbert blows that argument out of the water! Stocks as a whole are more overvalued today than at any time since the dotcom bubble in 2000.

As Lyons points out, investors have shifted more and more of their money into stocks and equity ETFs, especially over the last year. Most of these investors know instinctively that stocks are overvalued, so they’re nervous.

It is my opinion that many will be quick to bail out at the first sign of weakness, and the market is way, way overdue for a downward correction. If these latecomers decide to head for the exits, that virtually assures a severe correction or worse.

In my BLOG last week, I explained that the odds for a government shutdown at the end of this week are higher than usual. Maybe you should take a few minutes to read that analysis, because I fear that a shutdown could be a big negative for stocks.

As you know by now, we offer a stable of alternative investments at Halbert Wealth Management. Many are “actively-managed” strategies with the ability to move out of the market and into cash, or hedge long positions, if market conditions dictate.

We also have some very interesting programs that do not invest in stocks. In fact, watch your inbox tomorrow for our introduction of three successful real estate strategies that can further diversify your portfolio.

If you haven’t considered our successful, professionally-managed strategies, I highly recommend you call Phil Denney or Spencer Wright at 800-348-3601. Talk to them about your investment portfolio and what concerns you have. They will show you strategies that could be important to have, especially if we have a market correction just ahead.

Phil and Spencer have both been with me for over 18 years, and they are experts on the strategies we recommend and investing in general. They are true professionals who don’t work on commission and would love to work with you – no matter where you live. We have clients all across the US that we have never met in person. Don’t let that stop you, especially not now!

Hulbert: How to Prepare For the End of the Bull Market

What Could Stop the Bull Market in 2018

Gary’s Between the Lines Blog: Another Government Shutdown Looms on January 19