ValueWalk
Home Technology NASA turn the temperature up with their mission to the Sun And... 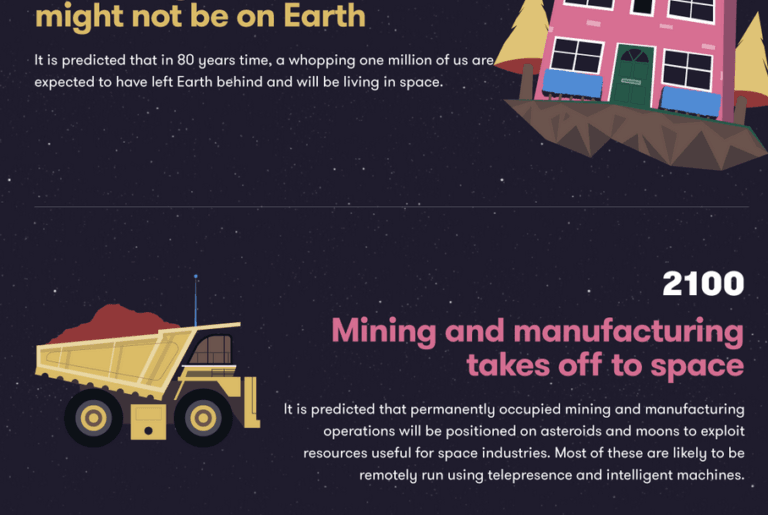 It has been just short of 50 years since the first man on the moon in 1969 and since then it is safe to say we have come a long way in space travel.  With the space race to Mars in full steam ahead between the likes of NASA, Mars One and SpaceX, what can we expect from the next 100 years of space travel?

Whilst the stars have been saved exclusively for astronauts over the past 50 years, this is set to change as space travel will become open to the public.

So what exactly is predicted for the next 100 years of space travel?  Will yours, your children’s and your grandchildren’s lives change because of it?

Perhaps you will be vacationing on Mars or an asteroid, or maybe you have emigrated off of Earth altogether!  RS Components reveal all with their graphic guiding you to infinity and beyond across the next century.

NASA turn the temperature up with their mission to the Sun

NASA kickstart this year with a groundbreaking mission that will see humanity’s first venture to the Sun. NASA’s Parker Solar Probe is set to travel seven times closer than any other spacecraft has reached to the star’s surface. Just the size of a small car, this spacecraft is set to reach just 3.9 million miles from the surface of the Sun. Putting this into perspective, the Earth’s average distance to the Sun is a mind-boggling 93 million miles, so it is safe to say this mission has a long journey ahead of itself!

Once at its destination this mission is set to carry out investigations on the star’s solar wind, a topic which scientists have wanted to look into for over 60 years

Another pioneering venture into space taking place this year is the private American company Moon Express’ mission to carry out the first commercial voyage to the Moon.  With the ultimate goal of mining the Moon, this expedition is followed closely by the Lunar Outpost expedition that will see the exploration of the lunar South Pole, where there are concentrations of water and other valuable resources.

How long will it take for the Moon we look at every evening to have a commercial value?

Who will reach Mars first?

The race to Mars is highly debated in the news, so who is expected to get there first?

According to predictions, it will be Mars One at the finish line, who in September 2022 believe that they will have the necessary water, oxygen and artificial atmosphere produced to then take and send its first astronauts off to the Red Planet.

NASA on the other hand, has given itself a few more years to reach this goal, with a deadline of 2033 to have sent humans to Mars.

In the meantime, NASA have set their sights on sending humans elsewhere. In their mission to capture an asteroid and redirect it to orbit the moon, they are hoping to send humans there too!

Top destinations to emigrate will shift away from Earth

There have currently been just over 500 people who have travelled to space, but with companies like NASA, SpaceX and Mars One determined to get humans off of Earth as soon as possible, this figure is expected to reach 10,000 by 2050!

Not only is it predicted that you will be able to take a holiday off of our planet, you may even find yourself permanently living off of Earth in just over 30 years time, with colonies expected to exist on the Moon, Mars and stations deep in space.

50 years on from this prediction and that figure will have reached a whopping one million people living off on Earth by 2100.  You might be thinking about retiring to Mars, or maybe going to visit friends and family who have started their lives elsewhere in space.

The last 50 years of space travel have been extremely exciting and this is not set to change across the next 100 years. Astronauts will no longer be the only ones reaching for the stars in the near future.
Question is, are you ready for your world to get a whole lot bigger?