ValueWalk
Home Technology Goldman: No We’re Not In An Equity Market Bubble 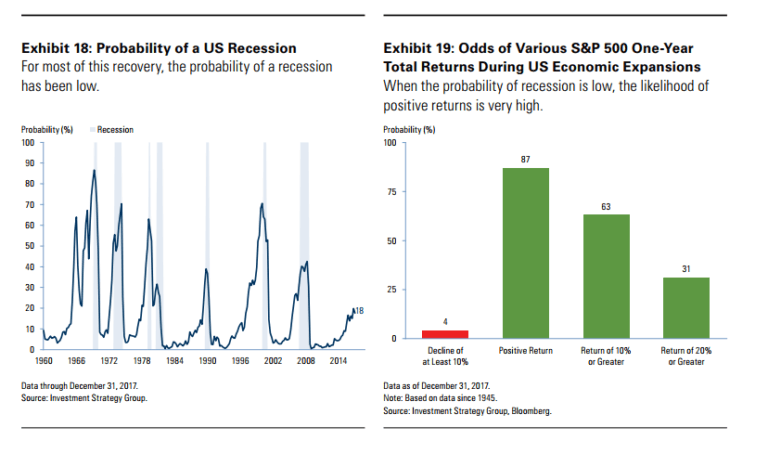 With the S&P 500 trading around its highest level ever recorded, analysts all over the world are calling this rally an equity market bubble. They’re also falling each other to try and pinpoint exactly when the bubble will eventually burst.

However, the number of bearish analysts is matched equally with bullish analysts who believe that despite US equity markets’ total return of 376% since the trough of the crisis, there’s still headroom for markets to run higher in the months and years ahead.

Goldman Sachs' Investment Strategy team falls into the latter camp. In a report sent out to clients last week, the investment bank's analysts opine: "While we acknowledge that US equity valuations, which are now in the 10th decline, are high, we do not believe that equities are in a bubble. We believe that this equity rally has been driven by four factors that will persist into next year, barring a major external shock."

These four key factors are:

US equities have added nearly 400% since the financial crisis low. These gains have not been magicked out of thin air. As Goldman's report notes, since 2009 the US economic recovery has created trillions of dollars in wealth, which is reflected in equity prices. Specifically, the US economy is $2.8 trillion bigger today than it was in 2009 dollars -- that's around as much as the entire economy of the UK. The unemployment rate is at its lowest level since WWII, and 2.1 million jobs were created last year alone.

At the household level, there's also be a substantial increase in wealth. There has been a "168 percentage point increase in household net worth as a share of disposable income (from 505% to a high of 673%) at a time when real median income itself had risen by 11% from its trough levels."

Barring any unforeseen disruptions, these tailwinds should continue to driven economic growth and corporate earnings growth for some time.

And the team at Goldman expects further earnings growth to continue to support the market. Indeed, since the trough of the cycle, earnings growth has accounted for over 46% of S&P 500 returns and dividends have accounted for 21%. The remaining third has been due to multiple expansion. As Goldman sums up, "67% of the returns of this bull market were not driven by multiple expansion: a bull market where the preponderance of returns are from underlying earnings and dividends is unlikely to be in bubble territory."

Then there's Goldman's proposed lower for longer new inflation regime to consider. According to the report, the long-term average inflation as measured by CPI is 3.7%, but the current low inflation regime average is 1.9%. When you layer this lower inflation regime over current equity valuations, the market appears nowhere near as overvalued today as some have suggested. Using the widely quoted Shiller CAPE ratio, "at the current CAPE level of 32, US equities appear extended by only 24%, but compared with the long-term median; US equities appear extended by a whopping 78%." Considering this outcome, once again the report concludes that equity multiples "have not expanded beyond reason to generate the 376% return since the trough of the S&P 500 index."

The third-factor present implying there's no equity market bubble is the "low probability of recession" according to Goldman. "In the post--WWII period" the report opines, "recessions in the US have been triggered by Federal Reserve tightening of monetary, by economic imbalances...or by external shocks." Trump's new tax fiscal stimulus coupled with continued accommodative monetary policy, indicates the first trigger that's typically sparked a bear market is not present today. Further, there are few if any imbalances in the economy following years of increased banking sector regulation. The one unknown is the existence of external shocks, the risk of which Goldman's analysts acknowledge have "increased significantly." 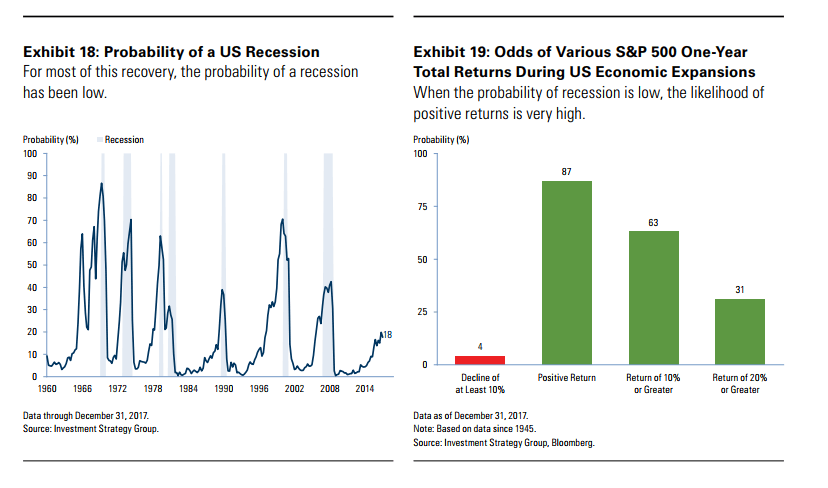 The fourth and final reason citied by Goldman's Investment Strategy Group as to why there's no equity market bubble is the almost continual "disdain for this rally." One clear marker of investors' continued dislike of equities is clear in US equity mutual fund and ETF flows:

"Cumulative flows into US equity mutual funds and exchange-traded funds (ETFs) since the trough of US equities in March 2009 have been negative, measuring a total of $185 billion of outflows. In contrast, flows into non-US developed market equities have been $788 billion, into emerging market equities $259 billion and into bond funds $1.8 trillion."

Even though investors have ignored US equities, they have, in fact, outperformed all of their international peers as companies have been taking the other side of the trade. Since March 2009, buybacks have totaled $4.5 trillion absorbing all of the outflows from investors and pension funds. 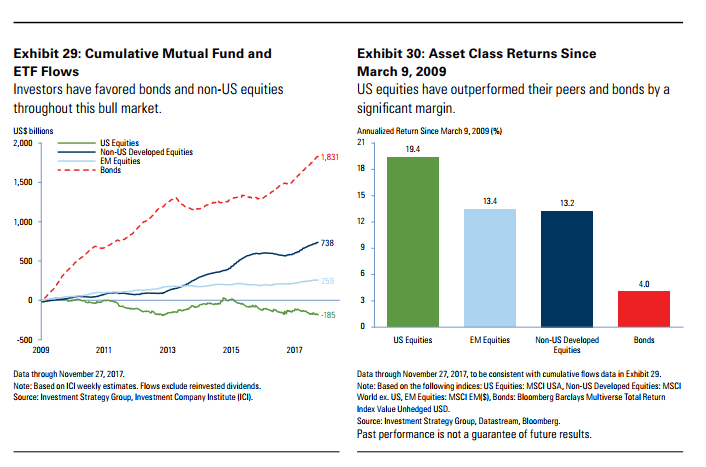