Home Economics Show Me The $$: Highest Paid CEOs in America

The stock market continues to set record highs, and the Republican tax cut is about to hit workers’ paychecks in February. The new tax law also impacts skyrocketing executive compensation, which made us wonder how a CEO compensation correlates with the company’s financial performance. We created a new graph to find out. 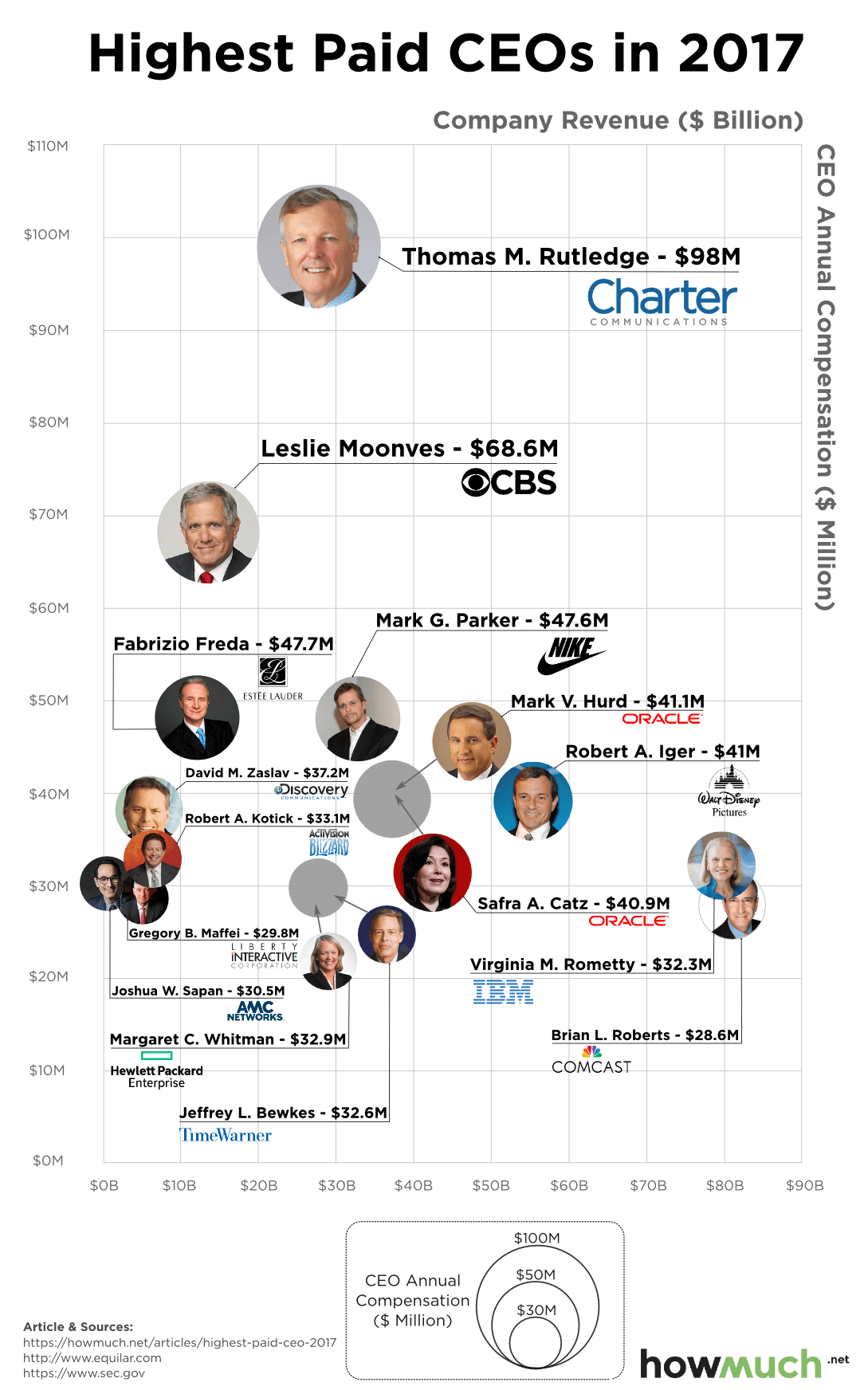 We took our numbers from 24/7WallSt, which tracks things like executive compensation on a regular basis. We put each of the 25 highest paid CEO’s on a scatterplot graph, where the vertical axis corresponds to the CEO’s personal earnings and the horizontal matches the company’s annual revenue. We then sized each point on the graph to the size of the CEO’s salary—the larger the circle, the more he or she makes. Our viz makes several different trends in executive compensation readily apparent.

There’s a clear trend in the middle, where a company’s annual revenue parallels its CEO’s salary. Starting with Meg Whitman ($32.9M) from Hewlett Packard, and moving all the way to Mark Hurd ($41.1M) at Nike, there’s a substantial cluster of CEO’s whose pay increases as their companies’ revenue increases. This suggests a linear correlation: as the company grows and generates more money, the CEO is rewarded with more money too. That makes perfect sense.

But here’s another obvious fact about our graph: there are examples where a CEO’s compensation is out of line with the company’s performance. This can cut both ways. Brian Roberts ($28.6) from Comcast and Virginia Rometty ($32.3) from IBM both seem relatively underpaid for how large their respective companies are. On the other side, Thomas Rutledge ($98) from Charter Communications and Leslie Moonves ($68.6) at CBS both appear to excessively overpaid—they’re way above everyone else. Rutledge makes $268,000 every single day, counting weekends and holidays. That’s hard to believe.

It’s also worth pointing out that there are a lot of huge companies missing from our graph. Where are companies like Facebook or Amazon? They take a radically different approach to executive compensation, focusing instead on stock options. Mark Zuckerberg from Facebook literally makes $1 a year. Jeff Bezos from Amazon makes about $1.7M a year with a base salary of only $82,000. But don’t shed a tear for these billionaires—Bezos’ personal net worth shot up by $2B after Amazon bought Whole Foods. Not bad for a day’s work.

Some CEOs clearly make a killing even though they don’t work for the largest or most profitable companies. It raises important questions about the value these individuals contribute to their respective employers. That being said, making a quarter million each day—every day—is great work if you can get it.