Value investors long these three stocks may want to re-evaluate their positions amidst the recent insider activity.

Sharon Simpson, Trustee of the Barclay and Sharon Simpson 2007 Trust, sold 120,825 shares of Simpson Manufacturing Co (NYSE: SSD) worth a total of $7.2 million on Tuesday, January 30.

What's more interesting in fact, Simpson has sold $41.5 million worth of stock since the beginning of December according to MarketBeat. That's roughly 1.5% of the company's total market capitalization.

The company's shares last traded at $58.85 as of Wednesday approximately 95.8% of its 52-week high. While the stock is near its high, could the recent insider transactions signal a troubling road ahead for shareholders?

Finbox.io applies pre-built valuation models to calculate a fair value for a given stock and uses consensus Wall Street estimates for the forecast when available. The company's average fair value of $42.64 implies -27.5% downside and is calculated from 12 separate analyses as shown in the table above.

Bruce Berkowitz is the founder of Fairholme Capital Management and in 2009, he was named the DS fund manager of the decade by Morningstar. Fairholme owned $173.5 million worth of Seritage Growth Properties (NYSE: SRG) stock as of September 30th which was reported by the fund's 13F filing with the SEC.

This position represented 19.1% of the firm's stock portfolio. However, Berkowitz has been reducing his position in Seritage Growth Properties since November. Fairholme has sold 1,205,400 shares worth $49 million which has effectively cut his position by 28%. 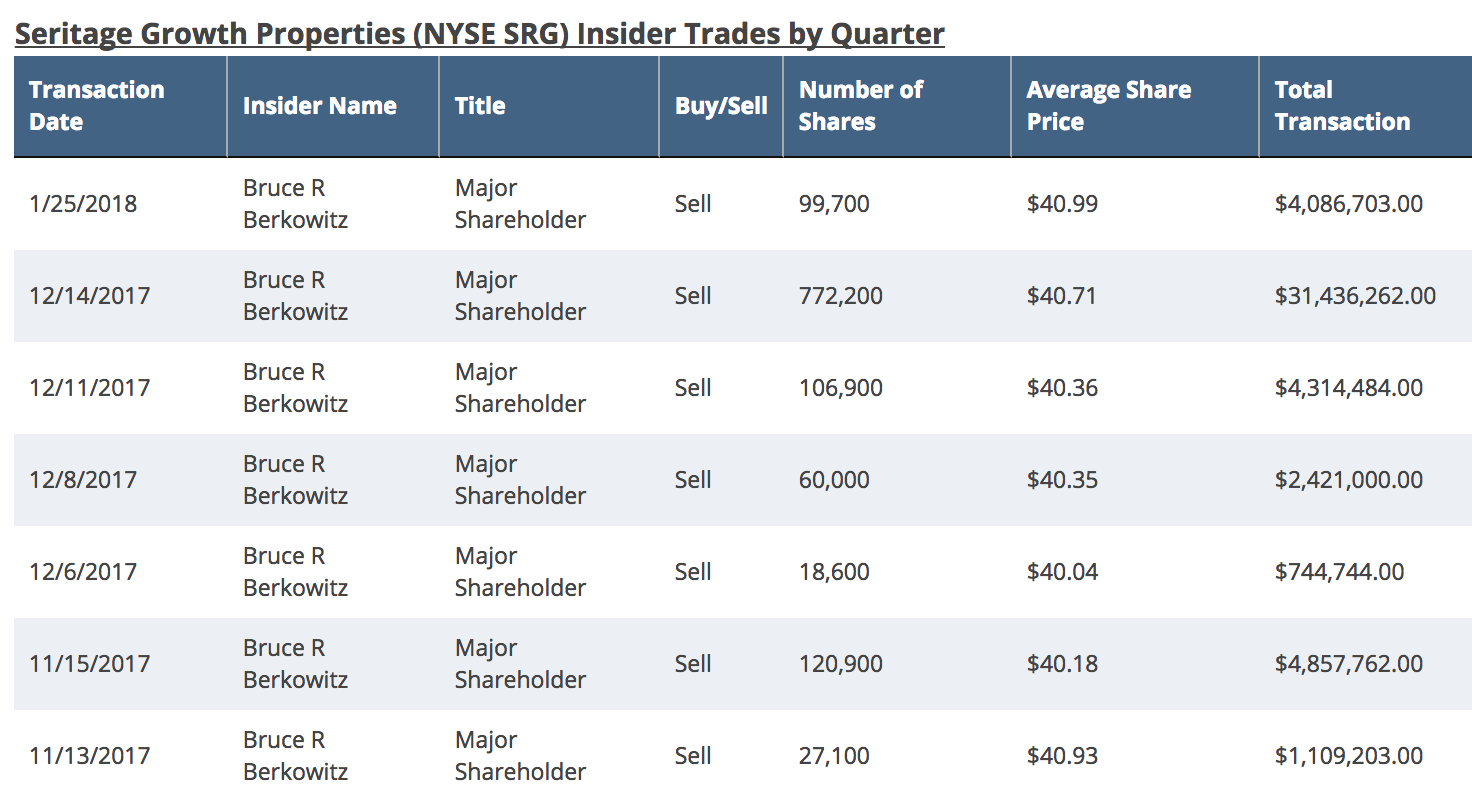 Seritage Growth Properties is a publicly-traded REIT with 230 wholly-owned properties and 28 joint venture properties totaling over 40 million square feet of space across 49 states and Puerto Rico. The Company was formed to unlock the underlying real estate value of a high-quality retail portfolio it acquired from Sears Holdings in July 2015.

Shares of the company are up 3.3% over the last year offering minuscule returns for investors. The stock last traded at $41.06 as of Wednesday and 7 separate valuation analyses imply that there is 25.6% downside relative to its current trading price.

Although Fairholme has been reducing its position, it is important to note that the hedge fund still owns more than 3 million class A common shares.

A number of top executives have been selling shares of At Home Group (NYSE: HOME) according to MarketBeat including Lewis Bird III (CEO), Judd Nystrom (CFO), and Peter Corsa (COO). Total insider selling has totaled $12.3 million in the month of January alone representing almost 1% of At Home Group's market capitalization. 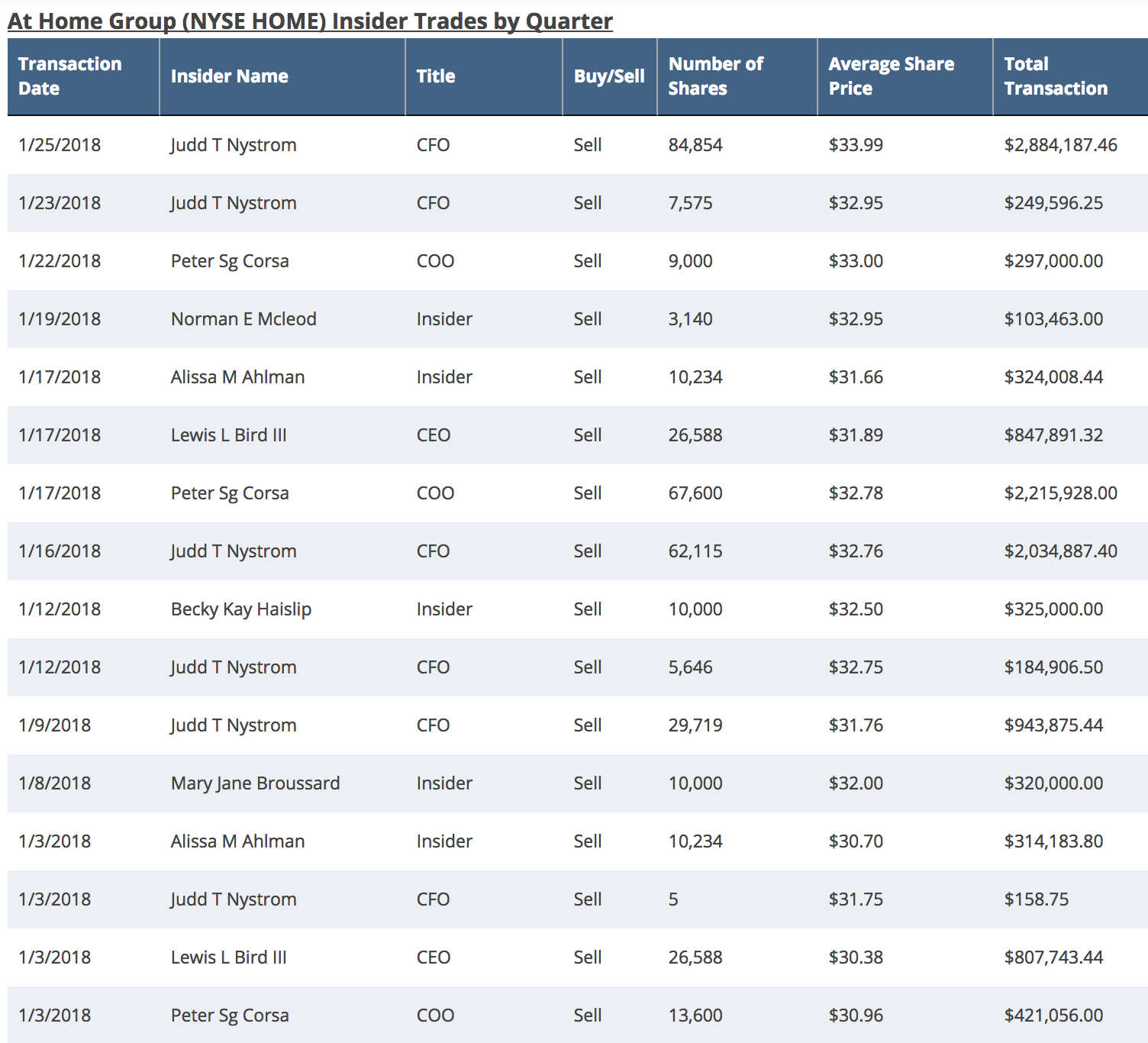 At Home Group operates home decor superstores in the United States. The company’s stores offer items such as accent furniture, frames, pottery, bar stools, garden décor, rugs and mats, bedding and bath products, beds and mattresses. As of November 15, 2017, it operated 150 stores in 34 states. The company was founded in 1979 and is headquartered in Plano, Texas.

A company's EBITDA multiple is calculated by dividing its Enterprise Value by EBITDA and is often used to benchmark the fair market value of a company. Its key benefit over the P/E multiple is that it's capital structure-neutral, and, therefore, better at comparing companies with different levels of debt. 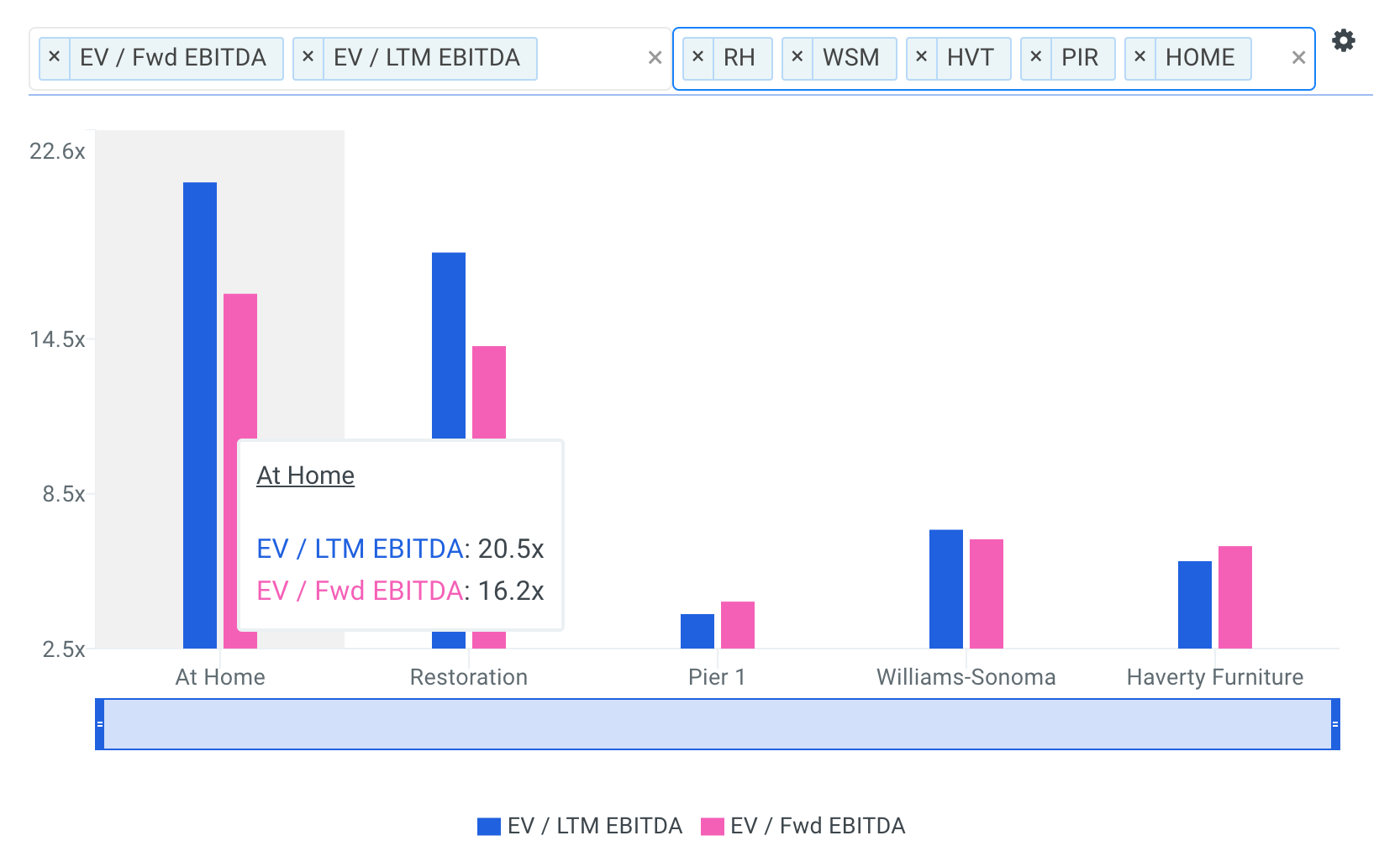 Shares of At Home Group are up 55.5% over the last three months and up 112.1% over the last year. While investors have enjoyed the recent gains, the stock's valuation is becoming stretched which is likely the reason for the insider transaction.

While insider activity on its own is not necessarily a buy or sell signal, it may offer insight into how ownership and management feel about a company's future prospects. Keeping an eye on the activities of insiders and institutions can help investors make a more informed investment decision.