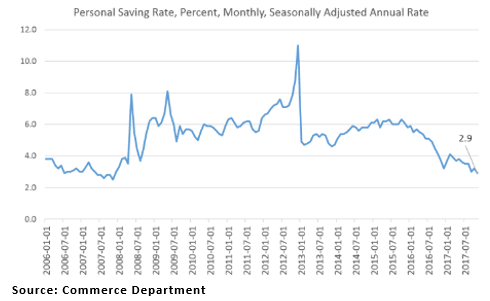 Over the last several months, I have written often about how the US economy has strengthened significantly since the disappointing 1Q of last year. This time last year, most forecasters felt the economy would do well to grow by 2% in 2017.

As we know now, the economy accelerated by over 3% (annual rate) in the 2Q and 3Q and expectations are that we had 3+% growth in the 4Q as well. We’ll know for sure this Friday when the Commerce Department releases its first estimate of 4Q GDP.

So, the question now is, what to expect of the economy in 2018? Unlike this time last year, optimism abounds today. Some forecasters are going so far as to predict GDP growth of 4% or better this year as the tax cuts kick in. Some are now predicting an economic boom this year.

As I will explain below, I do not agree that we’ll see an economic boom this year. I do expect that we will see continued growth, but not what I would call a boom.

There are several reasons for my somewhat less optimistic view of US economic growth, but chief among them is the fact that the US savings rate fell to the lowest level since 2007 last year. Another is the fact that credit card balances soared last year. Both of these trends will reverse at some point, and this will limit growth this year and perhaps beyond.

Let me be clear: I do expect another year of relatively strong economic performance in 2018 in the range of 2.5%-3.5%, but I’m not expecting a boom of 4%-5% as some are now forecasting. Let’s get started.

Americans spent more and saved less in November (latest data available) as a result of the strong economy, robust consumer confidence, the prospect of tax cuts and buoyant financial markets – all of which led to the robust holiday shopping season.

Americans are saving at the slowest pace in a decade, likely in anticipation of continued job and wealth gains as stock indexes barreled to multiple new record highs late last year, and the unemployment rate fell to a 17-year low at 4.1%. The personal savings rate in November was only 2.9%, the Commerce Department reported in late December — falling below 3% for the first time since November 2007, just before the last recession hit.

The income data fell short of economists’ expectations, while the spending data exceeded them. Elevated consumer confidence makes people more comfortable saving less. But the savings rate can’t fall forever, so income growth needs to pick up if consumers are to continue spending at their recent pace.

The point with regard to the economy this year is that with the decade-low savings rate, consumers in general are not likely to further increase spending in 2018. As we will see below, it is also possible that some consumers may have to dial back spending somewhat. Again, this does not suggest that the economy is headed for a boom this year.

Before we leave the issue of the very low US savings rate, you might be interested to know which income groups save the most and least money. Obviously, the wealthy (the Top 1%) save much more of their income (38%) than lower-income groups. But you may be surprised to see that the next Top 9% save far less (12%) than you might think. And it’s almost certainly well below that today (the chart is dated). 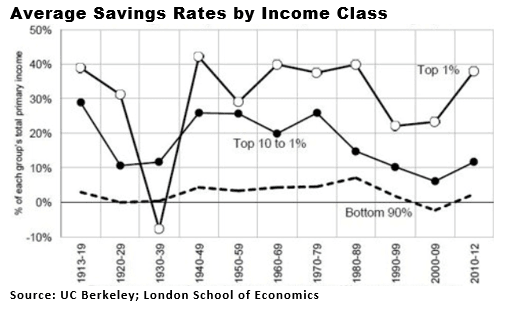 In addition, the Census Bureau also reports median household net worth for selected age groups of adults. You can see the results below. 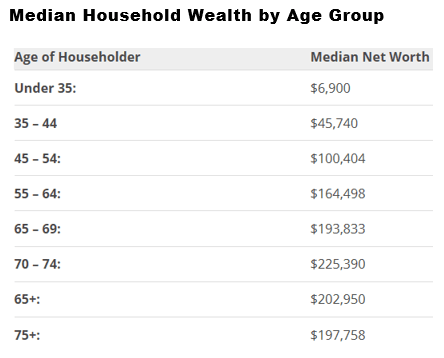 I include this chart only to make the following points. First, the highest median net worth figures are concentrated in those Americans 65 and older. These folks are not the primary drivers of the economy, since they are largely beyond the “accumulating” phase of their lives.

Second, the figures for all age groups shown above include an estimate of their home equity (although it is not clear how home equity is determined). The point is, many homeowners have  refinanced their mortgages in recent years to access the equity in their homes, and that money has presumably already been spent.

Both of these factors reinforce the point that the economy is not about to boom. Yes, 2.5%-3.5% GDP growth looks likely to continue in 2018, barring any negative surprises, but that may be as good as it gets.

Here’s yet another reason to believe the economy will not boom this year. Outstanding credit card debt in the US exploded in the second half of 2017, coinciding with the big jump in consumer confidence.

Earlier this month, the Federal Reserve reported that US consumer credit rose by the most in 16 years in November. Total credit rose by $28 billion, at an 8.8% annual rate, in November versus the pre-report consensus of $18 billion. That followed a rise of $20.5 billion in October. Data from retailers suggests that December saw yet another huge increase in consumer credit. 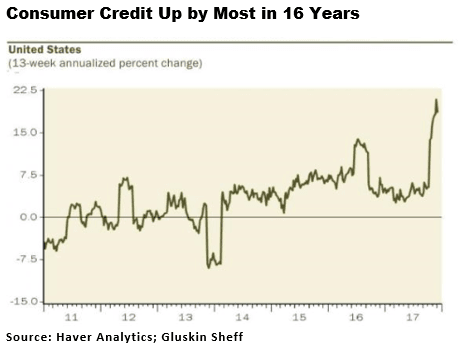 While household wealth is climbing on the heels of higher home prices and record stock values, the risk to the economy is that consumers with fewer assets may have to temper their spending until debt loads become more manageable.

While many Americans believe they have a good handle on their credit card debt, all it takes is one emergency to go from feeling their debt is manageable to being in over their heads. The fact is that credit card debt is almost never truly manageable.

Credit card companies charge exorbitant interest rates on outstanding balances, some in excess of 20%. The Fed reported that the average monthly balance for borrowers who cannot pay their balance is $9,600. At a 15% interest rate, which is on the low side, the borrower would be paying $1,440 in interest every year.

This explains in large part why millions of Americans can’t pay off their credit cards. Even worse, many of the largest banks that issue credit cards are reporting a significant increase in write-offs for nonpayment in recent months. See article on this in the links below.

And let’s not forget the 44 million Americans who are paying off student loan debt which has now soared to almost $1.5 trillion. The average Class of 2016 graduate has $37,172 in student loans and an average monthly payment of $351. These 44 million people are not generally in a position to help goose the economy either.

Conclusions: For all the reasons stated above, I do not believe the US economy is headed for 4%-5% growth this year as some are now predicting. Barring any negative surprises, I do believe the economy can grow at 2.5%-3.5%, especially with the tax cuts kicking in.

Special Report: We recently sent out Why You Should Have Real Estate in Your Portfolio, which makes the case for why it is important to have some real estate exposure in your portfolio. Real estate is not highly correlated with the stock markets, which is very important now, with the stock markets at record highs, and many believing a correction is likely in the not-to-distant future.

Real estate also offers many other potential benefits, including providing a hedge against inflation, several tax advantages as well as a source of income. We have several ways to access real estate in your portfolio, with professional management and reasonable minimums.

If you would like to learn more about how real estate is important to have in your portfolio, download Why You Should Have Real Estate in Your Portfolio.