I did a back of the envelop valuation here: Sand Report

Sandstrom (“Sand”) is a royalty and streaming company. Essentially, it is a capital allocation business where management must have the technical expertise to analyze the asset/property, the mining team, and its financial strength to be assured of a decent return on its capital. If the asset has problems like lower gra

des than expected, higher capital costs and/or management of the company that owns the asset fails to operate or be able to finance (other than Sand’s royalty/stream), then returns fall or vanish for Sand.
I look at Sandstorm as a senior-secured bond with variability and optionality because of the possibility of exploration upside on its properties. Even if a company owns the property/asset where Sandstorm has a royalty claim fails, SAND’s royalty claim does not go away.
What is the company worth?
I split the company into two parts: currently cash flowing assets and development assets that won’t produce for at least four years. I checked with the IR person to segment the assets that will not produce within the next four years.

If I deduct the 70 cents from the current price of $5.25 as of Jan. 16th 2018, then I would be paying $4.55 for the cash producing assets. I will give zero value to the 100 or more exploration properties that Sandstorm has. I consider them “free” options since I have no way of valuing them other than seeing what Sandstorm paid—which can be difficult to even assess since many purchases come in combined packages of cash, warrants and stock.
What is the cash flow? This is fairly simple: 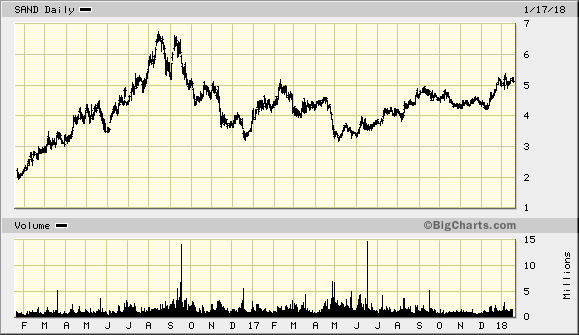 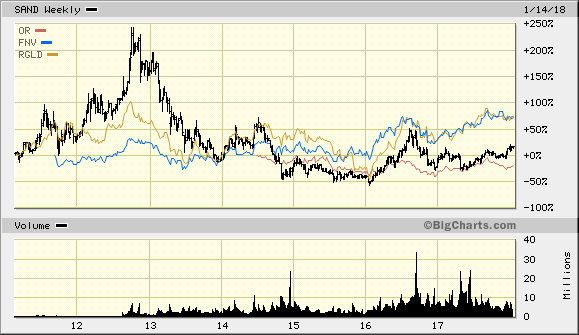