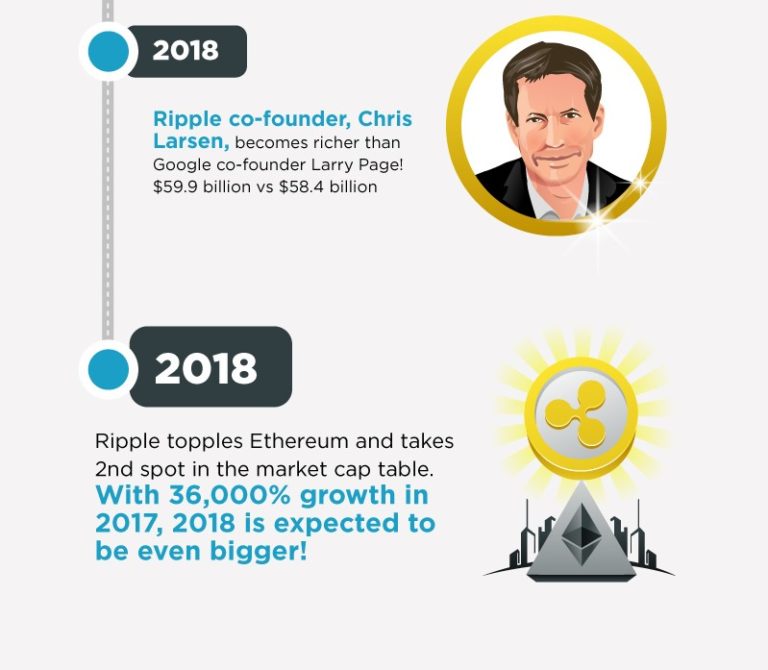 Ripple has grown by over 36,000% in 2017, this is revealed by BuyRipple.com’s new infographic, which shows the history or Ripple, from the beginning! Ripples impressive payment network and protocol behind it has announced several partnerships throughout the year, all of which has contributed significantly to the price reaching its current summit of $3.84.

This payment system is hugely innovative and will likely send shockwaves through the financial sector. Overcoming hurdles in its infant stage, Ripple has now grown into a major player in the cryptocurrency space. For a brief period it managed to stop the monopoly by bitcoin and ethereum, by taking the second spot in the market cap table.

With a total of 100 billion XRP coins, the company itself owns 61.3% of those, leaving the remaining 38.7% for the general public to trade as they wish. This gave the Ripple company its largest market capitalisation on January 5th of $235.4 billion and actually meant that the co-founder, Chris Larsen, was worth more on paper than both Larry Page and Sergey Brin, the co-founders of google.

One of the largest benefits to using the ripple payment system over the likes of ethereum and bitcoin is its settlement time. Currently it takes about four seconds for a transaction to be settled, which is considerably quicker than ethereum and bitcoin, whose times are two minutes and over an hour respectively. Financial powerhouses such as UBS and Santander have adopted the ripple payment system because speed is important in the financial industry.

"Despite Ethereum taking second spot back from Ripple, we feel that Ripple will likely be one of two cryptocurrencies to de-throne bitcoin at the top of the market cap table. Should Coinbase launch Ripple, we believe a price of $10 is realistic initially, with $25 likely by the end of 2018."