ValueWalk
Home Economics Report: China Not To Overtake US Economy Until 2032, But Is China... 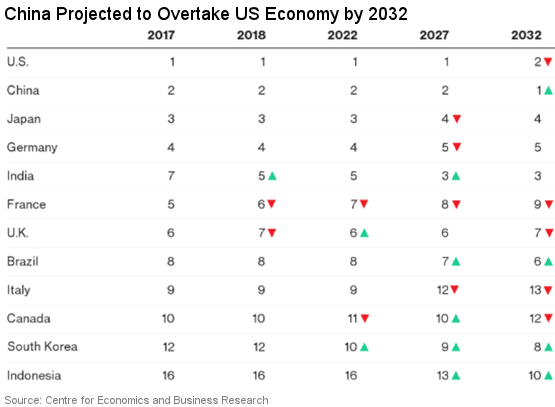 Let me begin today’s letter by wishing everyone a Happy New Year! Without your continued support, this E-Letter and Halbert Wealth Management would not exist. Thankfully, our assets under management have continued to grow in recent years.

Our stable of investment strategies at HWM has never been more diversified than it is today. In the last few years, we have significantly expanded the scope of the investments we recommend, including several successful strategies that do not involve stocks or bonds.

If you are one of those that are concerned about the stock markets’ record high levels, you should definitely consider these “alternative” investments. Also, as you will learn shortly, we are about to introduce three very successful strategies that deal in real estate, a first for us.

The point is, we continue to expand our roster of investment strategies to meet the needs of sophisticated investors in these increasingly complex markets -- including programs that have the potential to do well in rising or falling markets.

Given that, I would suggest that you make a New Year’s Resolution to at least consider some of the alternative strategies we recommend at Halbert Wealth Management just ahead. My Investment Consultants do not work on commission, so there is never any pressure to invest.

And we have clients all across America, the majority of which I have never met in person. So it doesn’t matter where you live. We would love to be of service to you! Just give us a call at 800-348-3601 to see how we can help you.

With that abbreviated sales pitch out of the way, let’s move on to our topics for today.

Barring any major negative surprises, 2018 looks to be a good year for the US economy, for jobs, for wages and for new innovation. I will get more specific on these topics in the next few weeks. Today, we need to revisit China and a new report which predicts how soon the “Middle Kingdom” will overtake the US as the world’s largest economy.

Rounding out today’s discussion, I’ll explain “chained CPI” which replaced traditional CPI in the new GOP tax reform bill. Whether you agree or disagree with this sneaky change in how inflation is calculated, you need to know about it. I’ll explain as we go along today.

Report: China’s Economy Will Not Overtake US Until 2032

I pointed out that while China’s population is 1.4 billion versus our 323 million, its annual GDP is only $11.2 trillion versus our $18.6 trillion. I also pointed out China claims that its economy continues to grow at a 6% annual rate are almost certainly false, and that its real growth rate is widely believed to be only 2-3% in recent years.

My point was that China’s economy is not going to surpass the US economy for a long time.

Today we will take a look at the latest report from London’s Centre for Economics and Business Research (“CEBR”), which is one of the world’s leading forecasting groups on global business and demographic trends.

The CEBR predicted last week that China will not match the US as the world’s largest economy until 2030, at the earliest, and will not surpass the US as the world’s #1 economy until 2032 – if current economic and demographic trends continue. Over that same period, the CEBR predicts that India will rise from the 7th largest economy in 2017 to the 3rd largest by 2032, thus surpassing France and the U.K. as you can see below.

The CEBR report also said Russia is poised to drop from 11th place to 17th place by 2032 due to its excessive reliance on oil exports. The report downplays recent developments in Russia’s manufacturing and high-tech sectors, stressing that declining global energy prices will be the main reason for the projected deterioration.

According to CEBR’s latest annual World Economic League report out last week, cheaper [inflation-adjusted] energy and technology prices will drive economic expansion in the countries of the Asia-Pacific region in the coming decade. These factors will also provide an economic boost to Indonesia and South Korea, and both will expand into the world’s 10th and 8th largest economies, respectively, by 2032.

This comes amidst the rise of high-tech manufacturing and the financial services sectors in Asia, making the region’s urban areas increasingly prominent economically. These developments will make Asian economies larger in US dollar terms; however, the future of the dollar remains uncertain amidst the pivot to economic nationalism in the US.

All the economies on the CEBR list are measured in dollar terms, as our currency remains the main means of international settlements and therefore, a universal measure of consumer purchasing power and a country’s overall economic well-being.

The CEBR notes that by 2032, five of the 10 largest economies will be in Asia, while European economies are falling down the ranking and the US loses its top spot.  They conclude that technology and urbanization will be the most important factors transforming the world economy over the next 15 years.

Caveat: Economic studies such as the one cited above which span 10-15 years must be viewed with a grain of salt, so to speak. They are interesting in terms of spotting trends, but there are just too many variables that can change over such an extended period, especially with technology advancing so quickly.

Another reason that such studies must be viewed with some skepticism is that many, including the CEBR report cited above, do not factor in a recession in the period shown. I suspect that most, if not all, of my readers would agree we’ll have at least one recession between now and 2032.

Finally, as I wrote in detail on December 5, there is growing evidence that China’s juggernaut economy may be in the process of peaking, so there’s no guarantee that it will eclipse the US as the world’s largest economy by 2032.

Most Americans, I suspect, are not familiar with the term “chained CPI” which is an alternative to the traditional Consumer Price Index (CPI). The difference is that chained CPI calculates inflation as growing more slowly. If applied to government benefits or Social Security, as some have suggested over the years, chained CPI would mean reduced growth in benefits payments.

Why do I bring this up today? The recent Republican tax reform plan which President Trump signed into law just before Christmas relies on chained CPI to measure inflation. While the tax reform bill and its chained CPI don’t apply to Social Security, this is a significant milestone as it could affect other benefits programs before too long.

Inflation indexing is critical to your wallet. Because prices go up year over year, the government compensates by raising federal benefits to match changes in the cost of living. The government also indexes tax brackets annually, in line with inflation. If it didn’t, the purchasing power of your benefits would erode over time, and because inflation corresponds to wage increases, you would hit higher tax brackets faster.

Over the years, some experts decided that traditional CPI over-measures inflation. They came up with chained CPI, which adds the concept of “substitution.” For example, if the price of beef spikes, a shopper may choose to purchase lower-cost chicken instead. That individual’s cost of living didn’t increase, technically speaking; they just shifted purchases to fit within a budget.

If you do the math on all these substitutions, you get a chained CPI that’s typically between 0.25% and 0.35% lower annually than traditional CPI.

Proponents of chained CPI say it’s a way to help balance the federal budget in that entitlement payments would not rise as fast as with traditional CPI. That might be true but it assumes the government wouldn’t spend the savings on other things – and that’s a big assumption!

President Obama proposed switching to chained CPI for Social Security cost-of-living adjustments back in 2013 during the ill-fated debt ceiling negotiations, but the Democratic opposition forced him to give it up.

In any event, chained CPI now immediately applies to the tax code. According to the Joint Committee on Taxation, the new chained CPI will increase taxes by almost $130 billion over the next 10 years (other estimates are even higher). The Tax Policy Center estimates chained CPI will cost taxpayers another $500 billion in the decade after that.

I’m all for cutting government spending, but you don’t do it by sneaking a new inflation measure into a tax reform bill! I just want to make sure my clients and readers are aware of this change.

China’s economy predicted to overtake US by 2032

What You Need to Know About ‘Chained CPI’

Between the Lines: American Life Expectancy Declines 2nd Year in a Row