ValueWalk
Home Info-Graphs How Rare Have Things Been? 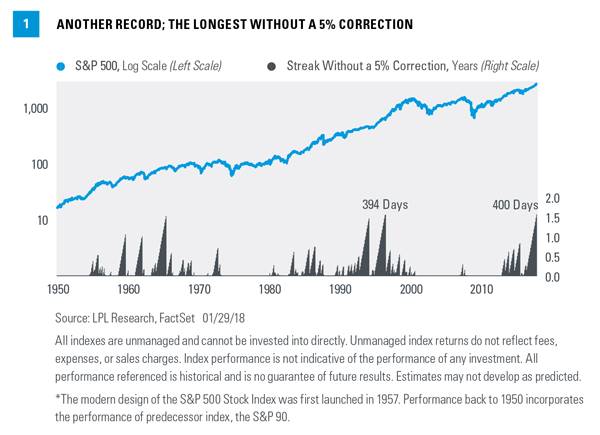 The equity market action over the past year is truly historic on many levels. It is important to recognize how unique this time frame has been and that a more volatile 2018 may be likely, and quite frankly normal. This week we will highlight some of the amazing streaks that have taken place, list a few of the reasons why we should anticipate a pickup in volatility, and explain how any possible weakness can provide suitable investors with an opportunity in diversified portfolios.

How Rare Have Things Been?

Below are five S&P 500 Index observations to illustrate just how unique the recent market activity has been:

Though good starts to a year can be a positive sign, that doesn’t mean the ride will be smooth. For example, since 1950, when the month of January finishes up 5% or more, the remaining 11 months have been higher 11 of the past 12 times; but during those years, the average intra-year maximum drawdown (peak-to-trough decline) has been 10.7%. In other words, this strong January for stocks could signal a continuation of the bull market but also more potential volatility as well.

*The modern design of the S&P 500 Stock Index was first launched in 1957. Performance back to 1950 incorporates the performance of predecessor index, the S&P 90.

For investors, it is always important not to confuse genius with a bull market. The historical lack of volatility can easily be accompanied by complacency, as various sentiment and fund flow indicators recently suggested. Although the market will always do what the market wants to do, we think the possibility for increased volatility is strong, and that several historical patterns may once again surface in the coming weeks or months. Take a look at three potential warning signs: 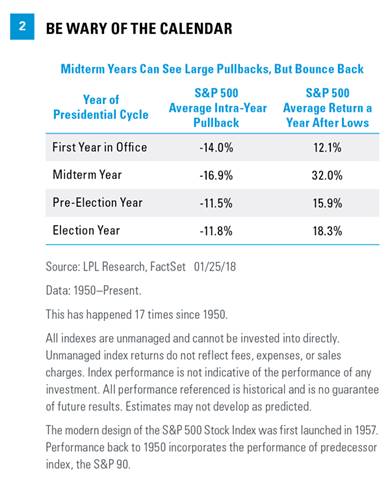 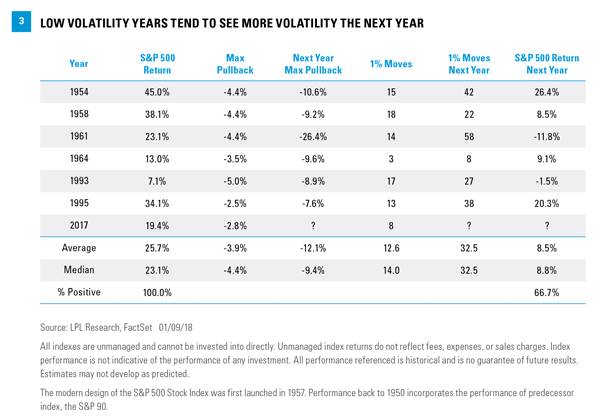 Stocks may experience more frequent — and larger — pullbacks in 2018 for these or possibly other reasons, such as geopolitical risk, an unexpected increase in inflation, or a sharp rise in interest rates. But the historical data cited above make a good case for buying dips in 2018 when they come.

The fundamentals support buying dips as well. Global economic growth is accelerating. Corporate profits are rising at a solid pace globally and U.S. profits should get a nice boost this year from the new tax law. As we get more clarity from corporate America about the impact of the tax law during the ongoing earnings season, the risk to our $147.50 S&P 500 earnings forecast for 2018 is to the upside.*

We continue to view any pullback as an opportunity to add, as rebalancing to target allocations is prudent for long-term portfolios. Despite the strong start to the year for stocks, and the S&P 500 approaching the upper end of our year-end fair value range at 2900, we still believe further gains may lie ahead. We maintain cyclical positioning in our model portfolios, including targeting small cap and value tilts.

The recent streak of market tranquility is one for the ages and we do not think it will continue much longer. This isn’t a bad thing, though, as any weakness could present an attractive buying opportunity for suitable investors. Buying the dips has been a prudent strategy during midterm election years historically, and throughout this bull market, while the macroeconomic backdrop is supportive, including accelerating global economic growth, strong earnings gains, and the impact of the new tax law. Bottom line, stay the course, look for further gains over the balance of the year, but be prepared for the possibility of a typical, yet bumpier ride.

Special thanks to Jeffrey Buchbinder for his contributions to this week’s publication.