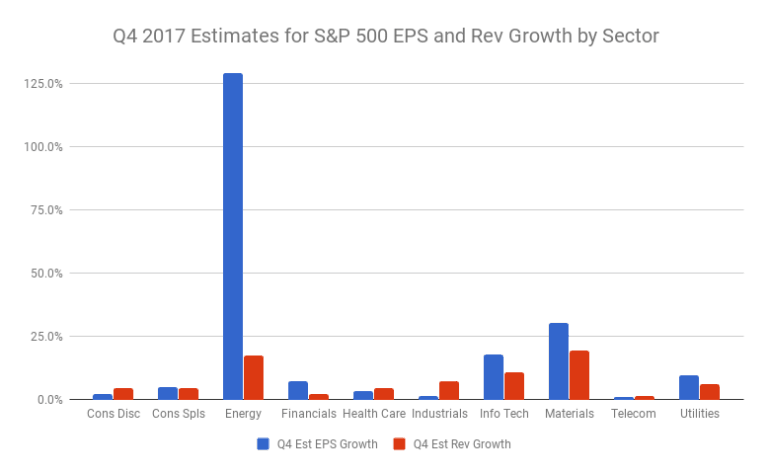 Things are about to get interesting this earnings season. The banks unofficially kicked off reporting on Friday with mostly good results. JPMorgan Chase (JPM) beat expectations on both the top and the bottom-line, driven by higher investment banking revenues, while equity trading revenues came in flat year-over-year (YoY), and fixed income, currency and commodity (FICC) trading fell 34%. On the flipside, Wells Fargo (WFC) missed earnings and revenue expectations and only reported very low single-digit increases in YoY growth on each metric. In other financials news, fellow commercial bank PNC Financial (PNC) and asset manager BlackRock (BLK) crushed estimates.

The S&P 500 is expected to show EPS growth of 11.0% for Q4, marking a return back to the double digit growth rates seen in the first half of 2017. However, with markets at all time highs, investors are expecting corporations to put up big numbers in order to justify current prices. With the stakes this high, it’s unlikely that merely meeting expectations will suffice.

With that said, leading and lagging sectors remain relatively the same as last quarter.

Energy is leading the pack right now with expected growth of almost 129% due to easier year-over-year comparisons. If you remove energy, index growth is almost cut in half to 6%, still above the 20 year historical average. Energy is expected to continue its upward climb in 2018, with Brent Crude oil prices hitting a 5 year high of $70 last week, shrugging off rising US rig counts.

Growth in Materials takes the second spot this season, for similar reasons. After struggling through a rough 2015 – 2016, the sector started to make a comeback last year and continues to improve, with EPS growth expected to come in at 30.2% and revenues at 19.6% led by the Chemicals and Metals & Mining industries.

Following materials, technology is expected to see the third highest growth rate of all the sectors with profit growth of 18.1% and revenue growth of 11%. All 10 industries within the sector are estimated to record positive numbers this quarter, led by Internet Software & Services and Semiconductors. It’s important to note that there is a big shake up coming to the Global Industry Classification Standards (GICS) that may impact tech’s high growth rate starting in the third quarter of this year. Internet Software & Services includes two big FANG names, Facebook (FB) and Alphabet (GOOGL). On Thursday, S&P Dow Jones Indices and MSCI said they would be renaming the Telecom Services sector to the Communication Services Sector, and would expand it to include these two names, as well as FANG counterpart Netflix (NFLX), and Comcast (CMSCA).

This brings us to our biggest loser for the quarter, which come September may be one of the biggest winners. Telecom Services is only expected to see EPS and revenues increase 1.5% and 2.0%, respectively. It currently stands as the S&P 500 sector with the least number of constituents at only three, and is the second smallest sector in regards to market cap which only stands at $1.8T.

What to Watch in Q4 Statements

It goes without saying that corporations will be mentioning newly passed tax reform in their press releases and analyst calls, and likely adjusting guidance accordingly. Many have already accounted for a one time repatriation tax between 8 – 15% that will impact fourth quarter results negatively. Big banks lowered expectations as a result, with the likes of Goldman Sachs (GS) saying it would knock $5 billion off of their bottom-line in the final quarter of the year. Expect to see similar charges from companies with large portions of cash overseas, such as Apple (AAPL) and other big tech names.

While there is no doubt that a lower tax rate will equal larger profits for US corporations, there is some debate about how long that benefit will last. Strategists at Bank of America Merrill Lynch recently argued that the new tax law would likely only be helpful in 2018, and may infringe on earnings growth thereafter. They argue this because higher profits and more favorable tax laws would increase competition therefore eating into margins, especially at a time when a number of industries (retail especially) are facing heightened instances of disruption. Another reason is that the Federal Reserve could speed up interest-rate normalization to a pace for which the economy is not ready.

With tax reform comes the expectation that companies will start sharing how they plan to put those savings to work. While US corporations have had an excess of cash on their balance sheets for several years now, most of that was used to buy back stocks, with share repurchases hitting record levels in 2015 – 2016. However, now investors want to see new CAPEX and R&D announcements. So far it appears there is a long list of corporations committing to increase CAPEX in the new year, mostly in the form of raising employee wages, and they come from all sectors: Airlines: American Airlines, JetBlue, Southwest, Telecom: AT&T, Comcast, Banks: BofA, Wells Fargo, Fifth Third, Consumer: WalMart, Fiat.

Last week, CEOs from over 100 of the country’s largest corporations urged congressional leadership to to pass legislation by the end of this week that would protect DACA recipients. Companies included  IBM, Facebook, Amazon, Apple, as well as GM, Under Armour and BlackStone. The Cato Institute estimates that if DACA expires it could result in a $215B hit to the economy.

This week 28 companies are scheduled to report from the S&P 500, mostly from the financials.