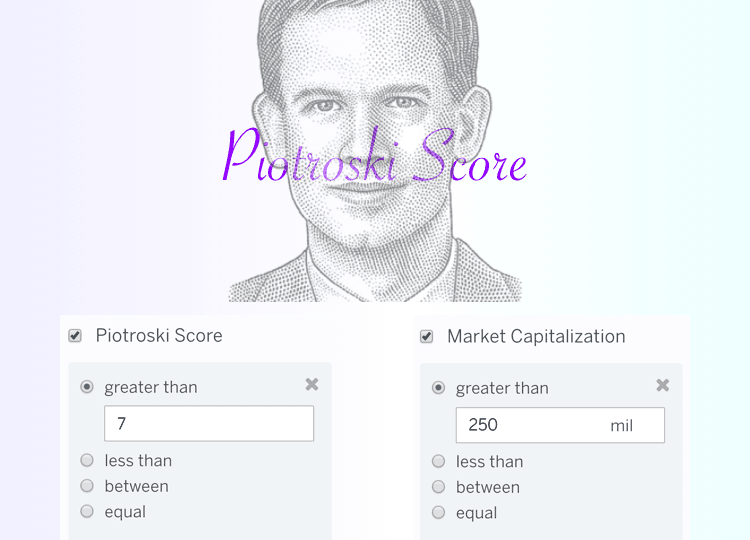 A long/short strategy that screens for stocks based on a checklist generated a return of 92.3% over the last year. I updated the screen and found 16 stocks to buy and 8 stocks to short in 2018.

Joseph Piotroski is likely an unfamiliar name to most investors. You won't find him on CNBC touting his latest stocks picks or disclosing his holdings with the SEC each quarter via 13F filings. Joseph Piotroski is a Stanford accounting professor and his students simply describe him as "a good teacher: smart, serious and approachable."

So why should investors know about Joseph Piotroski? Because in early 2000, he published a paper in the Journal of Accounting Research titled "Value Investing: The Use of Historical Financial Statement Information to Separate Winners from Losers."

In his paper, Piotroski developed a set of rules to find companies with strong liquid balance sheets, increasing profitability, and operating efficiency. He proposed screening for stocks based on a checklist that awards one point for each matched criterion. In his famous paper, Professor Piotroski explained that,

"an investment strategy that buys expected winners and shorts expected losers generates a 23% annual return between 1976 and 1996."

The 23% annual return was 7.5% higher than what the S&P 500 posted over the same period. Okay, but does this strategy still work today?

Does The Piotroski Strategy Still Outperform?

On August 1st 2016, I published an article that featured 10 Stocks With a Perfect Piotroski Score.

I used this F-Score stock screen to find companies included in the Russell 1000 index (IWB) that scored perfectly on Piotroski’s test. There were only 10 companies (or 1%) that passed all nine checks. The companies and their stock price performance to date are shown in the table below.

Using the same screen, I had found 6 companies that passed fewer than 2 checks. These companies and their stock price performance are shown in the table below.

If you had followed Piotroski's advice and bought the expected winners and sold short the expected losers in an equally weighted portfolio (same dollar amount for each long & short position), you would have earned an enormous 92.3% return. This is well above the 30.6% return of the Russell 1000 and S&P 500 over the same period.

The calculations are illustrated in more detail in the table below.

It appears that the Piotroski stock screen still delivers Alpha in this sizzling bull market. In light of this, I decided to create another screen to find which stocks to buy and which stocks to short in 2018.

I, again, used the F-Score stock screen to find companies included in the Russell 1000 index (IWB) that scored perfectly on Piotroski’s test as of January 24th. There were only 16 companies (or 1.6%) that passed all nine checks.

Using the same screen, I found 8 companies that passed fewer than 2 checks. These companies and their stock price performance are shown in the table below.

Carnival Corp (NYSE: CCL) went from a perfect 9 / 9 to less than 2 in just a year's time. It will be interesting to see how the company's shares perform this year.

In conclusion, the F-Score is a strategy many investors should consider as it continues to outperform the market. However, this investment strategy isn't for the faint of heart or novice investor. Make sure you have the necessary trading experience and capital when utilizing it. It is important to fully understand the Piotroski stock screen and its limitations.

How To Calculate The Piotroski F-Score

The following criteria make up the nine-part checklist.

Debt / Total Assets measures how much of the company's assets are financed with debt. This criterion intends to filter out companies that are taking on debt to finance operations because of shortfalls in free cash flow.

Return on Assets represents the dollars in Net Income a company generates per dollar of Assets. This criterion filters out companies that are not profitable.

This criterion filters out companies which have negatively trending ROA.

Gross Margin is expressed as a percentage and calculated as Gross Profit / Total Revenue. Gross Margin is a strong indicator of pricing power. This criterion intends to weed out companies that may be coming under pricing pressure from competitors.

Current Ratio measures whether a firm is capitalized with enough assets to pay its debts over the next twelve months by comparing a firm's Current Assets to its Current Liabilities. This criterion attempts to weed out companies that diluted shareholders.

Diluted shares measures the number of shares that would be outstanding if all possible sources of dilution (employee stock options, convertible bonds, etc.) are exercised. This criterion attempts to weed out companies that have decreasing working capital efficiency.

Operating Cash Flow (OCF) can be found on the Statement of Cash Flows reported by the company. OCF measures the amount of cash generated by a company's normal business operations. No company can operate indefinitely with negative Operating Cash Flow. This criterion filters out companies that need cash on the Balance Sheet or outside cash infusions to operate.

Management is highly motivated to manage Net Income to appease Wall Street. Operating Cash Flow is less susceptible to management manipulation. This criterion attempts to filter out companies that may be engaging in this type of practice.

Assert Turnover represents the dollars in revenue a company generates per dollar of assets. It is calculated as Total Revenue / Average Total Assets.

Asset Turnover is typically used to gauge the efficiency of a company and its management at deploying capital for assets that generate revenue. This criterion tries to weed out companies that have declining asset efficiency.