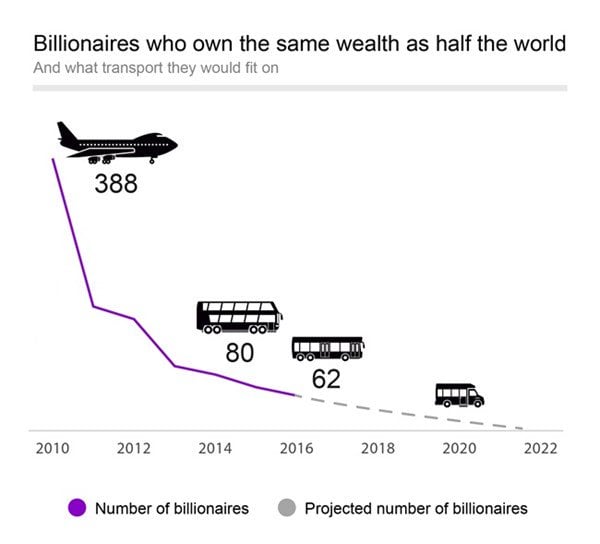 The so-called international “charity,” Oxfam, recently published its latest report on global inequality, pretentiously titled “Reward Work, Not Wealth.” In the report, Oxfam not only regurgitates all the same economic fallacies we’re used to — chief among them, the labor theory of value and the notion that wealth inequality is a problem to be solved — but it goes on to make dangerous and authoritarian recommendations to governments on how they should respond to this supposed “inequality crisis.”

It has been repeated over and over again, but seemingly to no avail: Poverty, not inequality, is the problem.

Inequality is something that comes about naturally, as a result of different skills, desires, and circumstances. Where it is induced by force or fraud, it is usually manifested in destitution rather than a mere absence of parity.

Inequality even comes about when everyone is getting richer. The example of Hong Kong comes to mind, where inequality is apparently high, but poverty unknown. As the economic conditions for Hong Kong residents improve, the rich’s increase in wealth may well be greater than the poor’s increase in wealth, but that does not mean the poor aren’t getting wealthier.

Inequality is meaningless in the context of welfare and prosperity. Politically, however, inequality has become the quintessential “cheat code” in the hands of the political class. When government programs fail to alleviate poverty – as they always will – inequality is an easy scapegoat to point to.

Too Few or Too Many Billionaires?

Oxfam should decide what its angle is going to be.

Oxfam is among that cabal of non-government organizations that love the much-touted slogan that the world’s wealth is increasingly being concentrated in the hands of fewer and fewer people. This was a central aspect of its 2016 report, released last year, titled “An Economy for the 99%.” In this year’s report, however, Oxfam cites research that 2017 saw the biggest increase in the number of billionaires in human history; “one more every two days,” the charity claims.

But rather than celebrating the fact that its 2016 findings have been reversed – with 61, rather than 8, people now holding as much wealth as the poorest half of the world – Oxfam condemns the fact that there is now a dramatic increase in the number of billionaires around the world. It considers this phenomenon as indicative of “extreme wealth,” no doubt a play on the notion of extreme poverty, a problem that must be ended.

Either wealth is increasingly being concentrated in the hands of fewer and fewer people – as Oxfam’s scary graph below from 2016 indicates – or, as Oxfam reported this year, there has been a substantial, indeed unprecedented, increase in the number of billionaires. Oxfam should decide what its angle is going to be: that more people are getting richer quicker, or that fewer and fewer people have an opportunity to get rich.

The report makes another incredible claim: globally, billionaires’ wealth increased by $762 billion in 12 months. According to Oxfam, this “huge increase could have ended global extreme poverty seven times over.” All the extreme poverty in the world!

Poverty isn’t eliminated by throwing money at the poor.

There is, of course, a massive problem with this claim. In 2011 alone, the United States government spent more than $668 billion on 126 welfare programs. $668 billion is nearly 88 percent of what is ostensibly required today to eliminate extreme poverty across the world.

Presumably, and implicit in the Oxfam report, however, poverty has certainly not been eliminated in the US. How is it that the United States government, with a fraction of the world’s (non-extreme) poor, is unable to completely eliminate poverty within its own borders when it has 87.6 percent of the resources needed to end extreme poverty globally seven times over?

The answer, of course, is that poverty isn’t eliminated by throwing money at the poor. This has been tried. According to Michael Tanner at the Cato Institute, the United States has spent nearly $15 trillion on welfare since the War on Poverty was declared by Lyndon B. Johnson in 1964. South Africa spends 6.4% of its GDP on basic education — one of the highest in the world — yet in a 2016 assessment, South Africa placed 39th out of 39 countries for the performance of ninth graders in science. “Few countries spend as much to so little effect,” noted The Economist in January 2017.

Poverty is ended through employment, savings, and, crucially, a political environment conducive to economic freedom and economic growth; not by throwing money at the problem. Thankfully, on the up-side totally ignored by Oxfam, global extreme poverty has fallen dramatically over recent decades. It is likely that extreme poverty will be eliminated within the current generation. This won’t satiate Oxfam, however, because it concerns itself with the rich, not the destitute.

The most worrying aspect of the Oxfam report — intellectual dishonesty aside — are its recommendations to governments around the world.

This is social engineering at its most obvious.

Among a laundry list of state-centric suggestions, Oxfam calls on governments to “use regulation and taxation to radically reduce levels of extreme wealth, as well as limit the influence of wealthy individuals and groups over policymaking.” It is safe to assume that Oxfam excludes itself — an extremely wealthy lobbying organization, having received over $244 million from governments alone between 2015-16 — from those groups that need limiting. It further advocates that governments should set targets “for the collective income of the top 10% to be no more than the income of the bottom 40%.”

Worryingly, it ambiguously asks governments to implement “policies to tackle all forms of gender discrimination, promote positive social norms and attitudes towards women and women’s work, and rebalance power dynamics at the household, local, national and international levels.” Positive social norms? Rebalance power-dynamics in the household? This is social engineering at its most obvious. We should be vigilant about supposed charities pushing governments toward violating property rights and personal liberty.

It is high time that Oxfam be reduced to irrelevancy, at least as far as public policy goes. Its dodgy methodology, nit-picking of facts, and ideological commitment to the non-problem of inequality – at the expense of the very real problem of destitution – make it an intellectually dishonest player in policy advocacy. To the extent that Oxfam still engages in charity work, we must wish it all the best of luck. But solving poverty will not come out of its recommendations; instead, it will only yield more despair and tyranny.

Martin van Staden is Legal Researcher at the Free Market Foundation of South Africa and the Academic Programs Director of Students For Liberty in Southern Africa. He has a law degree from the University of Pretoria and is a Young Voices Advocate.