ValueWalk
Home Economics The Only Benchmark Of Wealth 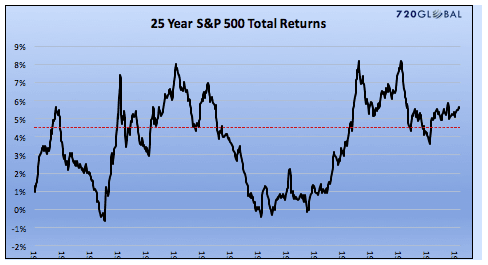 The New England Patriots are the winningest professional football team of the new millennia. While one could post a long list of reasons for their success, there is one that stands above the rest. In a recent interview, Patriots quarterback Tom Brady stated that they start each year with one goal – win the Super Bowl. Unlike many other teams, the Patriots do not settle for a better record than last year or improved statistics. Their single-minded goal is absolute and crystal clear to everyone on the team. It provides a framework and benchmark to help them coach, manage and play for success.

Interestingly, when most individuals, and many institutions for that matter, think about their investment goals, they have hopes of achieving Super Bowl-like returns. Despite their well-intentioned ambitions, they manage their portfolios based on benchmarks that are not relevant to their goals. In this article, I introduce an investment benchmark that simplifies the tracking process toward goals, which if achieved, provide certitude that one’s long-term objectives will be met.

Almost all investors benchmark their returns, manage their assets and ultimately measure their success based on the value of a stock, bond or blended index(s). The most common investor benchmark is the S&P 500, a measure of the return of 500 large-cap domestic stocks.

But the performance of the S&P 500 and your retirement goals are unrelated. The typical counter-argument claims that the S&P 500 tends to be well correlated with economic growth and is a valid benchmark for individual portfolio performance and wealth. While that theory can be easily challenged over the past decade the question remains: Is economic growth a more valid benchmark than achieving a desired retirement goal? Additionally, there are long periods like today where the divergence between stock prices and underlying economic fundamentals is grossly askew. These variances result in long periods when stock market performance varies greatly from economic activity.

Even if we have a very long investment time frame and are willing to ignore the large variances between price and valuation, there is a much bigger problem to examine. Consider the following question: If you are promised a consistent annualized return of 10% from today until your retirement, will that allow you to meet your retirement goals?

Regardless of your answer, I am willing to bet that most people perform a similar analysis. Compound current wealth by 10% annually to arrive at a future portfolio value and then determine if that is enough for the retirement need in mind. Simple enough, but this calculus fails to consider an issue of vital importance. What if inflation were to run at an 11% annual rate from today until your retirement date? Your portfolio value will have increased nicely by retirement, but your wealth in real terms, measured by your purchasing power, will be less than it is today. Now, suppose you were offered annual returns equal to the annual rate of inflation (the consumer price index or CPI) plus 3%.

Based on 2017 CPI of approximately 2% for a total return of approximately 5% compared to almost 20% for the S&P 500, many readers would be reluctant to accept such an “unsexy” proposition. Whether a premium of 3% is the right number for you is up for debate, but what is not debatable is that a return based on inflation, regardless of the performance of popular indexes, is a much more effective determinant of future wealth and purchasing power.

To show why this concept is so important, consider the situation of an investor with plans to retire in 25 years. Our investor has $600,000 to invest and believes that he will need $1,500,000 based on today’s purchasing power to allow him to live comfortably for the remainder of his life. To achieve this goal, he must seek an annualized return of at least 4.50%. As a point of reference, the total return of the S&P 500 was 6.60% over the past 100 years. At first blush our investor, given his relatively long time frame until retirement, might think the odds are good that the S&P 500 will allow him to achieve his retirement goal. However, his failure to factor in inflation causes his calculations to be incorrect. Since 1917, inflation has averaged 3.09%. The S&P 500 total return since 1917 net of inflation was only 3.51%. The odds are not in his favor, and his oversight may ultimately leave him in a difficult situation.

The graph below shows the resulting 25-year total returns based on each monthly starting point since 1917. The red line shows our investor’s goal of 4.50%. Keep in mind that since the graph requires 25 years of data, the last data point on the graph is December 1992.