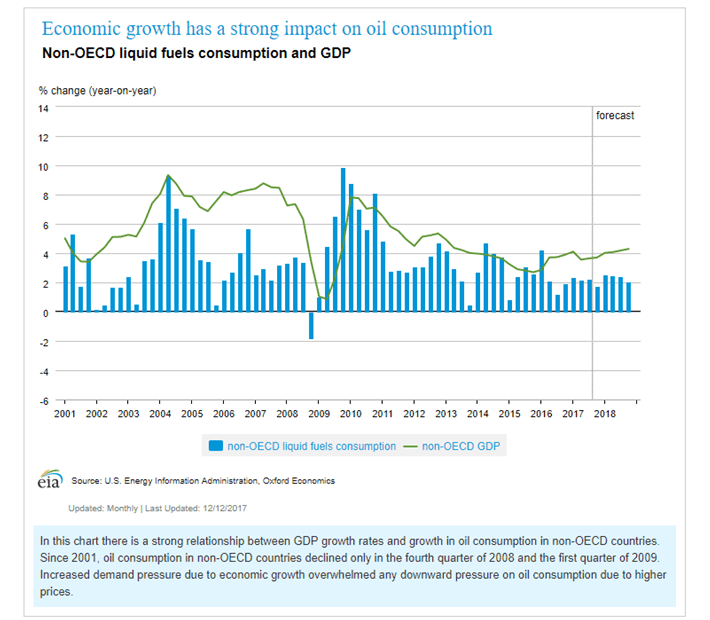 This is a guest contribution by Dirk Leach.

The last two and one half years has been good for most investors with the S&P 500 returning roughly 29% over that time frame.

However, returns in the energy sector over that same time frame were just short of abysmal.  This poor performance of the energy sector is tied directly to the price of crude oil which peaked in June of 2014 but dropped significantly through the remainder of 2014 and early 2015.

Using the Vanguard Energy ETF (VDE) as a proxy for the energy sector, the return over the last two and one half years was roughly -31%.  However, in 2018 and into 2019, I’m expecting to see a significant turnaround in both oil prices and share prices of those companies that explore for, drill for, produce, and transport crude oil.

While there are a number of drivers that can move the price of crude oil, the most important and reliable is economic growth.  As the global economy grows, consumption of transportation fuel increases and more petroleum products are produced and consumed.  This is particularly true for the non-OECD countries.

In the more developed countries (OECD countries), the correlation is weaker due to increased efficiencies in the transportation sector.  While electric vehicle (EV) usage has increased over the last decade, EVs only provide for a small fraction of total personal transportation miles traveled and  widespread EV adoption is still decades away.  There won’t be any material reduction on transportation fuel consumption in the next several years.

Both Goldman Sachs and Barclays are projecting global GDP growth at 4% for 2018, a pace not seen since 2011.  While Morgan Stanley is a bit more conservative with their projection at 3.8%, they are still predicting a very healthy rate of GDP growth globally.  This expected robust GDP growth will translate into higher consumption of petroleum and petroleum products.

Starting in November 2014, OPEC initially attempted to strangle US shale and other higher cost crude producers through allowing the surplus of crude production to suppress crude prices.  Several OPEC countries including Saudi Arabia increased crude production at this time to further suppress prices in their attempt to shake out the financially weak producers.  The effort was only partially successful in that a few very weak shale oil producers were pushed into bankruptcy and some longer term deep water drilling projects were shelved or cancelled.

But, after two years of crude prices between roughly $30 – $50, the prime US shale acreage was still producing with some companies having increased production during those two years.  In November 2016, OPEC changed course and set production quotas for its members that effectively cut production by 1.3 Mbpd to a total of 32.5Mbpd.

Readers should note that a number of non-OPEC producers are also participating in cutting oil production, most notably Russia and Mexico.  The success of the OPEC orchestrated production cuts has served to push the price of crude oil from the low $50 per barrel range to above $60.  These production cuts have also resulted in significant crude inventory draw downs extending into the winter season when inventory buildup would normally be expected.  The chart below shows US crude inventories at Cushing, OK quickly approaching the 5 year average after 2 years of inventory build.

As can be seen in the green 2016 trend above, late November and December saw a sharp build in crude inventory while in 2017 we are seeing a sharp reduction in inventory.  This, by itself, is a very bullish signal for future crude prices.

There are at least three other factors that are likely to have a positive impact on the price of crude in 2018.

Additional Factor 1:  The first is Venezuela’s falling production.  While Venezuela has extensive crude oil reserves, the current financial crisis in the country is having a negative impact on necessary capital expenditures for and maintenance of Venezuela’s state owned oil production facilities.  As a result, Venezuela’s crude production and exports have steadily fallen.

Bloomberg reports that not only has Venezuela’s oil production fallen, the quality of the crude produced and shipped to refiners has also fallen.  Venezuela produces a very heavy crude which must be blended with a lighter grade of crude before refining.  With Venezuela short on cash, import purchases of US light sweet crude for blending have fallen leading to the poorer quality of crude exported from Venezuela.  The projection for 2018 is that Venezuela’s crude production will fall to roughly 1.8 Mbpd.  If the country’s finances deteriorate further, which appears likely, Venezuela’s crude production could easily fall further.

Additional Factor 2:  The second potential factor is Saudi Arabia’s planned partial IPO of Saudi Aramco.  Aramco has, to this point, been operated strictly as a state owned oil company.  Deputy Crown Prince Mohammed bin Salman has plans for an IPO of up to 5% of Aramco in 2018 or early 2019 with the proceeds to be used to establish a sovereign wealth fund to help wean the country off of its near total reliance on oil revenues.  The price of crude oil and crude oil futures will determine the total value of the planned IPO.  If the price of oil remains low, Aramco and the partial IPO will be worth less.  Saudi Arabia desperately wants/needs the price of oil to be higher in order to have a successful IPO.  It is  safe bet that Saudi Arabia will be doing whatever it can to push the price of crude oil and oil futures higher in 2018.

Additional Factor 3:  The third factor potentially affecting crude oil prices is the current high leverage and debt load being carried by many shale oil producers.  While the two year drop in prices did not have the full intended impact on US shale oil production, it did result in a number of companies adding to the debt side of their balance sheets, challenging their bank imposed debt covenants, and/or dilution of equity holders via secondary offerings to raise equity capital.  In short, many companies in the US oil patch are suffering from a debt binge hangover and are not in a position to take on additional debt or equity financing to expand drilling operations and production.  That is not to say that production is completely constrained.  To the contrary, US shale oil production is growing and the lower 48 states output will likely hit 10 Mbpd in 2018.  However, that growth is somewhat constrained by the debt overhang many production companies are carrying.

Other Factors:  As is always the case, there are other potential geopolitical events that could serve to increase or decrease the price of crude oil.  For example, the Iran nuclear deal is not sitting well with the Trump administration and Iran is a continuing irritant to the US and our allies in the gulf region.  It is possible that we will see US imposed sanctions again against Iran and those sanctions would likely target Iran’s oil production and exports.  Libya, Syria, and Yemen are not stable and hostilities could impact oil production or tanker transport out of the gulf region.  With oil consumption and production having reached a balance (or possibly a deficit of production) and inventories dropping, it would not take much of a production impact to raise crude prices.

While it is possible to “get rich quick”, in practice it is pretty hard to do and there is always a large (or larger) downside risk.  I much prefer the option of getting rich slowly as it lets me sleep well at night.  So, I don’t trade futures and I limit my options trading to covered calls and cash secured puts to add a little income to my dividend stream.  Also, because the oil patch is a relatively volatile sector where a individual company’s earnings can turn sour very quickly, diversification is very important to maintain a healthy portfolio.  With those caveats, what are reasonable investment options in the oil patch for conservative investors?

Over the holidays, I spent quite a bit of time researching potential oil patch investments for 2018 and beyond.  I view these selections as long term investments and not short term trading opportunities.  For individual equities, I am invested in the following.

DCP Midstream L.P. (DCP) –  one of the largest producers of NGLs and one of the largest natural gas processing companies in the U.S.  DCP gathers and/or processes about 12 percent of our nation’s gas supply and has a large exposure to the Permian fields, arguably the most productive field in the lower 48.  This is primarily an investment in natural gas and NGLs.

Enterprise Products Partners L.P. (EPD) – Enterprise Products Partners L.P. is one of the largest publicly traded partnerships and a leading North American provider of midstream energy services to producers and consumers of natural gas, NGLs, crude oil, refined products and petrochemicals.  EPD is participating heavily in crude oil exports from the US out of its Texas terminals.

DCP, EPD, and PAA are primarily dividend income plays while FANG is clearly growth oriented.  Being retired and living on investment income means I need to generate a steady stream to pay the bills.  The MLPs listed above help me do that.  To get the level of diversification I wanted in the portion of my portfolio dedicated to the energy sector, I’ve turned to a mutual fund and an ETF from the Vanguard Group.  I’ve been investing with Vanguard for roughly 30 years and I’m very comfortable with Vanguard’s conservative culture and their low management fees.  Vanguard has the lowest management fees on their mutual funds and ETFs in the industry.

I chose the Vanguard Energy Fund (VGENX) and the Vanguard Energy ETF (VDE) for the bulk of my energy sector investments.  As I mentioned earlier, I’m much more comfortable sleeping at night and not worrying about my investments.  Vanguard provides me that level of confidence with the money I have under their management plus I get instant diversification within the sector.  I have always preferred actively managed funds over index funds.  It should be noted that while VGENX is actively managed, VDE is an index fund.  I have more of my energy sector funds invested in VGENX because of my preference for active management.

While I have a preference for the Vanguard Group funds, I recognize that there are other equivalent and maybe even better energy sector funds available to investors.  Because we are looking at a large sector with the potential to perform better in 2018, it is less important to pick “the” fund than it is to pick “a” fund that provides good exposure to the energy sector with reasonable management fees.  I view this opportunity as a case of “a rising tide lifts all boats” and the key to success here is being invested in the energy sector.

Article by Dirk Leach, Sure Dividend