A chart is simply a bunch of information put into visual form.  Certain charting techniques can help us to navigate the investment world.  We’re mostly looking at data from the United States because its economic size dwarfs other economies… even China is just considered an emerging market.  Remember the old Wall Street saying:  “When the U.S. sneezes, the rest of the world catches a cold.”

STOCKS:  This first chart shows a long-term view of the S&P-500, which is the generally used proxy for the stock market.  The current bull market is a long one, nine years so far.  It has been extra long simply because the prior economic-recession had been extra bad.  It started in mid-March of 2009.  MarketCycle has been bullish since April 2, 2009, two weeks off of the bottom of the Financial Crash and we have been bullish since.

The S&P-500 naturally wants to move up toward #5 on the chart below before any economic recession can begin (the move might look similar to 2013 & 2014?).  Any move like this would offer a nice profit.  Stocks up. 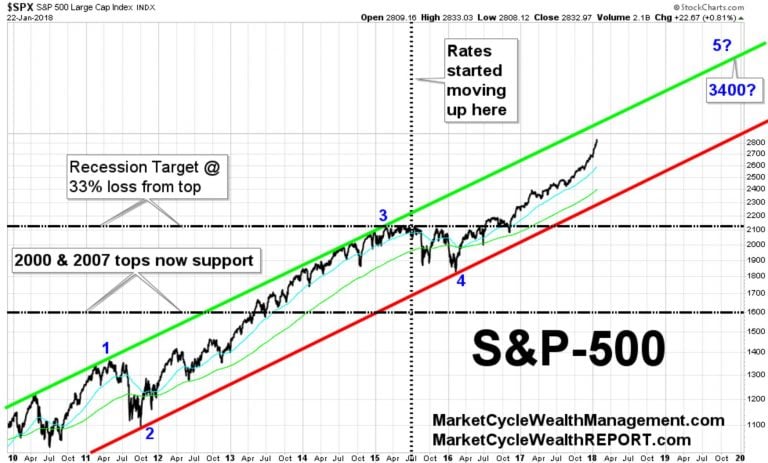 This next chart shows the ‘late-stage’ of the current bull market (past two years) and the shorter-term trend line that the market is remaining above.  Stocks up. 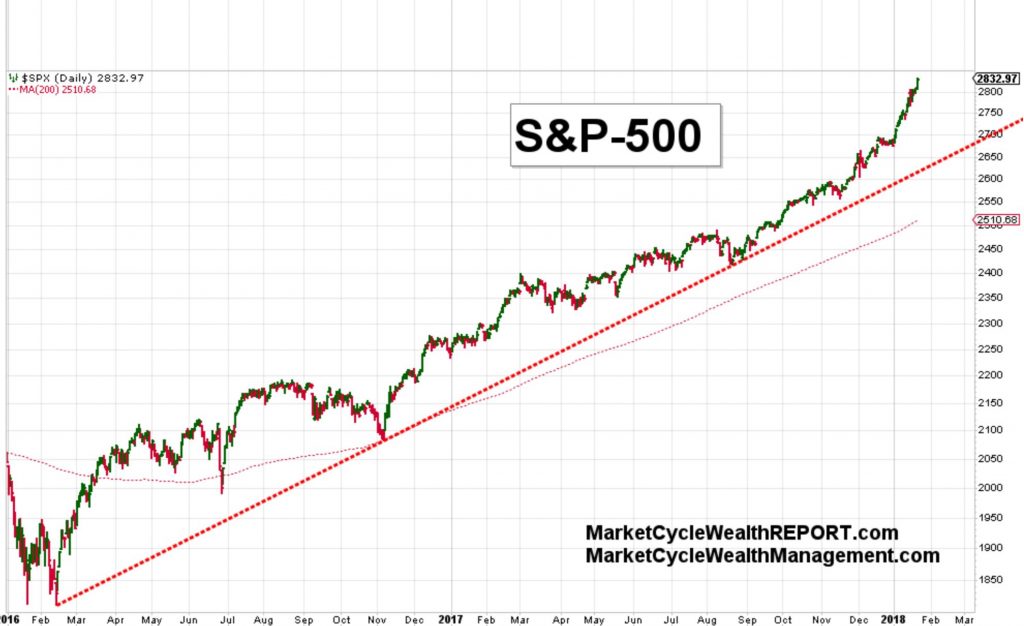 Goldman Sachs absolutely does NOT see a current ‘over-valued’ bubble in stocks:

There is a huge amount of money currently flowing from people’s cash holdings and from their bond holdings INTO stocks.  Stocks up. 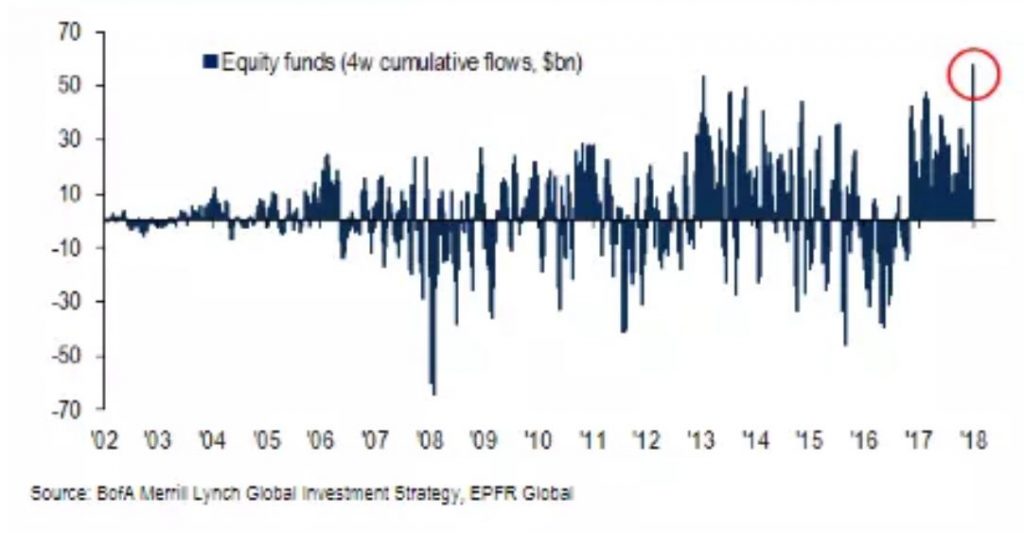 S&P-500 corporate earnings continue to grind higher.  Chart shown covers the past 7 years.  The direction (light blue) is up.  In addition, market breadth (internal strength of both price and volume) continues higher.  If you own a stock, like Amazon, it means that you are a partial owner of that same corporation; if you own an ETF, it means that you can hold ownership in multiple carefully selected corporations that have been all nicely bundled into one group trading package.  So, corporate earnings up = corporate stocks up = stock market up.

But the stock market is extremely euphoric as shown via MarketCycle’s proprietary take on the Hindenburg Omen.  Euphoria (shown via the red lines) usually results in a large and prolonged bear market within 1.5 years, however it very often first causes a strong bullish “melt up” period. 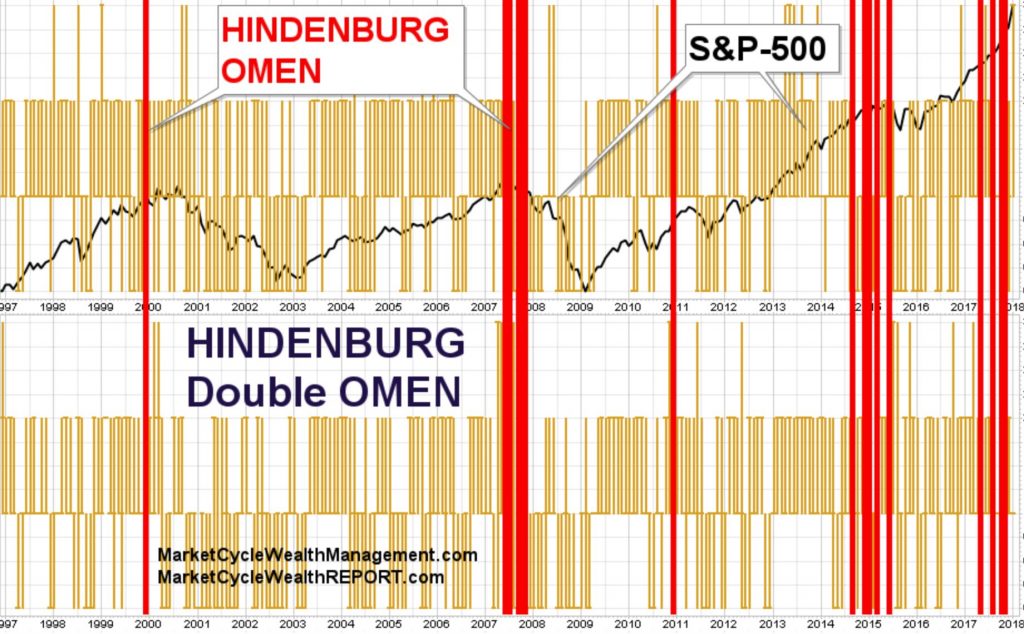 We have gone a record amount of time without a 5% pullback; we are due one.  I expect that with the extreme amount of bullish euphoria around the entire globe, any pullback will be a rapid “V” shaped and very temporary ordeal with further upside gains following: 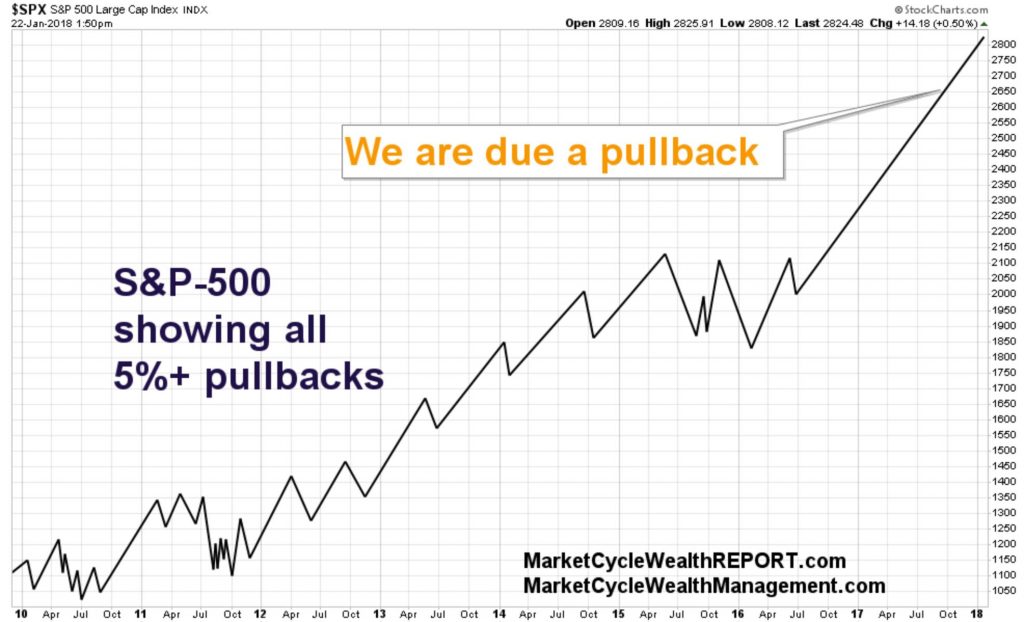 Viewed another way, since the very beginning of the universe, we have never gone this long without a 5% pullback.  Nothing bad has ever happened in the past when at these lofty levels, but rather, this is a clear sign of a “melt-up” (chart as of mid-January, 2018 and courtesy of Goldman Sachs): 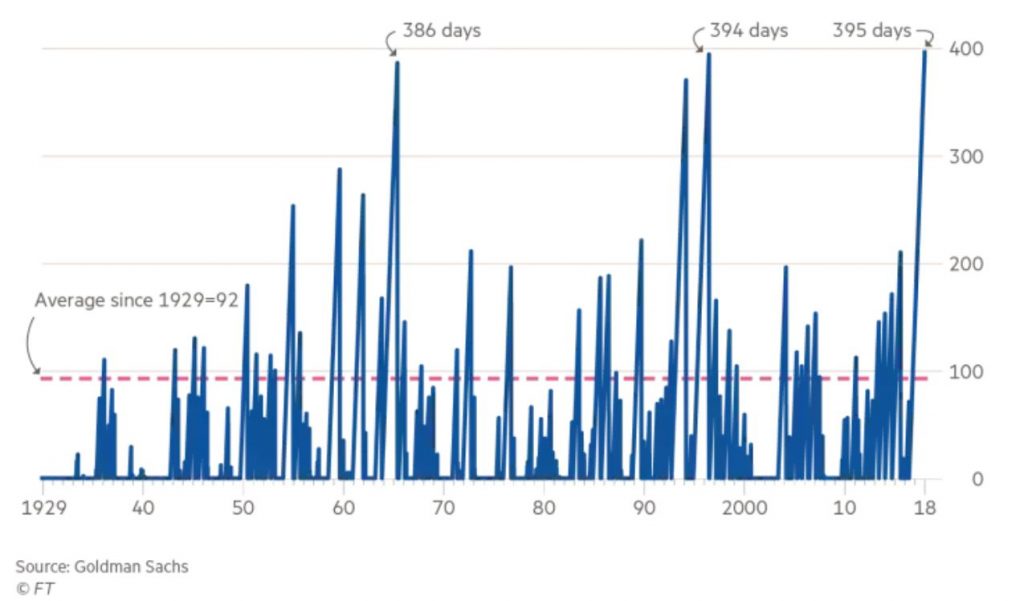 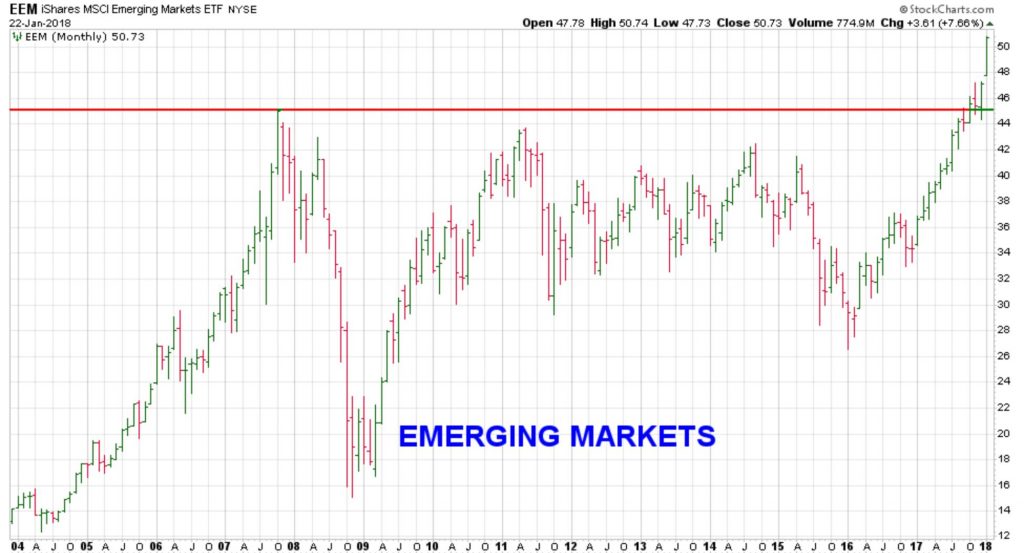 Oil prices have moved up above their overhead resistance.  Oil up.

BONDS:  U.S. bonds have been in a 35 year long bull market.  Investors have generally held portfolios that contain 25-50% bonds and this has helped to keep their portfolios afloat during bad periods for stocks.  This is coming to an end.  In the near-term, I expect bond prices to fall toward the red dashed line on this chart and then to eventually move much, much lower.  Bonds down. 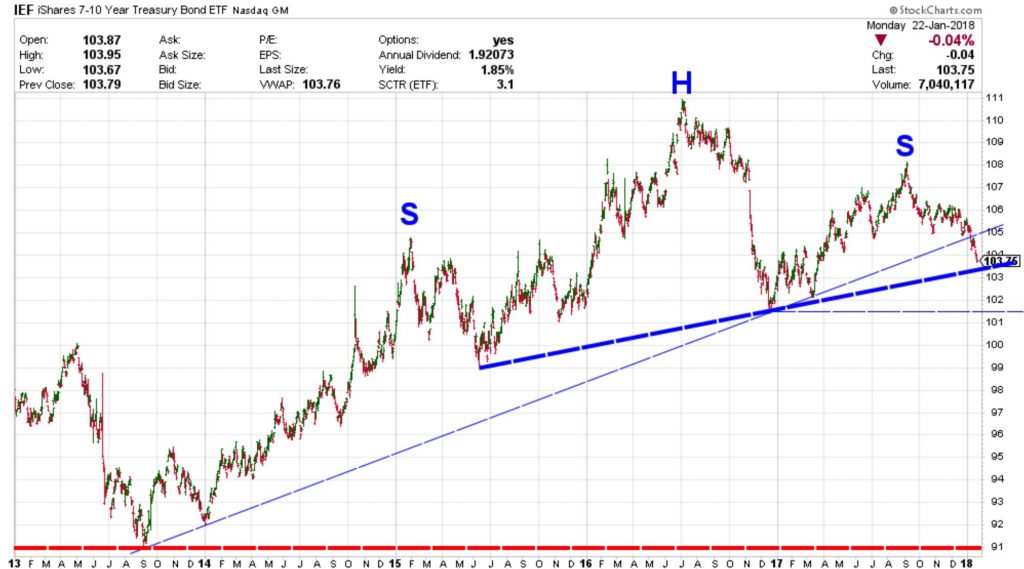 Inflation is moving up again.  The line on this chart shows the direction.  Inflation up. 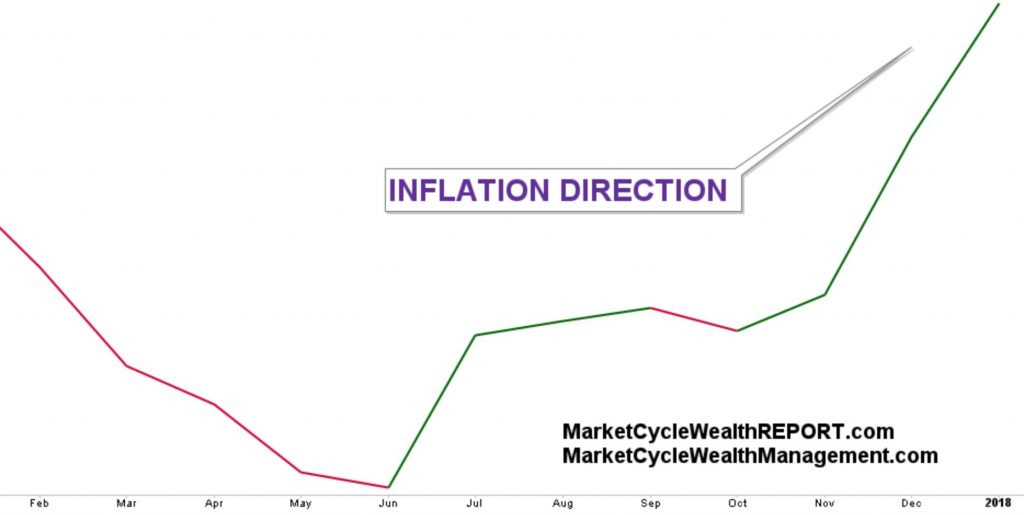 This next chart was taken off of the U.S. Federal Reserve website.  The Fed has begun looking at the Underlying Inflation Gauge rather than straight CPI to arrive at its inflation prediction.  It looks at a range between the brown and blue lines below.  Right now, inflation is between 2.2% and 3% with the 3% number being the more important of the two.  Inflation up. 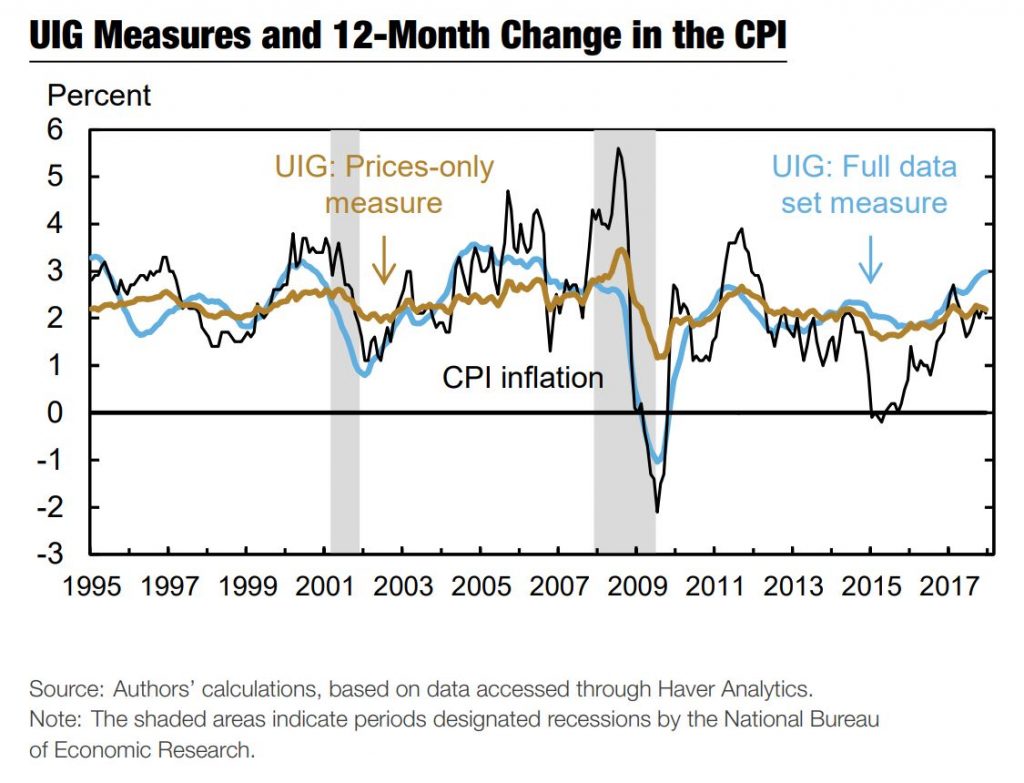 Inflation is coinciding with the rise in commodities and Emerging Market stocks.  Lumber gives us a good idea of what is happening to commodities.  Commodities up. 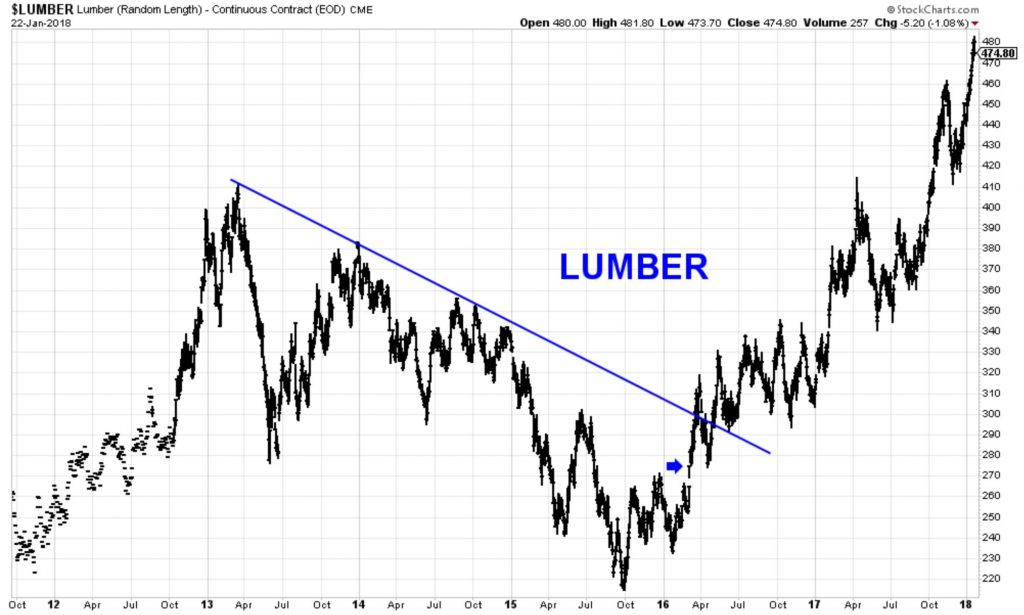 While the U.S. Dollar (USD) may fall a bit more in the short-term, rising yields plus coming tax changes and repatriation of the USD (and other factors) should help to keep the USD in a secular bull market when viewed over a very long time period of 10+ years.  People across the globe may benefit, over the very long-term, by holding their portfolios in USD.  The USD has broken above (and is holding above) its 35 year long support line.  IMO, the USD is likely to slowly gyrate higher for the next dozen years.  USD up. 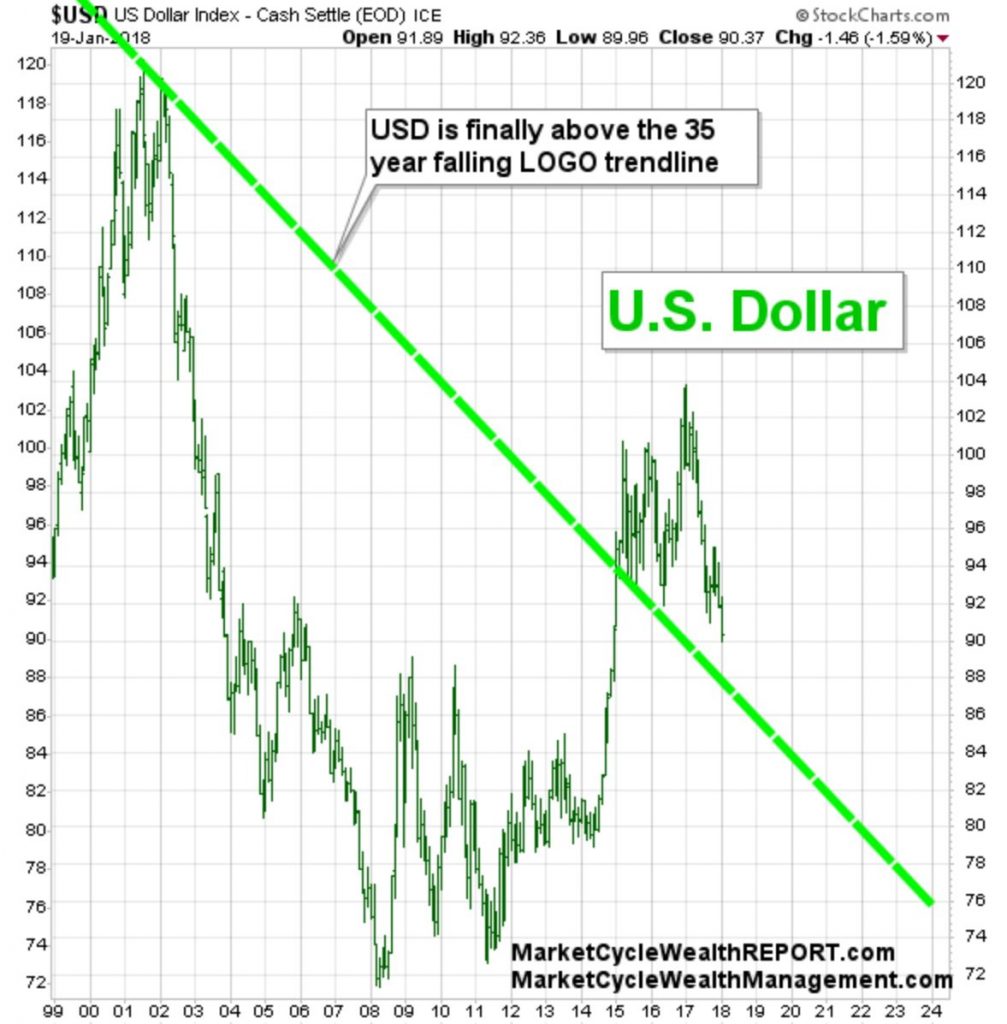 Finally, while I feel that Bitcoin will eventually die (although digital currencies of some type will survive) I still do feel that Bitcoin itself will thrive for a longer period.  In the near term, Bitcoin wants to move down toward $7000 (blue line) before going higher: 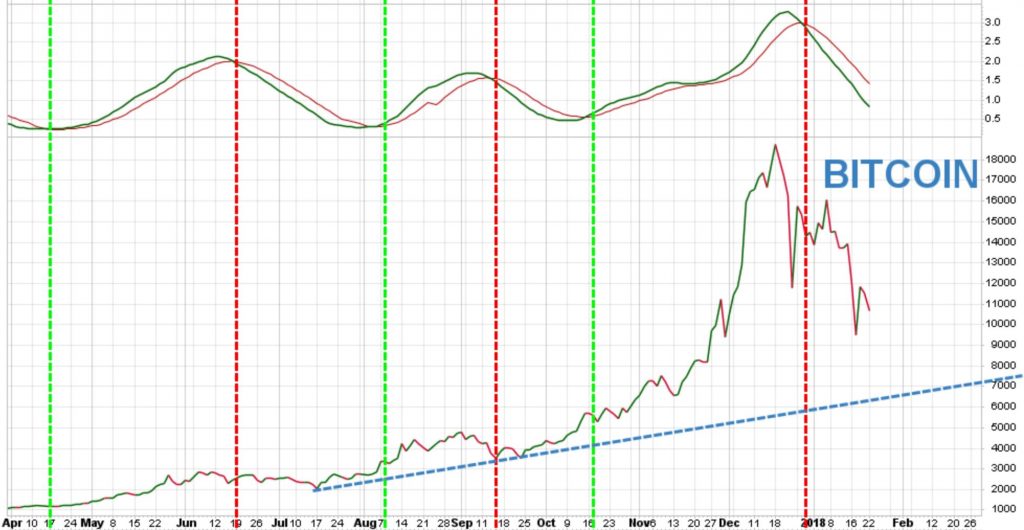 Goldman Sachs recently posted this funny cartoon, with their comment below: 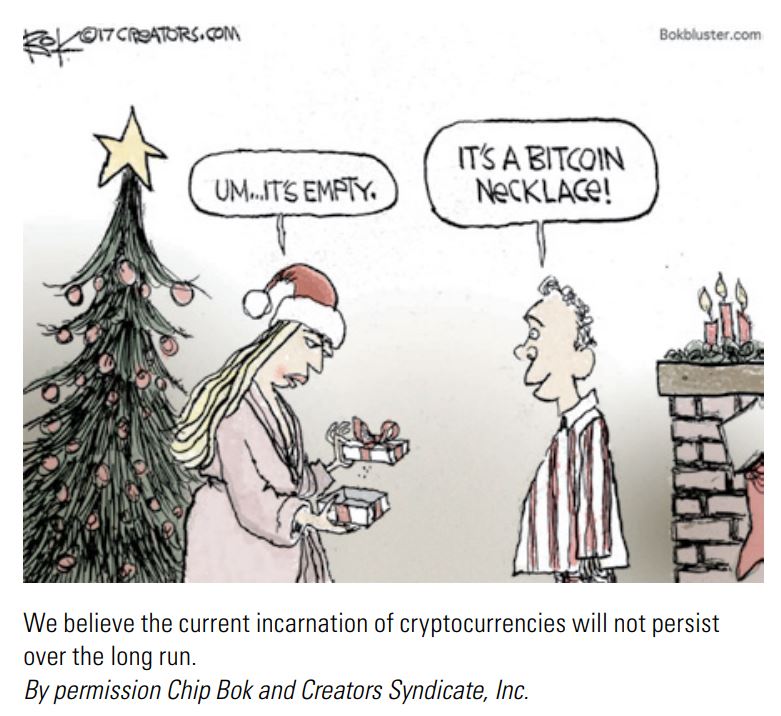 SUMMARY:  Solid bull market with possible prolonged ultra-bull melt-up.  We’re currently in the late-stage of the bull that started in the Spring of 2009.  During the late-stage, only certain assets perform well and it is more difficult to outperform the general market.  Bonds are performing poorly.  Commodities are picking up, as are Emerging Markets.  MarketCycle’s client portfolio profits have put an even greater distance between our portfolios and our comparison benchmarks during the month of January.  Portfolio performance will be shown again in April.  We have one goal:  To move the equity line, over time, from lower left to upper right.

Time for some humor: 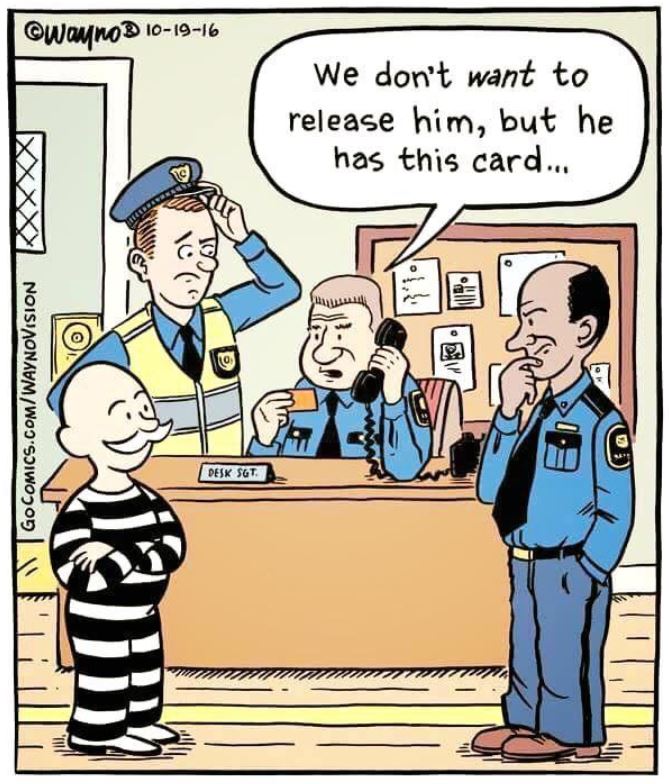 MarketCycle Wealth Management is in the business of managing investment accounts (globally) for a reasonable fee.  The first three months are at no charge.  We use sophisticated, proprietary techniques with the goal of avoiding the bigger market drops while outperforming during bull markets, sometimes by a lot.  We use ‘ESG’ socially-responsible investments whenever possible.  Please help us to spread the word.  We do not advertise.  No one knows unless you tell them.

Clients:  Tax documents will not be available until mid-February.  Every single year I am asked where the tax documents are for a client’s IRA type retirement account… but there are none generated since they are either tax-deferred or tax-free.