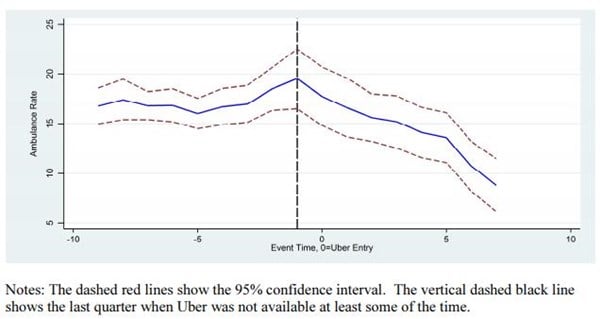 As a mode of transportation to a hospital when a patients’ illness, injury or affliction precludes them from driving, ambulances are a blunt method that is far from perfect. Patients sometimes find themselves hit with substantial bills or end up at out-of-network hospitals that raise the price of care. Recent policy changes may also be exacerbating the situation, as one study found that the Affordable Care Act slowed ambulance response times by almost 20 percent.

Some are foregoing ambulances and for ride-hailing services instead.

According to a new working paper by David J. G. Slusky of the University of Kansas and Leon S. Moskatel of Scripps Mercy Hospital, some people are foregoing ambulances and opting for ride-hailing services instead.

Ambulances Are Insufficient for All Needs

A person suffering from a heart attack could certainly require an ambulance complete with paramedics and their tools to give some medical care en route to the hospital. The minutes the ambulance could shave off transport times because it does not have to follow traditional traffic rules could prove important. But a recent Washington Post article cited one patient who was charged $3,660 for a four-mile ride in an ambulance.

While a traditional ambulance often makes sense, a person might need quick transportation to get medical attention in a range of less urgent situations. In some circumstances, these alternatives can offer a less expensive option, and also allow the patients to choose their hospitals.

Previous research had found that some degree of unnecessary ambulance use in the past was due to a lack of feasible alternatives.

The authors analyze the effect of UberX entry into 766 cities throughout the country from UberX’s inception in 2013 through 2015. They find at least a seven percent decrease in ambulance usage rates following UberX’s introduction in a city, and the drop is robust to a number of different specifications.

One possible explanation for the decline would be if UberX’s entry into cities followed a pattern and other underlying factors could explain the reduction. The authors map entry times in major US cities and find no obvious patterns by population, region, or other variable.

Patients with less urgent cases are choosing an alternative that is less likely to introduce unexpected costs.

Another possibility is that the introduction of UberX reduces the number of ambulance trips required by lowering the instances of drunk driving. However, the evidence on this channel of influence is mixed so far, and this subset of patients is unlikely to account for a substantial share of total ambulance trips.

More plausibly, patients with less severe or urgent cases are choosing an alternative that is less likely to introduce unexpected costs, while also offering them more convenience and control.

Some cases will always require ambulances, and the growing role of ride-hailing companies will not send ambulances the way of the horse and buggy. However, the study’s findings are another example of the ways in which the introduction of new platforms or technologies can have unanticipated results, and they can sometimes be salutary.

Individual lower-risk patients may benefit by opting to use a less expensive, more familiar mode of transportation. At the same time, reduced demand for ambulance trips could help rein in growing response times, as ambulances can concentrate more on cases of serious need.

The new dynamic could also alleviate some of the growth in this aspect of health care expenditures. The amount spent on ambulances in Medicare Part B was $5.8 billion in 2012, almost twice the amount spent a decade before. Recent investigations have found substantial instances of improper billing and use of ambulances in cases where it was not necessary. Lower-risk patients shifting from ambulance rides to some form of ride-hailing could save money and allow for ambulance resources to be directed more efficiently to the cases where they are needed most.

For less serious cases, an ambulance with all of the additional aspects and related compliance costs can be excessive.

Author David Slusky drew a parallel to providers, saying “you don’t need a neurosurgeon to diagnose strep throat.” In the medical transportation field, for less serious cases that just need to get to the hospital for care, an ambulance with all of the additional aspects and related compliance costs can be excessive.

Stakeholders from hospitals to insurers to city emergency departments have all expressed some interest in exploring ways to increase the scope for ride-hailing companies to provide options aside from expensive ambulatory transportation. In 2016 Washington D.C. considered using ride-hailing services for some of the lowest-priority calls, in an effort to free up ambulances in the face of an increasing volume of calls.

In the old framework, patients needing some form of emergency medical transport had few choices other than making use of an ambulance. For some lower-risk patients, ride-hailing options offer a lower-cost option without sacrificing speed or convenience. Shifting some of these patients away from traditional ambulance services could free up those resources for the most serious cases and reducing response times. Ride-hailing platforms could be helping to alleviate constraints in areas not previously thought of, in this case, medical transportation.

The extent to which ride-hailing services such as Uber can deliver benefits will depend in part on the details of how they are integrated, and it will be worth monitoring the deals being considered by the various stakeholders. For now, UberX and similar companies are reducing pressure on strained ambulance resources, and offering some patients a more affordable option.

Charles Hughes is a research associate at the Cato Institute.