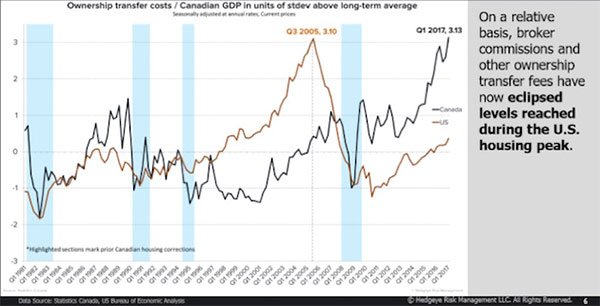 An excessively leveraged US housing sector triggered our last financial crisis and recession. Other factors contributed, but home mortgages and housing speculation were at the core.

So it’s easy to assume that the next crisis—whenever it comes and whatever causes it—won’t be about housing. That may not be right, though.

While US homeowners and lenders learned some hard lessons in the last crisis, and while I don’t see that kind of exuberance this time around in the US, I do see signs of it elsewhere.

Canada is the most obvious case, but also Australia and parts of Asia and Europe.

Imagine this: Rising interest rates and reduced foreign capital flows combine to push housing prices down in places like Vancouver. Leveraged players who own speculative homes start to liquidate their properties, pushing prices down further.

Banks find themselves holding properties they neither need nor want. The dominoes begin to topple.

So we might have another housing-driven crisis, but starting elsewhere. It would still affect the US, but differently from last time.

The housing sector has two characteristics that lead to these problems.

First, it’s highly leveraged. In the US, it’s common for people to buy houses with only 5% or 10% of the purchase price in cash, leaving the buyer instantly leveraged 10X or 20X. That’s asking for trouble, even if the sale price is fair, and it’s often not.

Price is the other rub. Houses are illiquid because transactions occur infrequently and each property is unique. They aren’t like shares of stock. You can look at tax valuations and appraisals, but those are estimates. You can’t really know a house’s value until you try to sell it.

Flying blind at 20X leverage is not the ideal way to learn about investing, but that’s how many Americans do it.

A Housing Bubble in Canada

Last week Josh Steiner of Hedgeye kindly sent me a slide deck he assembled on housing in Canada, Australia, and the US. It was a revelation. Consider the following chart.

Note the sidebar: On a relative basis, broker commissions and other ownership transfer fees have now eclipsed levels reached during the US housing peak.

Those fees are now 3% of Canadian GDP! Really? How is that producing anything other than income for brokers?

The two lines represent real estate transaction costs in the US (brown) and Canada (black), as a percentage of GDP. We see that the costs peaked in the US in late 2005, then fell rapidly the next couple of years as the economy tumbled into recession.

Canada was less exuberant at the time; but, post-recession, housing in Canada climbed far faster than it did in the US. By early 2017, Canadian homebuyers and sellers were spending as much on housing, relative to their economy’s size, as the US did at its 2005 peak.

Meanwhile, you have the Bank of Canada raising rates, slowly but surely. This seems like an ominous combo.

The situation in Australia is even crazier, at least as Josh describes it.

He works with an indicator that never occurred to me: crane count. The number of cranes operating in a city and the kinds of properties they are being used to build turns out to be a pretty good measure of housing activity.

The chart below shows the crane count for Australia’s four largest cities. As of three months ago, Sydney alone had 350 cranes being used to build high-rise residential properties.

That’s more cranes than were deployed in all of North America’s twelve largest cities. Construction is booming in Australia.

In fact, the comparison is even more stark. On a per capita basis, Australia has 14.6 times as many residential construction cranes working as North America does. 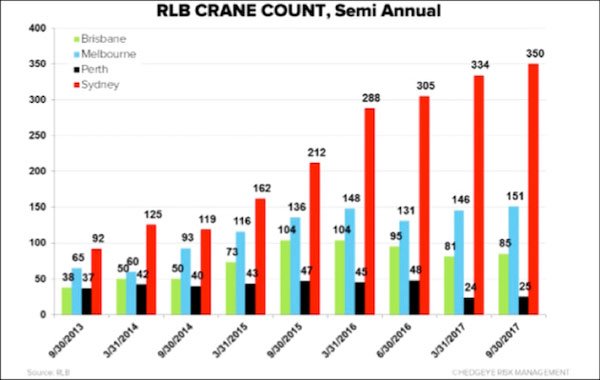 It gets crazier still. Australians engage in “negative gearing.” For tax reasons, people intentionally buy investment property that produces losses. We do that in the US, too, but we have ways to keep cash flow positive even as properties produce tax losses.

In Australia, investors get interest-only loans to buy properties, then rent them for less than the loan payments and absorb the difference. They think they will make it up by selling at a profit.

Josh Steiner describes it this way:

Negative gearing is (and should be) a truly bizarre concept to an investor, but it makes perfect sense to most Australians because home prices have only gone up for the last 25 years. There is a pervasive and genuine belief that they can’t lose.

If this is right (and I’m sure my Australian readers will tell me), it will likely end in disaster. But actually, I get why younger Aussies might think this way. Those under 40 have never seen a recession in their adult lives.

They have seen a resource-driven boom as Australia exported staggering quantities of raw materials to China. That incoming cash kept the country afloat even as others sank. It’s easy to think that condition is normal if you’ve never known anything else.

Good times never last forever… which brings us to China.

People have been predicting Chinese real estate crashes for years. Eventually they will be right. Is that time approaching? Here’s the lead from a January 16 Wall Street Journal story, “China’s Hot Housing Market Begins to Cool.”

BEIJING—China’s housing market has defied gravity and government restraints for two years, floating on a tide of bank loans and speculation. Until now.

In Beijing and Shanghai—two of the country’s largest markets—and other megacities, sales have stalled and prices have dropped, falling slightly in some pockets and dramatically in others.

Demand has dried up in these areas as a result of government measures, including higher mortgage rates, higher down-payment requirements, and limits on buying a second or third home. Would-be sellers are increasingly putting plans on hold in hope that prices will rebound.

That doesn’t sound good at all. WSJ backs up the gloomy language with data, though: 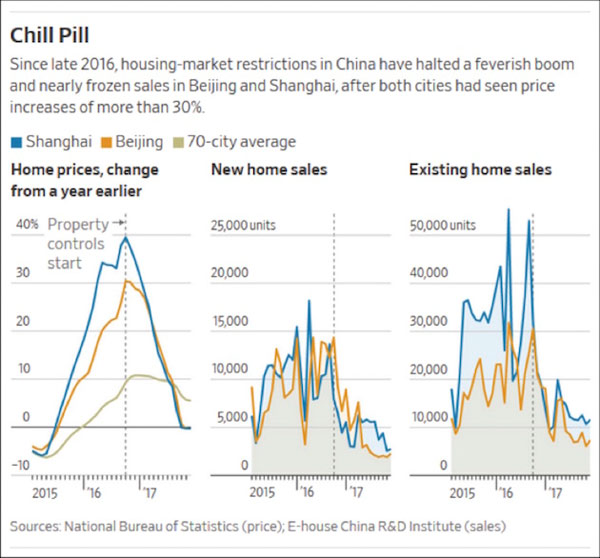 Some of this shake-out is happening by design, as the government tries to manage growth on a sustainable path. The picture also varies greatly by city and region. Beijing and Shanghai are China’s equivalents of Washington and New York—except they are much, much larger.

What happens to them affects the whole country to some degree—and other countries, too.

By some estimates, China’s property market accounts for a third of GDP growth. Falling construction activity will mean less need to import construction materials from Australia—and maybe fewer Chinese buyers in Canada. Falling demand won’t be good for housing prices in either of those places.

Then there are wild cards. President Trump has so far held back on promises to crack down on trade with China, in part because he wants Beijing’s help managing the North Korea issue. I doubt he will wait forever.

He has a lot of latitude to impose tariffs, quotas, and other restrictions on China. Ironically, a peaceful resolution on the Korean Peninsula might be economically negative if it removes a barrier to trade war.

We haven’t even talked about housing in the UK or in Europe. London home prices are crazy and have been so for years. Ditto for many places in the EU. The European Central Bank is still accommodative for now, but it won’t be forever.

Between higher rates and fewer oligarchs buying mansions, Europe could see trouble, too.

As I said earlier, the housing market is inherently opaque. We can look around and see craziness everywhere, but it can get crazier still. Calling the top is hard. It took a couple of years for the US carnage to become obvious last time.

I don’t foresee imminent disaster, and it’s possible these international markets will deflate gradually and not spark a crisis. But given the propensity of central bankers to overplay their hands, the risk is significant.