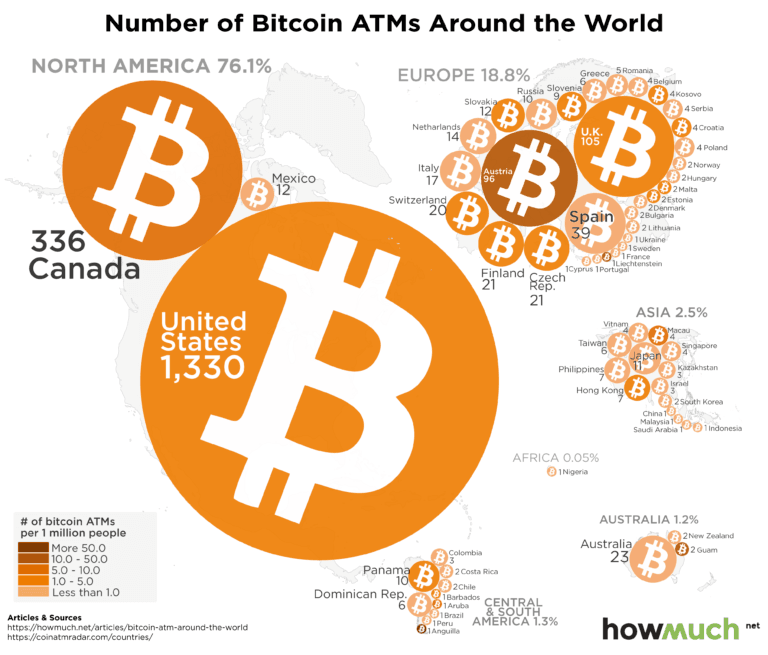 Bitcoin ATMs allow consumers to exchange their cash for Bitcoins, and vice versa. Although the Bitcoin machines are not ATMs in the more traditional sense that we are accustomed, these kiosks are connected to the internet in order to accept cash deposit, exchange for Bitcoins or send Bitcoin to a public key on the blockchain. However, fees to using Bitcoin ATMs are known for being excessive. The Consumer Financial Protection Bureau (CFPB) says that “they may also charge high transaction fees – media reports describe transaction fees as high as 7% and exchange rates $50 over rates you could get elsewhere.” However, the high fees have not slowed the growth of crypto kiosks popping up around the world. We decided to take a deeper look into the world’s Bitcoin ATM supply.

According the visual, the United States is home to greatest number of Bitcoin ATMs with 1,330 machines. However, Austria has the greatest concentration of Bitcoin ATMs per million people, which makes the country have some of the greatest accessibility to crypto funds in the world. With that said, North America dominates the Bitcoin ATM market, which accounts for 76.10% of the world’s cryptocurrency machines. Europe is home to the second most Bitcoin ATMs in the world with 18.80% of the total market. As Asian governments have continued to crackdown on cryptocurrency with imposing bans or strict regulations, the continent has fallen to the third largest region with 2.50% of the Bitcoin ATM market.

In the future, Africa will likely adopt Bitcoin ATMs as the continent further discovers the potential benefits that could help unlock economic growth. Cryptocurrency still remains in its early stages and it will likely take some more time before we start seeing further growth in the number of Bitcoin ATMs within the region.

Here is a breakdown of the chart, based on each continent’s percentage of the world’s Bitcoin ATM market share:

Overall, the total number of Bitcoin ATMs doubled in 2017. As of the end of 2017, there were more than 2,000 operational machines across sixty countries. On average, there were five new cryptocurrency ATMs installed each day last year. While the United States may have the most Bitcoin ATMs, Austrians that have the greatest access to these crypto machines. By having the greatest concentration of crypto ATM machines, Austria serves as a stand-out model on how to increase adoption and accessibility to cryptocurrency funds.